W&L’s Contact Committee Presents ‘Late Night’ Host Seth Meyers The virtual event will be held on Sept. 24 at 7 p.m. and is open to the W&L community 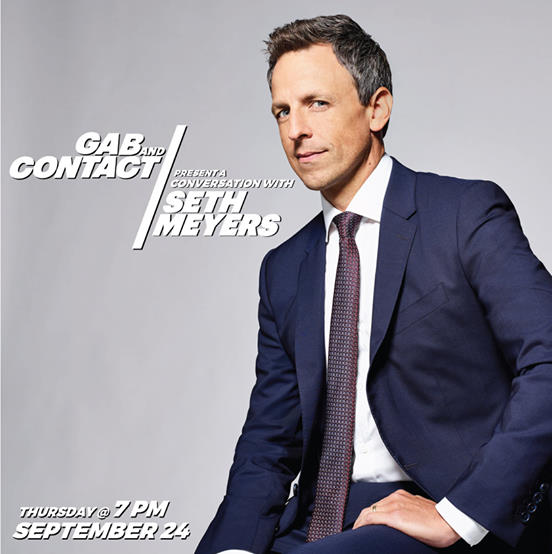 Washington and Lee University’s Contact Committee and General Activities Board present an evening with Seth Meyers, Emmy Award-winning writer and the host of NBC’s “Late Night with Seth Meyers!” The virtual event will be held on Sept. 24 at 7 p.m. and is open to the W&L community, including parents and families. The conversation will be moderated by Alecia Swasy, Donald W. Reynolds Professor of Business Journalism.

Interested W&L community members are encouraged to sign up early and save their virtual seats by registering at go.wlu.edu/sethmeyers. Viewers can also submit questions in advance through the online registration form.

Meyers hosted the 66th Primetime Emmy Awards in 2014 and was Emmy nominated in 2017 and 2018 for Outstanding Writing for a Variety Series. In 2018, he hosted the 75th Golden Globe Awards, which was Emmy nominated for Outstanding Variety Special. In addition, Meyers was named one of the 2014 TIME 100, a list of the magazine’s 100 most influential people.

A graduate of Northwestern University, he studied and performed at iO Theatre before moving on to the Boom Chicago Theater in Amsterdam, Holland. His acclaimed show “Pick-ups and Hiccups” with partner Jill Benjamin toured Europe and eventually caught the eye of “Saturday Night Live.”

In 2001, Meyers began his television career with “Saturday Night Live” (SNL), where he served as head writer for nine seasons and “Weekend Update” anchor for eight. In 2011, Meyers won the Emmy for Outstanding Original Music and Lyrics for host Justin Timberlake’s musical monologue. In all, Meyers has garnered 20 Emmy nominations for his work in television.