W&L’s Department of Music Presents the University Singers in Concert Feb. 27 The program will feature a variety of works from Centuries of Psalms to modern music to traditional American folk songs. 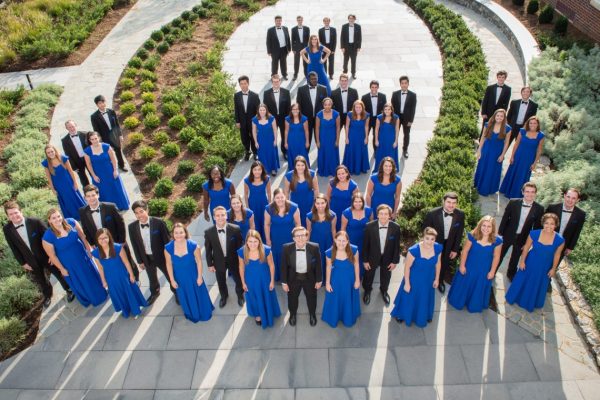 The Department of Music at Washington and Lee University presents the award-winning University Singers under the direction of Shane M. Lynch in concert on Feb. 27 at 8 p.m. in the Wilson Concert Hall, Lenfest Center for Performing Arts. Tickets are free but required. Call the Lenfest Center box office today at (540)-458-8000 to reserve tickets.

The tour program will feature a variety of works from Centuries of Psalms, to modern music, following the life and death of a soldier, to traditional American folk songs and other audience favorites.

During the concert, three themed sets that cover a full portion of the choral spectrum will be presented.

Traveling through multiple pieces with song and movements, the University Singers will follow a soldier through war, with his thoughts and those of them around him—his mother, his friends and his adversaries—through the horrors of war.

The final set of the program will provide the concert audience with many toe-tapping favorites, including The Limelighters’ “There’s a Meetin’ Here Tonight” and Rosephayne Powell’s “Still I Rise,” ending with W&L’s traditional “Shenandoah” by James Erb.

The University Singers are recognized as one of the finest collegiate a cappella choirs on the East Coast, and tour nationally or internationally every year, performing a wide variety of literature at major venues across the globe while serving as artistic ambassadors for the university.