Jim Farrar ’74, secretary of the university and senior advisor to the president at Washington and Lee University, gave the keynote talk at the university’s annual Alumni Reunion Weekend Opening Assembly on May 2 in Lee Chapel. He spoke on the topic of “Being There.”

The event kicked off the weekend, which featured reunions for eight classes, including those celebrating their 50th reunion (Class of 1969) and 25th reunion (Class of 1994). It also included the spring induction by W&L’s Alpha Circle of Omicron Delta Kappa, the national leadership honor society, of seven new undergraduate members, and the recognition of five honorary initiates.

Farrar described his perspective on W&L’s evolution during his years on campus, from his childhood as the son of an administrator to today as an administrator himself. “W&L understands permanence and change,” he said. “It understands the importance of being faithful to old ideals while being open to the new. It is an institution confident in its character and purpose.” 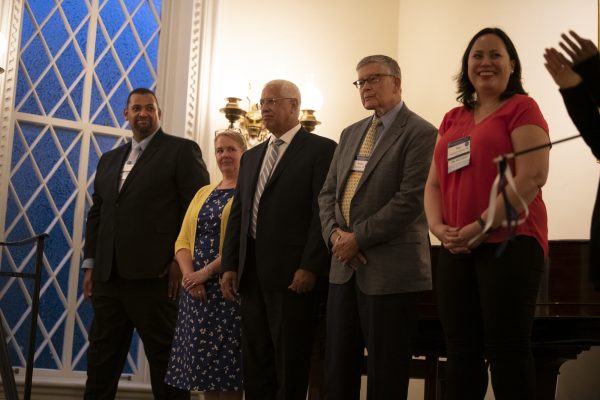 The ODK inductions were held prior to Farrar’s keynote. The honorary initiates were:

Maurice Cole ’94 earned his B.A. in sociology and anthropology at W&L. As a student, he held leadership positions in the Minority Student Association (now SABU) and served on the Student Recruitment Committee, Fancy Dress Committee and Independent Student Union. He co-hosted a radio show, “Midnight Love,” on WLUR-FM. After graduation, Cole returned to southern Ohio, where he joined a management training program at Fifth Third Bank. Upon realizing that banking would not be his forever industry, Cole left to forge a career in social service and public health. He worked for five years as a caseworker at Lighthouse Youth Services in Cincinnati, Ohio, specializing in the treatment and rehabilitation of adolescent sexual offenders. In 2000, he relocated to Cleveland, where he joined the Department of Epidemiology and Biostatistics at Case Western Reserve University. Cole’s public health training there positioned him to transition to the Cuyahoga County Board of Health, where he is a sexual health educator working with prevention programs aimed at youth ages 11-19 in a five-county area. His love of tennis, fostered at W&L, culminated in his participation in Gay Games 9, an international sporting event featuring 10,000 athletes from more than 60 countries. Cole serves on the advisory board of the Northeast Ohio Alumni Chapter and served as a member of the Class of ’94 reunion committee.

Jenny Elmes ’91 prides herself on both her community outreach and her mentoring of women within the community. Elmes, a Lexington native, was in one of the early classes of women to enter W&L. She majored in English literature and minored in creative writing, philosophy and art history. Elmes was the first woman to win the Mahone Sophomore English Writing Award. While at W&L, Elmes and friends started Live Drive, the predecessor to the Traveller safe ride program. After a three-year stint in Boulder, Colorado, where she volunteered for the Rape Crisis Team, she returned to Lexington to raise her family and start Full Circle Catering, a green business that bases itself on four tenets: deliciously prepared, sustainable and locally sourced food created on an environmental, ethical and altruistic basis. She has served on the board of the Lexington Rockbridge Chamber of Commerce, as a volunteer for Lime Kiln Arts, the Health Food Co-op board and as a Project Horizon board member, among other volunteer work. She currently serves as a board member for Meals for Shut-ins and is the chair and director for the second annual Women in Leadership event with the Chamber of Commerce. Full Circle Catering is the winner — for the second straight year — of the Greenest Caterer in Virginia Award from the Virginia Green Travel Alliance and was named for two years as a Top Green Provider by Food Logistics magazine.

Randolph Hare is the executive director of university facilities at Washington and Lee. He served as assistant, associate and director of maintenance and operations at W&L before assuming his current executive role. A leader in his field nationally, he has served on the board of the Association of Physical Plant Administrators, including a term as president in 2014-15. He is also certified in HVAC mechanical systems and is a member of the Professional Construction Estimators Association and Association for Facilities Engineering. In Lexington, he serves on the Work Culture and Compensation sub-committee for Strategic Planning for Kendal Retirement Community. He has also served on the planning and organizing regional committee for disaster relief activities.

Mai Spurlock Sykes ’94 After earning a bachelor’s degree in business administration from W&L, Sykes received a master’s in ancient history from the University of St. Andrews. She works in film and has made multiple award-winning short films with her sister Kim, including the Student Academy award-winning “Down in Number 5,” a Southern Gothic tale of a coal miner pushed to his limits for the love of his son. They also have a web series titled “Livin’ the Dream” currently streaming on www.seedandspark.com. It is a comedic take on the lengths a Brooklyn filmmaker will go to get her first feature film made. Sykes lives in the New York City area. 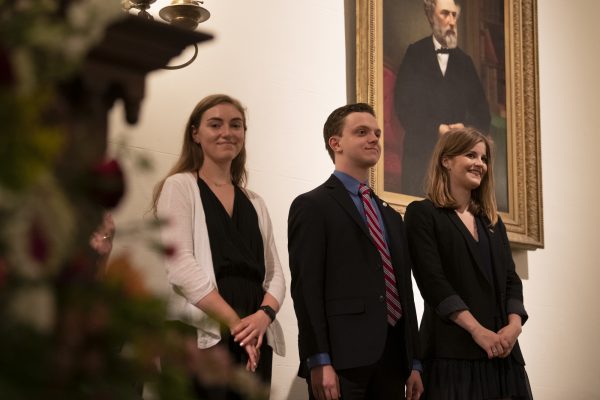 ODK presented the Rupert Latture Award, which recognizes a sophomore who has demonstrated outstanding leadership potential, to Sawera Khan, a global politics major from Atlantic City, New Jersey. Khan is on the pre-med track, with minors in Poverty and Human Capability Studies and Middle East and South Asia Studies.