W&L’s Leyburn Library Hosts Producer Talk Featuring Kevin Finch Finch will give a public talk on March 20 at 4:30 p.m. on the main floor of Leyburn Library on the W&L campus. 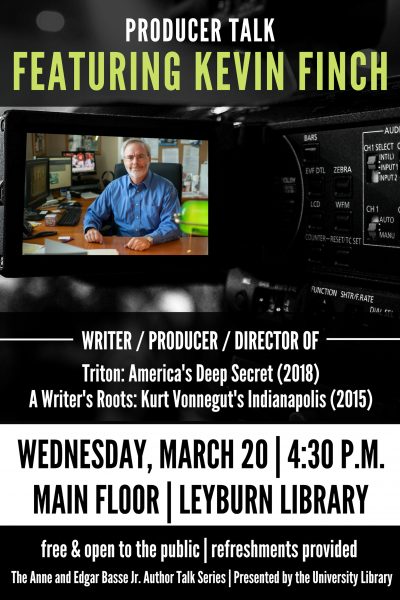 Kevin Finch, assistant professor of journalism and mass communications at Washington and Lee University, will give a public talk on March 20 at 4:30 p.m. on the main floor of Leyburn Library on the W&L campus. The lecture is free and open to the public, and refreshments will be provided.

During his talk, Finch will discuss his two documentaries, “Triton: America’s Deep Secret” and “A Writer’s Roots: Kurt Vonnegut’s Indianapolis,” which he wrote, produced and directed himself.

Finch has covered some of the most noteworthy stories of our lifetime, managed TV newsrooms and wrote and produced network documentaries before turning to teach full-time. He was in Washington, D.C. on 9/11 and covered the first anniversary of the attacks in New York. Finch also covered the Senate vote following President Clinton’s impeachment, a presidential inauguration, several political conventions and the bombing of Centennial Olympic Park during the Atlanta Olympics.

He was news director for two large market television stations, supervising staffs of up to 80 fulltime journalists. He wrote and produced documentaries for Discovery, TLC and other networks and local stations. Finch also served as founding president of the Indiana Debate Commission, the first such organization to organize and produce televised debates for statewide offices. Finch has taught journalism and broadcasting as an adjunct instructor at the University of Indianapolis and Indiana University-Purdue University Indianapolis.

The talk is sponsored by the library’s Anne and Edgar Basse Jr. Endowment. This fund was created in 1988 to support the varied activities of the university’s special collections and archives.

“The Anne and Edgar Basse Jr. Author Talk Series showcases the creative and scholarly works produced by members of the W&L community,” said Emily Cook, the instructional design specialist in Leyburn Library. “During each talk, a W&L author, or in this case producer, speaks about a recently published work and fields audience questions.”