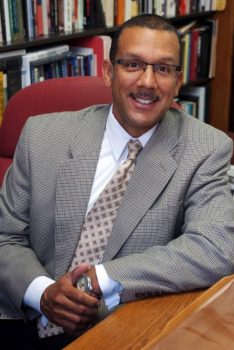 On the podcast, entitled “Shakespeare and the Making of America,” Morel participated in a panel facilitated by National Constitution Center President and CEO Jeffrey Rosen for a look at how William Shakespeare has shaped the country and how his work relates to American constitutional values today.

America’s early leaders, such as Ben Franklin, George Washington and Abraham Lincoln, as well as many Americans, read and revere Shakespeare. The podcast explores how echoes of Shakespeare can be heard in some of the most fundamental documents in American history, including the U.S. Constitution and the Declaration of Independence, as well as how Shakespearean themes have resonated throughout some of America’s biggest crises, from the American Civil War to the COVID-19 virus.

Listen to the full podcast here.