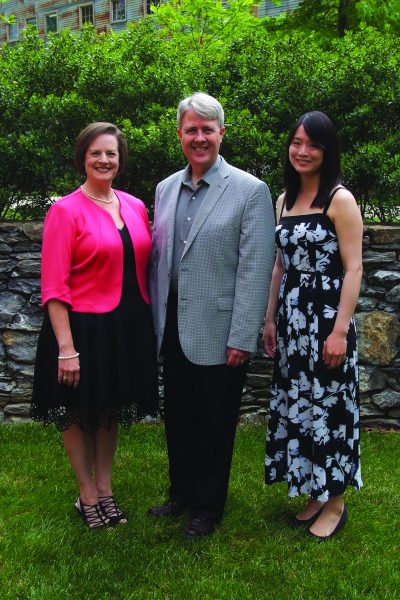 Faculty and students from Washington and Lee University’s department of music will present a recital entitled “An Eclectic Potpourri” on Oct. 1 at 3 p.m. in Wilson Concert Hall. Admission to the recital is free and it is open to the public. The doors will open at 2:30 p.m.

The program will begin with “Tircis et Climène,” a duet cantata by Michel Pignolet de Montéclair. W&L’s Gregory Parker, baritone, and Lori Parker, soprano, will appear in the title roles and will be joined by Ting-Ting Yen at the department’s recently refurbished Watson harpsichord, as well as Maggie Ma ’18 and Emma Rabuse ’20 on violin and cello, respectively.

The second piece, also French, is nearly 150 years younger than Montèclair’s cantata. Gabriel Fauré’s “Violin Sonata No. 1 in A Major, Op. 13” was premiered by violinist Marie Tayau in 1877 and will be performed on this occasion by W&L lecturer in music, Jaime McArdle with Yen accompanying on the piano.

The final selection, David Conte’s “American Death Ballads,” is a set of four songs to be performed by Parker with Yen on the piano. The set won the 2016 National Association of Teachers of Singing art song competition and was premiered at the NATS National Conference in Chicago.

“Even though the texts deal with death, they are charged with wide-ranging emotions. As soon as that premiere ended, I went straight to the Exhibit Hall and bought the score,” said Parker.