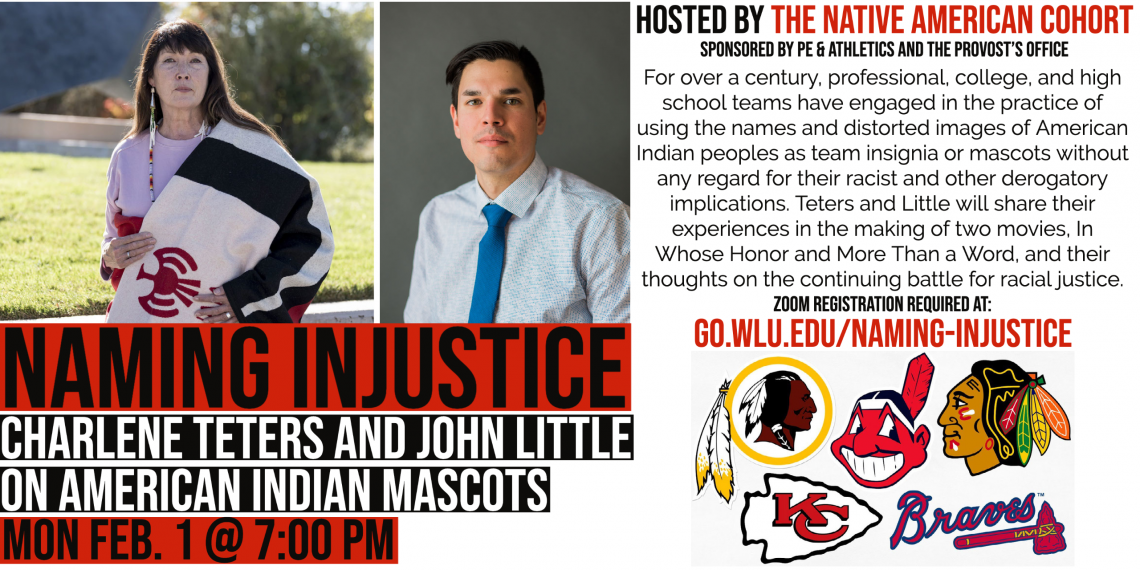 The virtual panel, which is free and open to the public online, is titled “Naming Injustice: Charlene Teters (Spokane) and John Little (Standing Rock Sioux) on American Indian Mascots.”

For more than a century, professional, college and high school teams have engaged in using the names and distorted images of American Indian peoples as team insignia or mascots without any regard for the implications behind the names. Teters and Little will examine the consequences and history behind those titles, as well as their thoughts on the continuing battle for racial justice. W&L NAC members Harvey Markowitz, professor of anthropology, and Joseph Guse, professor of economics, will lead the panel discussion.

The virtual panel, which is free and open to the public online, is titled “Naming Injustice: Charlene Teters (Spokane) and John Little (Standing Rock Sioux) on American Indian Mascots.” Registration is required and can be accessed at go.wlu.edu/naming-injustice.

Teters was the focus of a 1997 documentary, “In Whose Honor,” which presents a portrait of the use and abuse of deeply significant cultural symbols by those who place no other value in them than as an opportunity for entertainment and merchandising. She is an artist, lecturer and activist for Native rights. She earned an associate’s degree from The Institute of American Indian Arts and a bachelor’s degree from The College of Santa Fe. Teters earned her master’s degree from the University of Illinois and an honorary doctorate from Mitchell College in New London, Connecticut.

Little received his doctorate in history from the University of Minnesota, where his dissertation focused on Native American Vietnam veterans. As the director at the Indian University of North America, his program helps Native students succeed in higher education. Little brings the story of racism and American Indian mascots up to date with his new documentary, “More Than a Word.” The movie examines the history of the word “redskin” and its longtime use as the mascot for the NFL’s Washington franchise.

The NAC encourages W&L community members to watch both movies free of charge on Kanopy in advance of the panel. View “In Whose Honor” here and “More Than a Word” here.

The event is sponsored by W&L Athletics and the Office of the Provost.