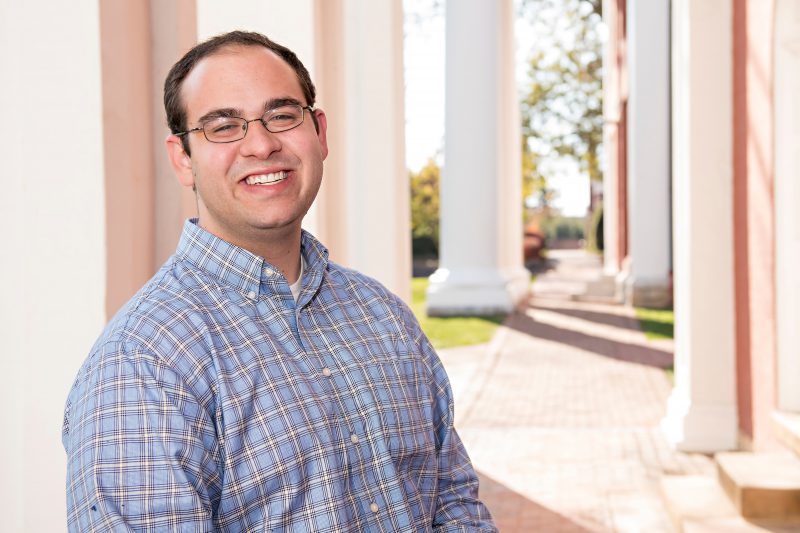 The Rhodes Trust announced Sunday that Toscano, 22, of Kettering, Ohio, was one of 32 scholars chosen this year. The scholarships, valued at between $50,000 to $200,000, fully fund two to four years of study at the University of Oxford in England.

The summer following Toscano’s first year at Washington and Lee, he suffered a spinal-cord injury in an accident. Forced to take a semester-long leave of absence to learn to walk again, Toscano, who had originally considered a career in law, found that literature provided refuge during his lengthy recovery. An independent study during his absence from campus provided perspective for his changed circumstances.

“We read Donne and Herbert, as well as Herrick, whose exhortation to ‘make much of time’ galvanized me to construe my rehabilitation as an epistemologically-enriching experience —which informed my understanding of human vulnerability and perseverance — rather than a defeating one,” said Toscano. “But it was not until I read the blind John Milton’s verse that I discovered a voice whose reflections on sightlessness struck both an intellectual and visceral chord. The poet’s work highlighted that studying Renaissance literature affords me opportunities to make contributions to disability studies.”

Genelle Gertz, professor of English at W&L, directed Toscano’s independent study while he was away from campus. “I didn’t know at the time what future Paqui would face regarding his health, or whether he would be able to return,” said Gertz, “but I felt privileged to teach a brilliant student who was fighting to recover. I am thrilled, and extremely proud, that he’s now going on to specialize in the area he studied independently with me.” Reflecting on Toscano’s resolve, Gertz said, “His response to the accident has, more than any another thing, proven his immense determination and courage in the face of hardship. We’re all lucky Paqui returned to W&L; he took the campus by storm.”

Kevin Crotty, professor of Classics, said of Toscano, “I was singularly impressed by the excellence of his Latin, and his painstaking interest in attaining as thorough an understanding of Latin as possible. Not many students lavish such loving and intelligent care on a text; even fewer do so, I imagine, when they are fighting their way back from possible paralysis and undergoing a trying course of physical rehabilitation. It is a mark of his intellectual maturity that he could already, as quite a young person, find solace and encouragement in his studies.”

Members of Toscano’s “village” ­ — which includes faculty and administrators at Washington and Lee —  are not at all surprised by his accomplishment.

“Paqui will succeed as a college professor or at absolutely anything he decides to do,” said Ken Ruscio, president of Washington and Lee. “He has intelligence, character, diligence and a conspicuous cheerfulness that make him a very rare individual. Everyone on our campus — students, faculty and administrators — knows Paqui, admires him and counts him as a friend. There is a rare sincerity, enthusiasm and uniformity in our judgment of this remarkable young man.”

“Paqui combines extraordinary talent, intellect and spirit,” said Lesley Wheeler, Henry S. Fox Professor of English. “I like and admire him profoundly and believe he will make powerfully positive contributions to any community he joins.”

Rebecca Benefiel, associate professor of Classics and Toscano’s adviser in that major, describes him as “a truly remarkable individual who has overcome the odds multiple times and who will be a brilliant and inspiring professor.”

“Paqui is a dedicated, intellectual student,” said Benefiel, “a true discussion leader, a big thinker and an inspired writer whose words fly off of the page.”

Toscano graduated from Fairmont High School in Kettering, Ohio. At Washington and Lee, he received the Edward L. Pinney Prize, the G. Holbrook Barber Scholarship Award and the Matthew J. Mason Latin Prize. He also won the Elizabeth B. Garrett Scholarship in English, the Dabney Stuart Prize in English and the Sidney Coulling Prize in English. He is a member of Phi Beta Kappa, Omicron Delta Kappa, Phi Eta Sigma and Eta Sigma Phi classics honor society. The W&L faculty awarded him the Algernon Sydney Sullivan Medallion, which honors the senior man or woman who excels “in high ideals in living, in fine spiritual qualities, and in generous and unselfish service to others.”

Toscano was among 20 students awarded a Beinecke Scholarship for graduate study and was recently named a national leader of the year by Omicron Delta Kappa.