W&L’s Pinto-Bailey Publishes English Translation of Novel The novel “Ursula” is Brazil's first abolitionist novel and the first novel by an Afro-Brazilian woman. 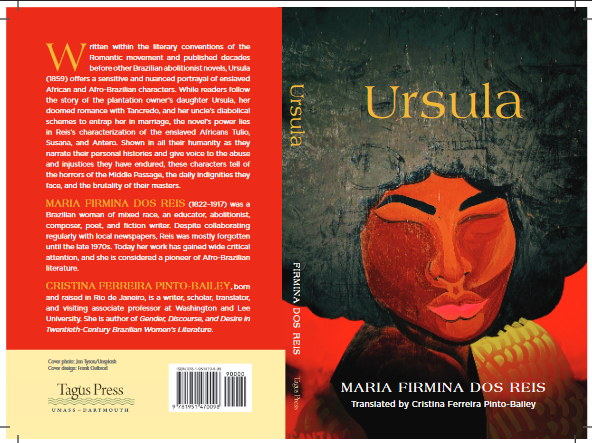 Cristina Pinto-Bailey, visiting associate professor of Spanish and Portuguese at Washington and Lee University, recently published an English-language translation of Brazil’s first abolitionist novel, “Ursula,” which was also the first novel by an Afro-Brazilian woman.

Written by Maria Firmina dos Reis, “Ursula” was first published in 1859. The work came out decades before other Brazilian abolitionist novels and offers an account of enslaved African and Afro-Brazilian characters. In the tale, readers follow the story of a plantation owner’s daughter, Ursula, her ill-fated romance and her uncle’s sinister plans to trap her in marriage.

The novel also fully characterizes the enslaved Africans Tulio, Susana and Antero. According to the book’s description, the characters are “Shown in all their humanity as they narrate their personal histories and give voice to the abuse and injustices they have endured. These characters tell of the horrors of the Middle Passage, the daily indignities they face, and the brutality of their masters.”

Maria Firmina dos Reis was known for her work as an educator, abolitionist, composer, poet and fiction writer. Reis was not well known outside of her home state of Maranhão, despite regularly collaborating with local newspapers. Upon her death, her name was mostly forgotten until the late 1970s. Today Reis’s work has reclaimed attention, and she is considered a pioneer of Afro-Brazilian literature.

Pinto-Bailey was born and raised in Rio de Janeiro. In her own writing, Pinto-Bailey addresses issues of gender and race in works by modern and contemporary Latin American women writers, with a particular interest in authors from Brazil and Argentina. She has published extensively in scholarly journals and has written creative works and translations of Brazilian literature into English.

“Ursula” will be available on Nov. 26. You can read more about the novel and preorder it online here.