“This center is here for the students as well as the community. We wanted to update the building so it could also be a more useable teaching space.”

Washington and Lee University’s Reeves Center this year will celebrate its 50th anniversary and its grand re-opening after six months of renovations.

There will be two open houses for the anniversary and re-opening of the center. The first will be Sept. 26 from 2-6 p.m., with the second taking place during Parents and Family Weekend, on Oct. 7 from 10 a.m.-4 p.m.

Visitors of the center will experience a newly renovated atrium that will house highlights from the collection. Renovations also include a new painting gallery that will display Louise Herreshoff’s work and double as a handicapped-accessible classroom.

Ron Fuchs, curator of ceramics and manager of the Reeves Center at W&L, hopes to see the collection used as a teaching tool across curricula.

“This center is here for the students as well as the community. We wanted to update the building so it could also be a more useable teaching space,” Fuchs said. “We even had students come in last year and just study for exams because it was quiet, and that’s fine with us.” 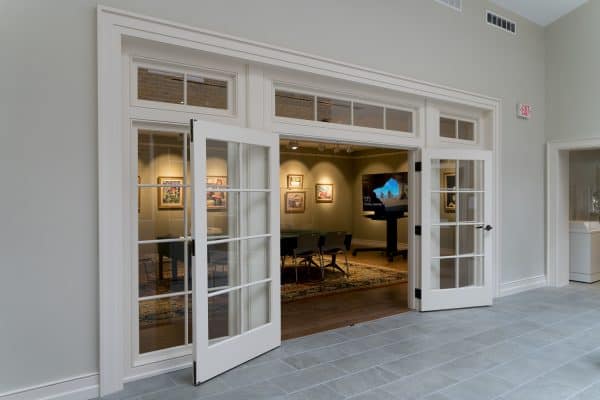 Other rooms in the Reeves Center received fresh coats of paint, updated lighting and new wall-mounted mahogany casing that will house various pieces of the collection, including Chinese porcelain export, Japanese porcelain, armorial porcelain (coat of arms), and British and continental European ceramics.

The Reeves Center is located in an 1842 house on the campus. Today, thanks to gifts and bequests, the Reeves collection is one of the most extensive in the United States.

The Watson Pavilion, behind the Reeves Center, houses the Senshin’an Japanese Tea Room, by Sen Genshitsu, 15th-generation grand master of the Urasenke tradition of tea.

The Reeves Center and Watson Pavilion are open Mon. – Sat., 9 a.m. – 4 p.m. Renovations to the center, including the Elisabeth S. Gottwald Gallery, were made possible by donations from the Herndon Foundation, members of the family of Elisabeth S. Gottwald, and John Goadby Hamilton ’32.