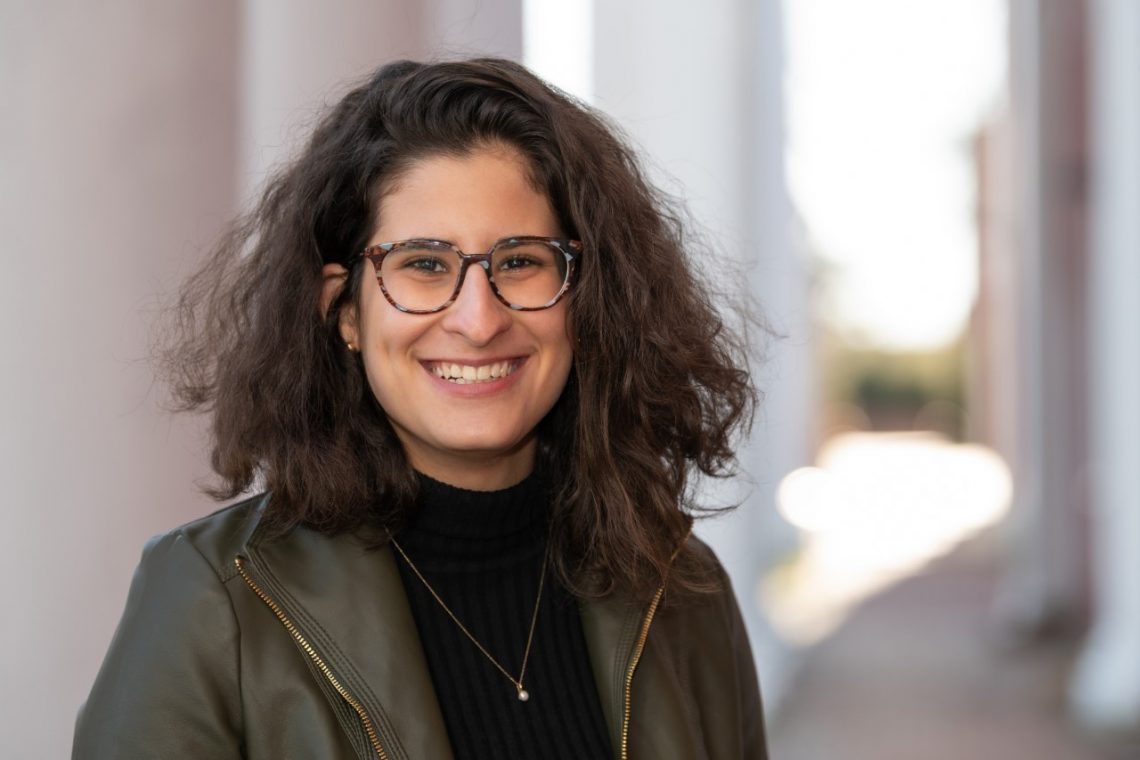 “Rossella has noticed that the law governing human activity in space is as nascent as the ethical questions that surround it. She has further realized that her interests and experience position her well for what would be – for what I believe will be – an unusual, extraordinary, meaningful, and impactful career.” Seth Cantey, assistant professor of politics

The Rhodes Trust announced Sunday that Gabriele, 22, of St. Louis, Missouri, was one of 32 scholars chosen this year. The scholarship, which averages $70,000 per year, and up to as much as $250,000, fully funds two to four years of study at the University of Oxford in England.

At W&L, Gabriele was devoted to finding equilibrium at the intersection of physics and global politics. Her junior year, working with her advisor, W&L Professor of Physics Irina Mazilu, Gabriele conducted independent research leading to a proof-of-concept model for predicting U.S. Senate votes using a partisan ranking tool combined with the Ising Model for ferromagnetism from physics.

As a policy intern for the Senate Committee on Homeland Security and Governmental Affairs, she created a database of Immigration and Customs Enforcement (ICE)-targeted courthouses, hospitals, churches and schools. Her efforts resulted in the Minority office’s formal oversight letter to ICE demanding accountability for illegal and inhumane raids.

After graduating from W&L, Gabriele worked with the U.S. Department of State TechGirls program as a cultural ambassador and STEM mentor for girls interested in science from Middle Eastern, North African and Central Asian nations, empowering them to return to their nations as change-makers in their chosen fields.

“In each of these experiences,” said Gabriele, “I sought opportunities to leverage my scientific background and analytical mind to advance the work of humanist policies and human rights advocacy.”

“At the core of Rossella’s beliefs is the idea of giving back to the community,” said Mazilu. “She lives her life with purpose and urgency and doesn’t waste time. She takes nothing for granted and came back from her academic and social experiences abroad with a renewed sense of gratitude for the support of the Washington and Lee academic community and a responsibility to share with her peers what she learned.”

In 2017, Gabriele held an internship in the Office of U.S. Senator Mark Warner. The following summer, she worked as a nuclear astrophysics research intern at the Italian National Institute for Nuclear Physics, where she modeled and graphed results from experiments using the Trojan Horse Method of extracting two-body collision cross-sections from a three-body reaction.

“Exceedingly few students intern for U.S. Senators one year and renowned nuclear astrophysicists the next,” said Seth Cantey, assistant professor of politics at Washington and Lee. “But somehow it doesn’t surprise me that Rossella has done that. For as long as I’ve known her, I’ve wondered how she would pair her love for science and her drive to advance the cause of human rights in a career after W&L. Rossella has noticed that the law governing human activity in space is as nascent as the ethical questions that surround it. She has further realized that her interests and experience position her well for what would be – for what I believe will be – an unusual, extraordinary, meaningful, and impactful career. It will be one at the intersection of law and science, social advocacy and space.”

“Taken all together, Rosella’s coursework, research, teaching, and outreach would make a very strong resume for a student intent on becoming a professional scientist,” said David Sukow, Robert Lee Telford Professor of Physics at Washington and Lee. “In Rossella’s case, however, it is only part of a much more extensive background. Her accomplishments in physics become all the more impressive when one realizes that she has an equal or greater record of activity and accomplishment in the fields of politics and human rights. On one level, I simply marvel that she had the energy to co-found a chapter of Amnesty International on campus and raise thousands of dollars, while completing extensive problems sets in physics. It’s rare indeed to find a student with such innate talent in different academic domains, but also to find one so tireless as to be a standout in both fields while also making incredible positive impacts on the campus community.”

Gabriele’s potential and drive for creating positive change in the world did not go unnoticed during her time at Washington and Lee.

“What draws Rossella to space and the study of space law are the ethical and humanitarian issues that will inevitably arise with the proliferation of space‐related enterprises and the development of new space technologies in the future,” said Washington and Lee President William C. Dudley. “Ask her what questions drive her, and she’ll provide you with a multitude, each more trenchant than the last, that speak to both the sophistication of her thought and the depth of her commitment to the cause of humanity.”

Gabriele graduated from St. Joseph’s Academy in St. Louis. In addition to being awarded W&L’s Johnson Scholarship, she received the Physics and Engineering First-Year Award and Scholarship. She was awarded the Christopher Noland Student Activities Leadership Award and was named Student Leader of the Year in 2018, and received the 2019 American Academy of Poets Poetry Prize. She was elected president of the Alpha Circle of Omicron Delta Kappa and is a member of Phi Beta Kappa and Phi Eta Sigma Physics Honor Society.

In addition to serving as the chapter co-founder and president of Amnesty International at Washington and Lee, Gabriele also served as a residential advisor, vice president of the College Democrats, outreach chair of the Alexander Hamilton Society, editor of the Political Review, committee member of the First-Generation and Low-Income Partnership, a peer tutor, and the physics chair of Women in Science.

Upon learning of her Rhodes Scholarship, Gabriele expressed appreciation for her network of support at W&L. “I’m so thankful for my professors, mentors and fellowship advisors, as well as my incredible friends and family, who provided guidance and encouragement throughout my undergraduate years.”