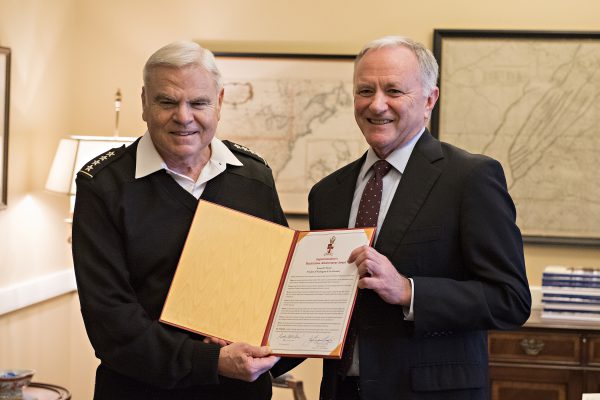 The Award recognizes extraordinary service and dedication to the Institute over many years by an individual who is not a VMI employee.

“I am deeply appreciative of this recognition by VMI,” said Ruscio. “I want to assure them that the respect is mutual. Kim and I have been fortunate to have enjoyed the friendship and support of colleagues at VMI, especially Gen. Peay and his wife, Pamela.”

The citation lists a number of Ruscio’s accomplishments during his tenure at Washington and Lee. These include the establishment of several new academic initiatives, including the Roger Mudd Center for Ethics, the J. Lawrence Connolly Center for Entrepreneurship, and the development of the highly regarded Johnson Program in Leadership and Integrity; the significant expansion of the university’s financial aid program; and the modernization and construction initiatives that led to the renovation and restoration of the historic Colonnade, the building of the Hillel House, The Village third-year student housing, and the recently named Ruscio Center for Global Learning.

The award also recognized Ruscio for his support of the communities of Lexington and Rockbridge County through the creation of W&L’s Community Grants program.

Related //The College, The Williams School