“I would encourage angry observers to look to another American tradition that transcends and predates our politics: Thanksgiving.”

The following opinion piece by Mark Rush, Waxberg Professor of Politics and Law and director of international education at Washington and Lee, appeared in the The Roanoke Times on November 24, 2016, and is reprinted here by permission. 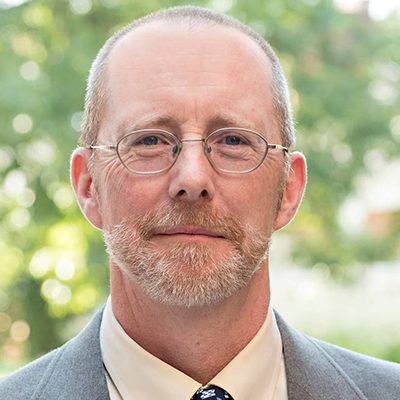 I served as dean of a college in the Middle East for three years. It was impressive to see and hear the United States discussed so frequently in critical terms by denizens of a part of the world in which anti-western sentiment is common.

Questions about the USA frequently focused on our politics. Over there, it didn’t matter if the president were a Democrat or a Republican. American military presence in the region had endured under both parties and the wars in Iraq and Afghanistan bore the imprimatur of Democrats and Republicans. From this perspective, it was never difficult for an observer to identify the contradictions in our political rhetoric, to find reason to cast aspersions on the performance of our political system or, simply, to be angry with the United States.

This same sort of visceral anger has rendered this election year perhaps the most regrettable, divisive, dangerous, ominous… (the list of adjectives goes on) in our history. The tenor of presidential debates was debased as the candidates spent as much time trading insults as they did addressing the pressing economic problems and growing economic inequality that generate fear and anger among voters of all races and walks of life.

In retrospect, it is horrifying to see that our political system is now as adept at generating anti-Americanism at home as it has been abroad.

It was, at first, a great challenge to try to explain the beauty of the USA to people whose views of our politics and culture are shaped by the same media that has taken sides in this election. As long as an observer focused on our contemporary politics, it was difficult to convince him or her to look further or more deeply.

As an antidote to this outlook (or perhaps, as a distraction), I would encourage angry observers to look to another American tradition that transcends and predates our politics: Thanksgiving. No, not Christmas or the 4th of July…no presents, fireworks, flag waving or gifts that had to be returned. Instead, I encouraged folks to look at the holiday on which Americans put aside politics, join hands in thanks and share a meal that symbolizes the celebration of the harvest.

This is, I would argue, American culture at its best. It was not an exaggeration, I would tell them, that even mortal enemies’ hearts would soften if they knew that someone was spending Thanksgiving alone. Better to share a meal and fall asleep watching football than to expend energy on divisive politics. Life is better if enemies pause occasionally to find common ground (and acknowledge that it exists). It was amazing and heartwarming to see that even the most visceral critics of our politics would soften at the thought of our Thanksgiving tradition.

It is serendipitous that Thanksgiving comes just a couple of weeks after Election Day. This year, more than ever, the country needs to rediscover its common ground in the wake of an election that has exposed and rubbed salt in virtually every political wound imaginable. Despite occasional acknowledgments of accord (Kaine and Pence agreed that our communities and police need to heal wounds and work together) and respect (by God, Donald Trump is a good father and Hillary Clinton is a tenacious fighter) our presidential candidates have done little to suggest that the country can move forward together to solve the economic problems that divide it.

Despite the damage done to the electorate by the septic rhetoric of the presidential campaign and the fallout of the election, Thanksgiving looms once again as a chance to demonstrate to ourselves that there is more that unites the nation than divides it. In ancient Greece, city-states would pause wars and put down their weapons to celebrate the Olympics. Maybe the country can put this election behind us in a spirit of Thanksgiving … Amen.