W&L’s WLUR, Journalism Department to Observe Radio Milestone The event on Oct. 28 will celebrate the 100th anniversary of commercial radio in the United States. 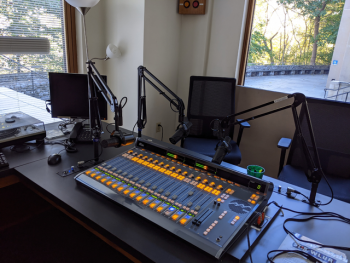 WLUR 91.5 FM and Washington and Lee University’s Department of Journalism and Mass Communications will co-host a panel discussion at 7 p.m. on Oct. 28 to mark the 100th anniversary of commercial radio in the United States.

The panel, which will take place virtually, is open to the public. Registration is free and can be accessed here.  The event will also be broadcasted on WLUR, including through the station website at go.wlu.edu/wlur.

The panel will celebrate the centennial anniversary of the first commercial radio broadcast in the country, which took place on Pittsburgh station KDKA on Nov. 2, 1920. WLUR launched its broadcast signal in 1967.

De Maria retired from W&L in 2013 after teaching broadcast journalism for 35 years. He served as WLUR station manager from 1977 until 2001, when the radio station moved into the university’s Office of Communications and Public Affairs.

Wiechmann is a senior producer and “All Things Considered” host for Indiana Public Radio, headquartered in Muncie, Ind. Since 2007, the Minooka, Ill. native has reported award-winning stories from more than a dozen counties in east central Indiana. She also serves as the editor for IPR’s student news reporters.

Oliger is technology manager at WTOP-FM, the top-rated all-news radio station in Washington, D.C., overseeing all broadcast and information technology systems. He has also worked in radio in Philadelphia and in his hometown of Cleveland, Ohio. He is a winner of the Achievement in Radio (AIR) Award and is a member of the Society of Broadcast Engineers and the National Press Club.