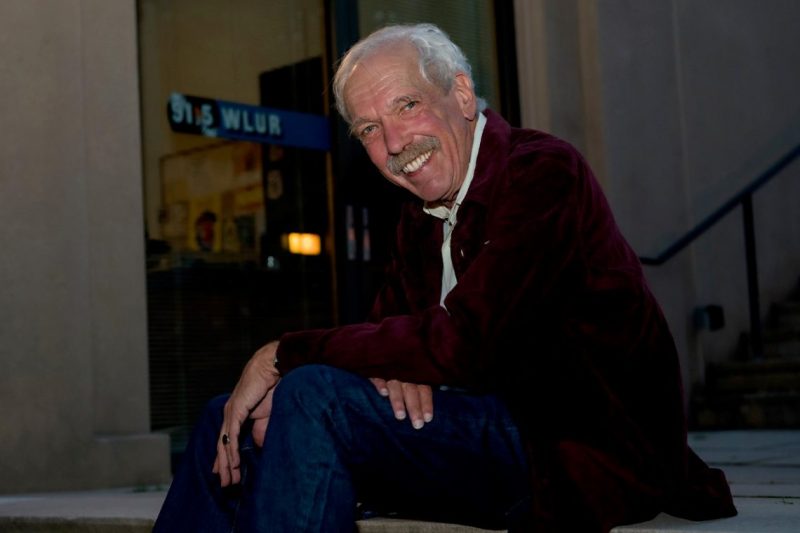 “It’s an amazing thing, the way radio can carry you away.”

In the early 1970s, you could witness Washington and Lee student Doug Harwood toting bundles of LPs into the WLUR studio in Reid Hall on Saturday nights for his radio show, “The Anti-Headache Machine.”

The studio has moved a couple of times, including into its current home in the John W. Elrod University Commons. CDs were eventually added to the mix of media (though vinyl remains). The specific artists, genres and eras featured on the show – culled entirely from Harwood’s extensive personal collection – have continually expanded. But otherwise, not too much has changed as the program celebrates its 50th anniversary this month.

Harwood, a member of the Class of 1974, has hosted his music-centered program from 8 p.m.-midnight on most Saturdays over the past five decades. The longevity of “The Anti-Headache Machine” – Harwood estimates that he’s produced between 2,400 and 2,500 editions of the show – is surpassed by very few other programs on college or commercial radio in the United States.

Tune in and you’ll rarely hear Harwood himself. Outside of a brief intro at 8 p.m. and a similarly short sign-off when midnight rolls around, his only voiceover work is to provide the legal station identification at the top of each hour.

Every Saturday evening, listeners are treated to a bevy of audio treasures, ranging from traditional Americana to Ethiopian jazz, from blues rock to avant-garde compositions, from left-field folk to bossa nova – and with snippets of classic radio theater sprinkled in for good measure.

It’s a formula that, in theory, shouldn’t really work, and yet there’s a splendid method to the madness.

Hugh Sisson ’76 recalls the early years of “The Anti-Headache Machine,” when the show’s modus operandi was being established.

“[I remember] Doug putting together a very large stack of very eclectic records every week as he went into the studio,” Sisson said. “As he was on the air, he took great pleasure in trying to find just the right next piece, so that the show seemed to just flow.” 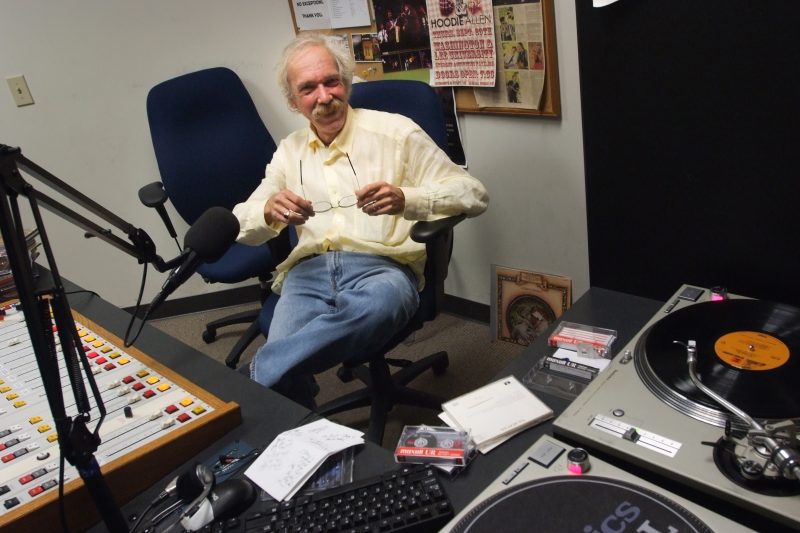 Doug Harwood ’74 on the 40th anniversary of his radio show, “The Anti-Headache Machine.”

Harwood has always hosted his WLUR show on a volunteer basis. His professional career has kept him in the Rockbridge County area, including commercial radio news and sales gigs with WREL in Lexington and the now-defunct WAYB in Waynesboro.

Since 1992, Harwood has served as editor-in-chief of The Rockbridge Advocate, the monthly newspaper that he founded. He was inducted into the Virginia Communications Hall of Fame in 2013.

But “The Anti-Headache Machine” has allowed Harwood to pursue his passion. This fascination with radio started during his childhood in Massachusetts, when he recalls listening to, among other things, local farm reports on a tabletop receiver.

“It’s an amazing thing, the way radio can carry you away,” Harwood said. “While it’s a mass medium, it’s also an individual and personal one. It doesn’t speak to all of us; it speaks to each of us. That’s the truly magical thing about radio.”

Fans of “The Anti-Headache Machine” would wholeheartedly echo that sentiment.

“What most sets Doug’s program apart is his gift for weaving together disparate musical threads, conjuring an eclectic continuity possessed of its own solid logic, connecting dots no one else would, constructing an eccentrically beautiful tapestry which rewards those who pay attention,” said Patrick Hinely ’73, who’s also been involved with WLUR since his undergraduate days.

On occasion, Harwood’s tenure on WLUR has been interrupted by circumstances beyond his control. The station’s relocation during the 2001-02 academic year temporarily shut down the FM signal; meanwhile, limits on campus access during the COVID-19 pandemic put “The Anti-Headache Machine” on the shelf for about 15 months. Once the university was able to relax some of its restrictions, Harwood returned to the studio in June.

The outpouring of support that came in during the show’s recent hiatus proved that many people in Lexington (and, thanks to the WLUR web stream, well beyond the reach of the FM transmitter) care deeply about the program. That support reinforced Harwood’s commitment to keep going.

“Some of the notes I get are pretty darn moving,” he said. “I’ve heard enough good things from people over the years to keep doing it.”

So if you’re anywhere near Elrod Commons on a Saturday evening, keep an eye out for a man toting a batch of records and CDs into the WLUR studio. Or, better yet, find a radio and tune in.

“The Anti-Headache Machine” celebrated its 50th anniversary on Oct. 9. The show airs Saturdays from 8 p.m.-midnight on WLUR. Listen on 91.5 FM in Lexington or online at my.wlu.edu/wlur.