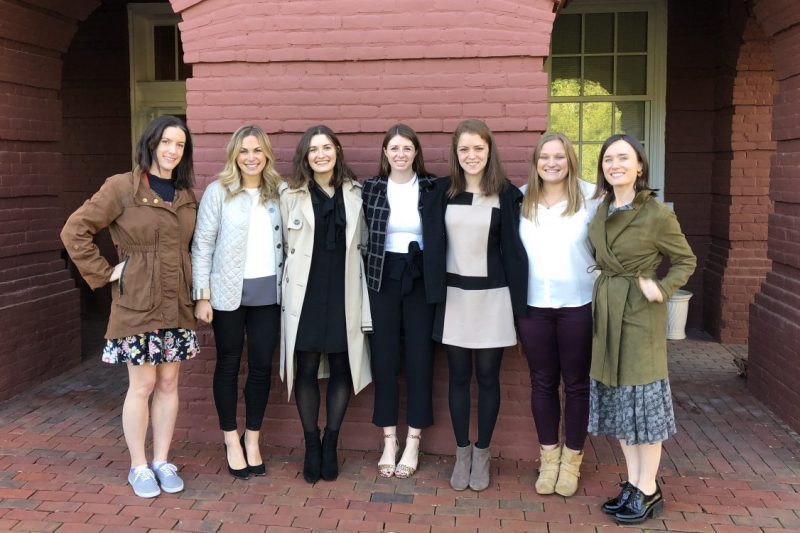 “We wish we had more people our own age to give us advice about the real world.”

That’s what Alecia Swasy, Reynolds Professor of Business Journalism, heard from recent graduates. With that in mind, she invited seven alumnae who cover the financial markets to offer advice — both professional and personal — and provide networking opportunities for students interested in pursuing a career in business journalism.

“Covering Corporate America and Wall Street is an exciting beat and W&L’s graduates are working at the very best international news outlets,” Swasy said. “Who better than seven of our alums to show students about such exciting careers?”

Making the journey to Lexington were Mary Childs ’08 and Alexandra Scaggs ’09, who have close to a decade each under their belts, and recent grads Leslie Yevak ’17, Anna Akins ’17, Rachel Adams-Heard ’16, Polina Noskova ’17 and Rachel Stone ’17.

Representing Barron’s, Bloomberg, CNBC and S&P Global, the alumnae spent Oct. 19 in Swasy’s Covering Business class, at a panel discussion open to all students and at a networking session hosted by the Office of Career and Professional Development.

In Swasy’s class, which included business journalism, strategic communications and business majors, the group offered insights on how to land that first job and advance through the ranks. Many of the suggestions were tried-and-true chestnuts: “Don’t be afraid to ask questions,” “Always volunteer to take on something outside your comfort zone,” “If you want that assignment, keep asking for it” and “Find a mentor.”

The group emphasized the importance of being open to new opportunities and not being defined or limited by a job title or description. As Stone noted: “Your first job is probably not going to be your career. If a better opportunity comes your way, take it. View your current job as a stepping stone.” Childs added, don’t let an employer slot you into a box. “When your job isn’t serving you any longer, get out. If you’re genuinely curious and have proven yourself to be competent, you’ll be able to move up, either at your current job or somewhere else.”

They also stressed that their experiences on the Ring-tum Phi and Rockbridge Report, as well as their summer internships, served them well in promoting themselves. Yevak, a journalism major, parlayed her ability to cut packages for the Rockbridge Report into a position with CNBC. “Having some producing experience was definitely an advantage in landing this position at CNBC,” she said. “I’m learning every day because I don’t have an economics or business background.

“It’s hard not to tell you not to be scared,” Yevak added. “But think of your first job as being surrounded by experienced people. Take advantage of having all those intelligent people around you.” Akins recommended being honest. “Let people know you’re right out of college and that you have questions.”

Several advised taking Beat Reporting — “There’s no substitute,” said Scaggs. Classes in ethics, economics (specifically Professor Linda Hooks’ course on Money and Banking) and accounting ranked high on the list. And there was the shout-out to taking as many liberal arts classes outside the major as possible. “I wished I had taken more,” said Scaggs. “They can be really useful in helping you look at the financial world from a different perspective.”

As the veteran journalists of the group, Scaggs and Childs wished they had pushed back a bit earlier in their careers, particularly when an editor was insisting on a story that either didn’t have legs or didn’t match the reporting. Adams-Heard provided an example: “You have to challenge editors when you feel like the story’s moving in a direction that isn’t fair to your sources or the people you interviewed. When I was writing a story on map camps in the oilfields in West Texas, I tried to be very careful about not relying on stereotypes and using only details and anecdotes that added value.” She emphasized that if you’re going to earn the community’s trust, then “you have to be accountable to the people you interview.” Childs agreed: “Be conscious that you are writing about humans. You can be fair and kind.”

With these women working in a male-dominated field, the classroom and panel discussions turned to sexual harassment and pay equity. The general consensus was that a thick skin is useful. “You’re going to be called sweetheart,” said one. “There will be lots of mansplaining,” added another. Salaries for some still lag behind those of their male counterparts, and they advised students to advocate for themselves early and often.

But there are signs of progress. Scaggs noted, “Five years ago, I didn’t see a lot of women in middle management. That was discouraging, but the change I’m seeing has been astonishing.” She mentioned that at least one of the places she’s worked has significantly expanded its maternity leave. Noskova cited an example of Bloomberg reporters including more women and minority sources in coverage.

Overall, the group is cautiously optimistic that the work environment is improving for women. They hope that by sharing their stories, the next generation of business reporters will be even better prepared than they were.

Anna Akins ’17 is a reporter for S&P Global in Charlottesville. She covers big tech firms, including Facebook, Google and Apple. At W&L, she interned for the Richmond Times-Dispatch and the Savannah Morning News.

Rachel Adams-Heard ’16 is an energy reporter at Bloomberg in its Houston office. She won first place for general news reporting-newspaper (small school division) in Region 2 of the 2014 Society of Professional Journalists college journalism competition.

Mary Childs ’08 is a senior reporter at Barron’s, where she writes about debt and alternative investing, among other things. She’s also working on a book about Pimco, Bill Gross and the bond market. She has worked for the Financial Times and Bloomberg.

Polina Noskova ’17 is a breaking news editor at Bloomberg, where she also interned as a student. She’s covered Tesla, Harvey Weinstein, cryptocurrencies and more.

Rachel Stone ’17 is a finance technology reporter for S&P Global in Charlottesville. As an intern for the Charlotte Observer, she interviewed the mother of Lorne Ahrens, one of five police officers shot and killed in Dallas on July 7. She also interned at The Roanoke Times. At W&L, she was the cops reporter for the Rockbridge Report.

Alexandra Scaggs ’09 is a senior reporter at Barron’s covering U.S. markets and investing, with a focus on fixed income. Previously, she worked at the Financial Times, Bloomberg and the Wall Street Journal. At W&L, she wrote about a former POW who lived down the road and a distant ancestor who adopted and raised a bear in rural Virginia.

Leslie Yevak ’17 is a planning producer at CNBC, where she has produced hits on such topics as the 2018 Winter Olympics, the Beijing Auto Show and CNBC’s “Trade War Tour” series. At W&L she was news editor of the Ring-tum Phi, a news producer for the Rockbridge Report and a summer intern at Fox News in New York.