Working for Unity and Change Ayo Ehindero ’21 and Julia Habiger ’21 created an initiative to bridge the gap between Greek life and minority students. 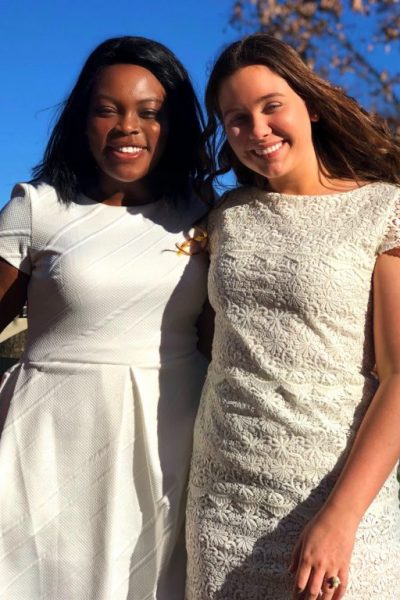 A year ago, when Ayo Ehindero ’21 visited campus as a prospective student for DIVE Weekend, she and other students of under-represented groups were advised by a professor to “make space for yourself” in college.

So when she came to W&L, she did just that.

Ehindero, of Fort Myers, Florida, the daughter of Nigerian-born parents, is now the leader and co-founder of an initiative to build bridges between diverse student organizations and Greek organizations.

The initiative designates members from each sorority and fraternity to serve as ODI representatives within their organizations to combat the racial, socioeconomic, and other invisible lines that often separate Greek and independent life at W&L.

Ehindero said that as she entered the W&L scene, she struggled to find a balance between exploring the prominent Greek community and building friendships with other students of color. She feared that choosing either side might be isolating. She still struggles to be a part of both communities after joining a sorority.

“It’s like I am on a tightrope in between these two worlds,” she said.

She’s not alone in that struggle. Julia Habiger, also a first-year, said the divide is “hard to watch.”

Habiger and Ehindero, work-study students for ODI, were sitting in on a monthly department meeting in January when their idea came to life. The meeting covered upcoming events and initiatives, encouraging the various administrators and student representatives from ODI campus organizations in attendance to support fellow groups.

The meeting was held just after sorority rush (they both joined Chi Omega) and the pair realized that they and only one other student in attendance were of Greek affiliation, so the meeting directors were just “preaching to the choir.” They wanted that to change.

Habiger realized W&L could implement a representative system similar to one she joined at her small, private school in Baltimore, which she described as having “the same issues as W&L.”

“Instead of ODI people talking to ODI people, we are going to try to make people in Greek life aware so they can attend,” she said. “[We want to] bridge the gap.”

The initiative is clearly working. Some Greek organizations have had so many members request involvement in the new program that Ehindero and Habiger have had the luxury of selecting from a large pool of applicants. Unity and change have clearly just begun.