“It’s a time to showcase the efforts and impact of our dedicated campus leaders, and to thank advisors and students alike for their commitment to student engagement, personal development and continued mentorship.” 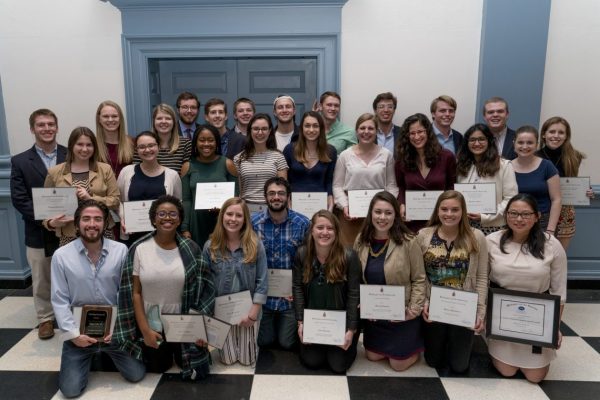 The Leadership Education and Development (LEAD) Banquet was held Sunday, March 18 at Washington and Lee University and was an evening of celebration. Many individual and student accomplishments that were completed within the past year were recognized.

“The LEAD Banquet continues to bring together members of our community in celebration of the meaningful work happening across campus,” said Megan Hobbs, associate dean of students and dean of sophomores.

“It’s a time to showcase the efforts and impact of our dedicated campus leaders, and to thank advisors and students alike for their commitment to student engagement, personal development and continued mentorship. The true spirit of the Washington and Lee experience lives within the influence of our student body and my hope is that the banquet continues to be a reminder that our campus is as vibrant and lively as it is because of the commitment our students have to strengthening the W&L experience.”

“This year’s Banquet Committee was led by Matthew Rickert ’18, who deserves all the credit for this year’s event,” continued Hobbs. “We had a young team and I was on leave in the fall; however, we still managed to host the largest LEAD Banquet to date. The students did not miss a beat in preparation or execution and they should be proud of their work!”

The LEAD Banquet awards and 2018 recipients are:

Recognizing a student who demonstrates a commitment to their community through innovate service.

Best Service Event: Swing For a Cause, Amnesty International

Recognizing the campus group or specific event that proved to be impactful by engaging and educating a significant number of volunteers and created a meaningful difference for the population served – whether locally or in another community.

Recognizing the student organization/chapter whose philanthropic efforts have made the most impact on our campus while supporting a local/national/global cause. The most funds raised per capita and the most innovative way of raising those funds is a factor in selection.

Honoring a student who shows outstanding leadership to improve the lives of the LGBTQ communities on campus and in the surrounding local area.

Recognizing a student that is passionate about leadership education and its practice. This student should bring innovative ideas to the table and exude a high level of commitment to empowering other student leaders.

Recognizing students whose leadership has been most impactful during the past academic year.

Recognizing a Greek man making the greatest and most positive impact on the fraternity and sorority system during the past academic year.

Recognizing a Greek woman making the greatest and most positive impact on the fraternity and sorority system during the past academic year.

Recognizing a rising junior (current sophomore) who has shown involvement and leadership within the W&L academic and extracurricular communities and who has furthered discussions of women’s issues on campus and beyond.

Awarded by the Student Affairs Committee to an undergraduate student who demonstrates extraordinary commitment to personal scholarship and to the nurturing of intellectual life at Washington and Lee.

Recognizing the event that best impacted Washington and Lee during the current academic year.

Not Unmindful of a Sustainable Future Award: Shlomo Honig ‘18 and Hannah Falchuk ‘18

Recognizing students who leads sustainability efforts either for the W&L campus or for our global community.

Recognizing the student organization or student-led event that has made an impact towards sustainability related efforts either on the W&L campus or in our global community.

Recognizing the student organization that has shown excellence in leadership, management and programmatic efforts. Allocation of funds is a factor in selection.

Adviser of the Year: Tyler Dickovick

Recognizing a campus adviser who goes above and beyond in their efforts to support student initiatives, foster relationships and provide opportunities for new experiences.

Recognizing a student who has made the greatest contribution to the Division of Student Affairs.

Recognizing a student who has brought the most depth and breadth to the university during the past academic year.

Honoring seniors for their campus leadership.

Recognizing two outstanding student leaders who demonstrate leadership and commitment to the Washington and Lee community as determined by the Vice President for Student Affairs and Dean of Students.