‘A Beautiful and Complex Country’ A grant from the Endeavor Foundation allowed Tiffany Ko '20 and Jiwon Kim '20 to study religion in South Korea during summer 2017.

“Thanks to this project, I learned more about religion than I would have expected, especially since I am a science major. I think that speaks to the liberal arts education, which I am so fortunate to be experiencing.” 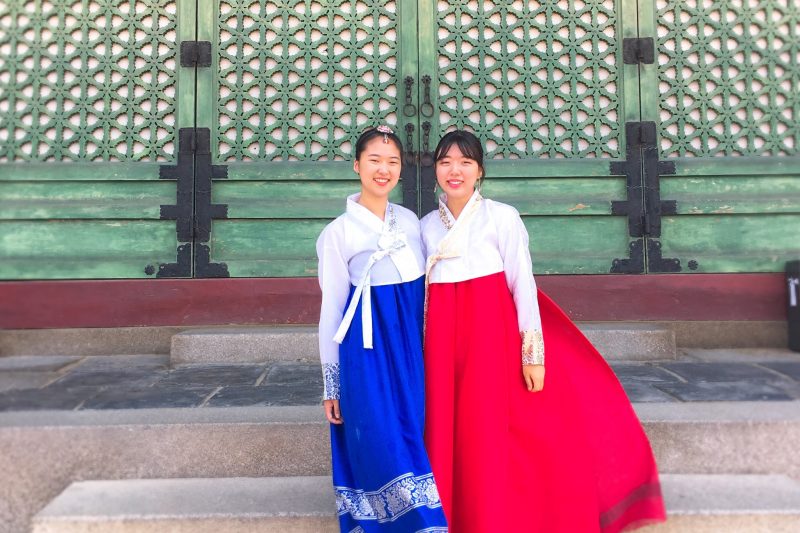 Tiffany Ko ’20 and Jiwon Kim ’20 at Gyeongbokgung, a Joseon dynasty palace in Seoul.

The program, which is funded by part of a $219,000 grant from the Endeavor Foundation (formerly known as the Christian A. Johnson Foundation) is now in its third year. Tiffany Ko and Jiwon Kim, both members of the Class of 2020, traveled to Kim’s home country, South Korea, to study the Western influence on Buddhism and Christianity there.

Please briefly describe your project. Why did you choose this topic?

We planned to compare Christianity and Buddhism in Korea, and how both religions open up conversations about mental health. Once we got there, we found that religion was more complex than we thought, since Korean history is largely defined by religious layering. We chose this topic because Korea has such a rich history of religion that neither of us had fully experienced yet.

We traveled to Buddhist temples and Christian churches to learn about traditions and modern interpretations of each religion. We learned wood sculpture (sot-dae) and folk painting (min-hwa) from expert shaman artists whose lifestyles reflected their work. For the first half of our stay, we were in the capital city, Seoul, so we also got to visit many historical sites that tied into our topic of religion.

Korean shamanism from pre-historic times has established a foundation of prayer and deification. Since then, Buddhism, Confucianism and Christianity have also entered Korea’s religious culture. This resulted in a layering of religions, through which the practices of each religion influence each other. For example, many Korean Christians participate in early morning prayer, which reflects similar rituals in shamanism and Buddhism. Since Buddhism and Christianity are the most widely practiced religions, these have become avenues for conversations about mental health.

What are the most important takeaways from the research to share with the university audience (and beyond), and how do you plan to do that?

The most important takeaway is that Korean religion and culture is more complex than it seems, so many religious practices are unique to South Korea alone. We plan to share our experience through a presentation on Parent’s Weekend and another one during PAACE’s Lunar New Year celebration.

Jiwon, what was it like introducing Tiffany to Korea? When you saw it through her eyes, did it look different in any way?

It was very interesting to watch Tiffany’s reactions to many cultural findings and history as she has never had a sufficient education on Korean history. She was particularly shocked when older people treated her according to a Confucian hierarchy. Because she looks Korean, but she is Korean-American, many Koreans were confused and did not know what to expect from her. Older people especially would comment about her way of using chopsticks or her word choices after she explained that she was from America, which they would not have done if she did not explain. I always feel like a foreigner when I come back to Korea, as I have been studying in America for seven years now. But watching her struggles comparably made me feel more “Korean.” In that sense, I was more confident about showing her around and telling her about the culture.

Tiffany, what were your impressions of South Korea after the trip?

I came away with the impression that South Korea is such a beautiful and complex country. Even though some situations were frustrating, I learned to respect the cultural differences. I assimilated rather quickly since I could draw on the Korean side of my upbringing. This also helped me engage in meaningful conversations with local Koreans. After spending time with Koreans of all ages, different religious backgrounds, and different socioeconomic statuses, I saw how South Korea is made up of a wide variety of people, and how each and every one of them represents Korea.

We enjoyed the hike up Songnisan Mountain because we visited a famous Buddhist temple, and we also got to enjoy a beautiful view at the end of the hike. We met many interesting people on the way, including very patriotic Koreans and people who owned a restaurant in the mountains. We even ate one of Tiffany’s favorite dishes — dotorimuk, or acorn jelly — at that restaurant during the hike.

Jiwon: I initially entered W&L wanting to major in religion, which made the prospect of learning about Korean Buddhism and Christianity very appealing. I am a Christian and have experienced both Korean and American church enough to know the difference between two churches, and the project explained why they were so different even under the same roof and how Korean society has formed in religious aspect. I now feel more confident as a Korean to explain the significance of religion in Korea and how religions have influenced the current society.

Tiffany: Thanks to this project, I learned more about religion than I would have expected, especially since I am a science major. I think that speaks to the liberal arts education, which I am so fortunate to be experiencing here. Going to South Korea has helped me get in touch with my cultural roots and recognize that every person has a unique background. I also intend to learn more scientific Korean vocabulary so that I will be able to collaborate internationally in the future.