“Not only is it a valuable, real-world educational experience, but it’s something that no student who participates will ever forget.” 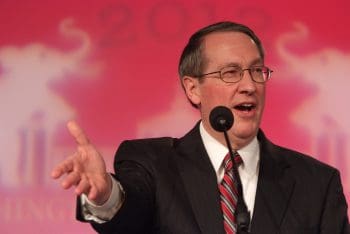 Representative Bob Goodlatte is a member of the U.S. House of Representatives, serving Virginia’s sixth district. Rep. Goodlatte has been a member of Congress since 1993. He has been the Chairman of the House Judiciary Committee since 2013. He has attended past conventions, and spoke most recently during the 2012 Convention Weekend. He is a 1977 graduate of the Washington and Lee University School of Law.

For 108 years now, Mock Convention has been a significant event in the lives of W&L students. Why do you think it is so enduring?

I’ve never experienced an event quite like the Mock Convention. It’s a massive undertaking. Not only is it a valuable, real-world educational experience, but it’s something that no student who participates will ever forget. It’s the involvement of those students that has kept this event going for 108 years. The success of the Mock Convention is a testament to the generations of W&L students who have worked to continue this proud tradition.

What are the main benefits you want students to gain from their involvement with this year’s Mock Con? How does Mock Con prepare students for their roles as informed citizens? For careers in politics?

There is nothing more important to the political process than engagement. I think we’ve seen that the youth vote can have a significant impact on the results, and I’m hopeful that the Mock Convention will help spark a lifelong involvement — or at least interest — in the political process. For those thinking about careers in politics, I can’t think of a better setting in which to get your feet wet.

How does Mock Con compare to the real thing?

It’s remarkably similar. It truly feels like the Republican National Convention, just on a smaller scale and located in the heart of the Shenandoah Valley.

What are your memories of your interactions with students during your previous appearances as a member of Congress at Mock Con?

It’s the students that make this event the success that it is, and it’s quite impressive to see all of these young people working together. I’ve enjoyed talking to them during my time at the Mock Convention. I’ve always been struck by the level of professionalism and commitment. They want to be there to participate, and they are really into it! I think that’s a great sign for the future of politics.