“I guess you could say I was taught how to learn, then I learned how to teach.” 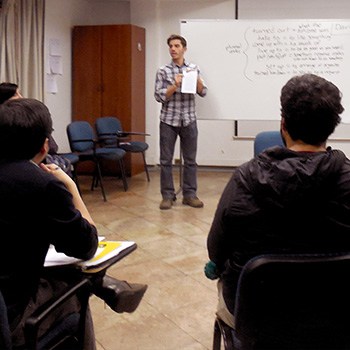 I saw the fireworks on the 4th of July. But my fireworks, 5,000 miles south of the United States, were not celebrating anyone’s independence. Rather they were celebrating Chile’s win over Argentina in the final of the Copa America, Chile’s first-ever win in their 105 year history in the soccer futbol tournament. My host mother, Mirtha, was too nervous to watch the game, so I shouted her updates in Spanish from the other room. It took me by surprise to find her tearing up at the sight of the fireworks: Try as I might, as a foreigner I will never fully understand what this game means for the country of Chile.

Hours later, Mirtha and I started to talk about the course I would begin the following week, teaching me how to be an English teacher. I asked her if she would ever want to learn English. She looked down immediately and rejected the idea out of hand. As with many things in her life, the idea of learning English was an opportunity she hoped to provide for her beloved son, but not one she felt capable of taking for herself.

The country of Chile is longer than most people realize. If you started driving off the Pacific Coast of San Diego and drove northeast until you hit the northeast tip of Maine, you would still need to drive another 50 miles into the Atlantic Ocean before you reached the full length of the country of Chile. Long and thin, and impossibly full of natural beauty, all of the infrastructure and a third of the population of Chile center in Santiago, the capital city. Parents like Mirtha who want their children to learn English and have a good education dream of sending them to Santiago.

There were nine of us in the course. Nine people from eight countries and five continents, with 14 languages spoken between us. I was not only the youngest by about seven years, but also the only person hailing from the United States. It’s an eye-opening experience to be the sole representative of a country of 330 million: All of your opinions implicitly become the opinion of all Americans; your accent becomes the accent of all Americans; your story becomes the American story.

It’s a lot of pressure. When your words start to define you, you start to watch them more closely. It’s impossible to show people how you say what you say without asking yourself why you say it. Because in the course, those words, that language (English) was really the only thing that united us. It was not only our way of communicating, but also our way of expressing who we are and where we come from. English was our home, our comfort, our subject of study, our goal. English was the one desire we had in common — to teach it to speakers of other languages.

The Cambridge Certificate in English Language Teaching to Adults (CELTA) is widely regarded as the most prestigious foreign language teaching certificate in the world. Native speakers of English with a college-level degree and this Cambridge University course can realistically expect to find a job teaching English anywhere in the world with little trouble.

The course was billed as ‘intensive,’ but it feels cheap to sum it up in just that one word. I averaged between 11 and 12 hours daily spent at the Chilean British Institute: lesson planning, taking classes, prepping, completing written assignments, observing other teachers, teaching myself, and of course frantically teaching myself all of the language structures that I would then later teach others: phrasal verbs, third conditionals, how to pronounce the word “memorabilia.” It amazed me how much I was able to learn in such a short amount of time.

One of the very first tips they give you is to learn your students’ names as quickly as possible. What they don’t tell you is what happens once you do. As soon as you learn those names and start to get to know your students, the most amazing thing happens: They become real people. They become people with dreams, hopes, fears, struggles and grand plans for the future. Like Luis, who hopes one day to go to California to work and earn a Master’s degree. Or Camilla, who’s hoping to get a research fellowship at Stanford. While painfully shy at speaking in English, she is in fact quite a strong reader.
When you’re teaching adults, there’s no such thing as a disaffected student. They are there in your class because they want to be there. They’re hungry to learn. They know exactly what they want and what they stand to gain from your teaching. And so teaching never really feels like teaching. It feels like a gift. It feels like a privilege. It feels like helping people open the door to the life they want — giving them opportunity, giving them a voice.

I learned so much in Chile. I learned about my home, the United States, and what it means to be able to speak its language. Mirtha and others taught me so much about their home, Santiago, and how to speak its language. After spending time immersing myself in learning the Spanish language and learning about the culture of Chile, the Johnson Opportunity Grant gave me a chance to learn about the English language, and to teach others about my own culture. I guess you could say I was taught how to learn, then I learned how to teach.

The day after my course ended, Mirtha drove me to the airport for my flight back to the United States. I asked her once more if she would ever want to learn English. This time, instead of rejecting the idea out of hand, she smiled, and told me that I would have to come back and teach her. I smiled back and said quizás: Maybe I will.

How does your work under the grant apply to your studies at W&L? For my career I intend to be a teacher in some capacity, and through my Johnson Opportunity Grant I gained invaluable experience studying pedagogy, observing experienced teachers and, most importantly, actually getting up in front of people and teaching.

What was the most unexpected aspect of your grant experience? I was constantly surprised and delighted by the profoundly multicultural nature of my experience. I saw the world through so many different lenses, and had my view of it turned upside-down and inside-out on a daily basis.

Post-Graduation Plans: Upon graduating from W&L I intend either to teach English abroad or to enter into a graduate program in Psychology.

Favorite Class: For me, it’s not the individual classes, though they are of course amazing, but how all of your classes constantly coalesce together in unexpected ways, regardless of how disparate the disciplines may be.

Favorite Campus Landmark: You find a home in all the different buildings on campus: Elrod Commons, Lenfest, Leyburn, the Science Center, Hillel — I have too many favorite spots to count!

Advice for prospective or first-year students? Never stop adding on to yourself. Go, today, and introduce yourself to as many of W&L’s incredible administrators and professors and students as you can. You don’t need a reason why. Stretch yourself: Say yes to the opportunities W&L gives you. Or, at least, don’t say no.