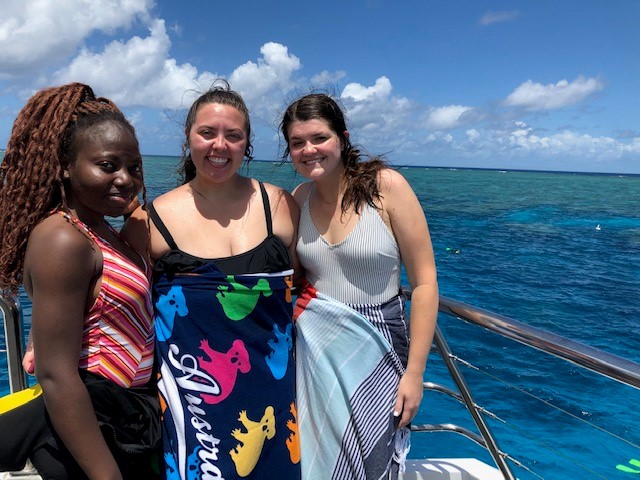 ‘A Gilligan’s Adventure’ Temi Adeyanju '21 describes her many adventures in Australia during her Internship and Study Semester in Asia-Pacific.

Although I am leaving the country in a couple of days, there will always be a part of me that will remain an Aussie. 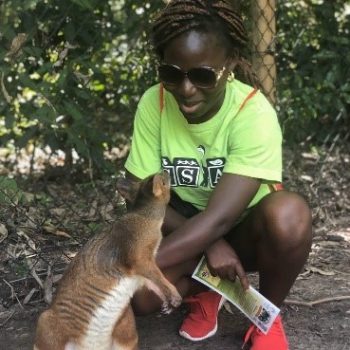 Temi Adeyanju ’21 and a wombat

It’s spring break for us, and where else to spend it other than the Hawaii of Australia, the majestic Cairns city, featuring some of the beautiful sceneries in the world. Disregarding the almost 100 AUD I had to pay at the airport for my overweight suitcase, I’d say everything else panned out perfectly.

The first order of business after arriving at Gilligan’s Hotel & Resort was visiting the pool. The pool, although smaller than what we expected, was beautiful. As a poor swimmer, this was a plus for me because my feet could actually touch the ground. After spending a couple of hours in the pool and drying off in the sun, we got ready for dinner at the Cotton Club. Despite the name, there was no cotton involved. We had a variety of options—from chicken parmesan to a regular ‘ol beef burger. After dinner, most of us got dressed up and went down to the resort’s night lounge (despite our early meet up the next morning).

The next day, we caught up with a ferry that took us on an adventure to the Great Barrier Reef. Popping two ginger pills on the boat did nothing to stop my motion sickness. Despite this discomfort, I had great fun snorkeling—a first experience for me—around the Great Barrier Reef. Geared in my wet suit, snorkeling equipment, life jacket, and a pool noodle, I stepped in water deeper than five feet for the first time in my life.

The day was not over, though. Lunch on the boat was amazing, and I helped myself to four pieces of carrot cake. I’m sure a health professional will reprimand me for that, but you only live once! After the boat returned to the harbor, we headed back to the resort and got ready for the night.

The next day, we took a private bus tour to the waterfalls near Cairns. We visited the Josephine Falls with its rockslides—in which everyone swam but me. Next, we visited the exquisite Millaa Millaa Falls, which apparently were formed from a volcano eruption back in the day. We also visited the magnificent Lake Eacham that houses some of the most beautiful fish and ONE FRESHWATER CROCODILE, which meant no swimming in the lake. We played frisbee and met two guys from Italy who played way better than I did—making me the worst ultimate frisbee player that the lake has ever seen. The last tour of that day was to Curtain Fig National Park. Here, we saw the biggest fig tree. It grew out of another tree, killing off its host tree. This is a parasitism type of symbiotic relationship (my high school biology professor will be proud of me for remembering this).

That same day, we had lunch at the beautiful Lake Eacham and that night the resort hosted a talent show.

On Tuesday, we took the ferry to Fitzroy Island, where we climbed the summit and saw the amazing views the island has to offer. After climbing, we had lunch and spent the rest of the day at Nudey Beach tanning in the sun. That night, we took part in a fun pirate bingo game at the resort.

And yes, the adventure continues! The next day, we went to Hartley’s Crocodile Adventures, where a couple of us fed crocodiles and the others (including me) watched. We saw and met various beautiful animals: the adorable Koala that I just want to cuddle with while I sleep, beautiful kangaroos, some of which I bonded with and would have taken home with me if it was allowed, and humongous crocodiles. I learned from the feeding session from the coach that Australians are not very creative with names, as saltwater crocodiles are called salties and the freshwater crocodiles are called freshies. We also saw beautiful tamarins, cassowaries with the built-in hats, not so shy wombats, and much more amazing wildlife.

The variety of delicacies that I have enjoyed in Australia have topped off the adventures. From the Happy 410 Korean restaurant—which does give off a happy vibe—the Thai restaurant with amazing spicy drunken noodles, to the beautiful Lily’s Café across the resort. I am looking forward to the time I have left to spend in this beautiful city.

The two months spent in Australia have been some of the best of my life. The one week in Cairns will remain my favorite Aussie adventure—not even the 30-cent Mr. Chen’s Beef Noodle Restaurant can beat it. Although I am leaving the country in a couple of days, there will always be a part of me that will remain an Aussie. I definitely plan on returning to visit the country that has stolen a portion of my heart. And while I will miss Australia, I am looking forward to becoming a Singaporean in a couple of days.