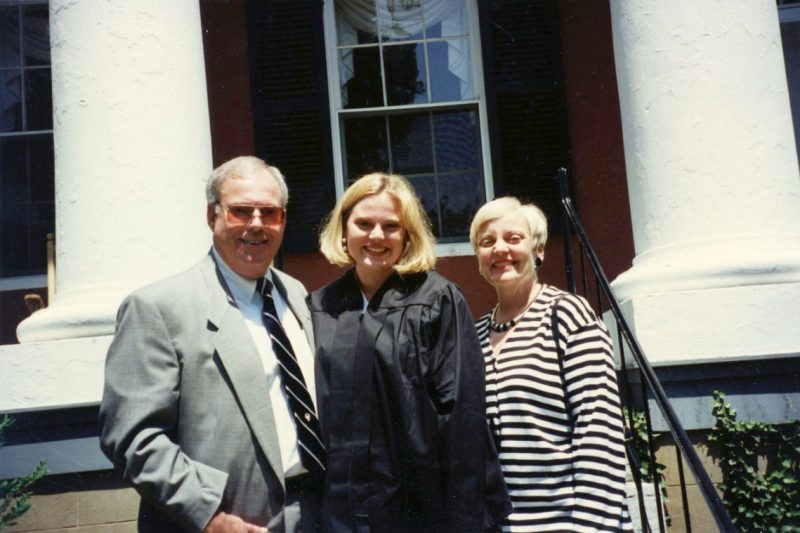 “Though letting go of the past bears pause, for me, this naming also weaves together an honor truly befitting our tradition. I’m proud to celebrate Pam Simpson’s contribution to W&L, and I believe all of the past residents of the Lee-Jackson House would concur.”

For me, and I imagine many other graduates, the board’s email notification on renaming campus buildings stirred many emotions: nostalgia for the past, gratitude of forward vision and maybe a twinge of sadness. Speaking with my father, Haywood Ball ’61, about the changes, I realized I have a unique perspective to offer.

After graduation in 1996, my great-aunt gave me a treasured family possession, a set of Washington and Lee red Wedgewood plates featuring different scenes on campus: Lee Chapel, the Colonnade and Tucker Hall, to name a few. Yet, one plate I received had many duplicates. That was because the Lee-Jackson House was our house, specifically my grandmother’s. Daughter of W&L Law School Dean W. H. Moreland, my grandmother, Margaret Ann Moreland Ball, grew up in the Lee-Jackson House. It was from this house, beloved to so many, that she walked to and from high school, passing my grandfather’s fraternity house (Jack Ball ’32, ’35L) and catching his eye.

By the time they married in 1936, her family resided in what is now the Hotchkiss Alumni House. Following a ceremony at R.E. Lee Memorial Episcopal Church (now renamed Grace Episcopal Church), guests walked across campus to her parent’s home for their reception.

In 2000, my now-husband Michael and I asked W&L if we could recreate my grandparents’ wedding, using the Alumni House for our reception. With a little trepidation on the school’s side and a hard sell from my parents, the university granted our wish, which was the first private event hosted there.

So on a magical night in June 2001, we, too, crossed the Colonnade on our way to a most enchanting reception. It was as gorgeous a setting as it was meaningful to my family. The campus sparkled with darting fireflies. Live bluegrass music prompted spirited dancing and revelry on the porch. Even Southern Living published the event in an issue of their Weddings magazine.

Mine is a deeply historic W&L love affair. As I am the fourth generation of my family rooted at W&L, I was also notably our first female alum. At age 8, my father brought me to campus for the first time. I was so determined to attend that I declared my intention to become an attorney, as the Law School was then the only means for a female to attend W&L. Luckily for me, that barrier was knocked down. My graduating class marked 10 years of Washington and Lee co-education. And it was a remarkable time with much transition, being 75 percent male during my stint. Just 10 years later, W&L would see equal male and female matriculation. Sometimes, though, I can admit, I felt like a pioneer.

To the credit of two exceptional women leaders and professors* on campus, my W&L experience was filled with a great purpose. Today, I am specifically honored that one of them, my own mentor and advisor Professor Pam Simpson, has been named to the house that means so much to me. Professor Simpson’s quiet dignity, strength and demand of excellence developed in me core strengths, which prove the cornerstone to my career: fearlessness and total commitment. She was patient and fair, but she expected more from me than the sorority girl she saw my freshman year—and she got it. Pulling me aside at the end of my senior thesis studio art show, she told me in earnest that she was proud of what I had done with my opportunity. Her words still ring as one of my most cherished accolades. My self-discovery in art, as in life at W&L, was not easily won, but earned and honorable. I had come to understand the significance of opportunity she forged for me, and for all women at W&L.

I am humbled by the history and legacy of this moment. Though letting go of the past bears pause, for me, this naming also weaves together an honor truly befitting our tradition. I’m proud to celebrate Pam Simpson’s contribution to W&L, and I believe all of the past residents of the Lee-Jackson House would concur.

* Professor Kathleen Olson-Janjic, the Pamela H. Simpson Professor of Art, is the other W&L woman who broke down walls, opened my potential and poured herself into my education. I am forever grateful for these two leaders and for the high academic standards that W&L brought to the Art Department. Today, I am a licensed illustrator/commercial artist with artwork appearing on gift wrap, seasonal flags and gift products. Thanks to the mentorship of Olson-Janjic, I attended Parson School of Design after Washington and Lee, rounding out my painting education with graphic design and illustration.