A New Generation of W&L Friendship What started as a “Tale of Two Evans” 33 years ago has sparked a new friendship for first years Max Patterson and Spratt Allison.

Evan Allison ’93 and Evan Patterson ’93 met at Washington and Lee during Rush Week in 1989. Going through the steps to join Sigma Chi fraternity during their first year brought them close together, and that’s the way it stayed throughout their college experience and beyond. But no one could have foreseen that they would have sons the same age who would end up going to W&L the same year and develop a similar bond.

“Max is already like a brother to me. Our friendship grew so quickly, and we just seem to get along effortlessly. Sometimes, we go to Frank’s to eat where our dads used to go, and we have running jokes from stories our dads have recounted. Overall, Max is already one of my best friends, and he has been a solid shoulder to lean on through this period of transition in my life.” ~ Spratt Allison ’26

Max Patterson and Spratt Allison had met a handful of times, and mostly at W&L reunions, because of their dads’ friendship through the years. While they certainly knew each other, they really did not interact outside of those bounds. During move-in, the Allisons and Pattersons stayed together in a rental property, allowing Max and Spratt the chance to reconnect, and as it turned out, they ended up living on the same hall and spending a lot of time together throughout fall term.

“Max is already like a brother to me. Our friendship grew so quickly, and we just seem to get along effortlessly,” Spratt Allison ’26 said. “Sometimes, we go to Frank’s to eat where our dads used to go, and we have running jokes from stories our dads have recounted. Overall, Max is already one of my best friends, and he has been a solid shoulder to lean on through this period of transition in my life.”

Max Patterson ’26 confirmed their proclivity for inside jokes and also shared that it was comforting to know someone going into pre-orientation and orientation. “We never felt any pressure to force a friendship or anything, but we instantly clicked and have been told we’ve almost developed our own language,” he said.

It happened for Evan Patterson and Evan Allison in much the same way, and it has been a delightful experience for the two to watch their sons’ friendship unfold. Patterson and Allison got to know each other first as fraternity brothers and then worked together on the Student Recruitment Committee. While the two pursued different areas of study and did not share classes, they spent a lot of time together in the evenings and on weekends. They also both worked on campus one summer, Allison in the Alumni College and Patterson in Admissions.

“Seeing the way that Max and Spratt’s friendship has grown, and the great group of friends they have made already, is so special.”

After college, they were in each other’s weddings and took a couple of vacations together with their wives, and eventually with their families. With busy lives, Patterson and Allison did not see each other as often but always fell right back in line with their easy friendship whenever they were able to connect. Allison is a partner at Miller & Martin law firm in Chattanooga, while Patterson lives in Kansas City and is a customer success manager with the software company, Movista.

“Reconnecting now with these opportunities as W&L parents, it reminds me how much we have in common, and that has further strengthened our friendship,” Allison said. “We spent four years growing up together, and seeing our kids as really close friends now is crazy.”

The Allisons and Pattersons stayed together again during Parents and Family Weekend in October and have already booked a place for next year. “It is so exciting to get back to campus more often and to have more opportunities to connect,” Patterson said. “Seeing the way that Max and Spratt’s friendship has grown, and the great group of friends they have made already, is so special.”

While both Max and Spratt applied to a number of other schools, their paths to W&L were different. Both of Spratt’s parents are W&L alumni, as Allison married Cory Chung Allison ’94. They have been engaged volunteers for the university over the years, and while they never had any expectation that Spratt would attend W&L, he was certainly exposed to the culture. “He didn’t just want to follow in our footsteps, and so he applied to and we visited close to a dozen schools,” Allison said. In the end, it came down to W&L and University of Richmond for Spratt. Patterson’s wife Kristin is an alumna and his daughter is a senior at University of Richmond. Spratt was able to connect with her during his college search.

“Following in my parents’ footsteps was never really my plan until I was already here,” Spratt Allison mused. “They did a fantastic job of keeping their bias out of my decision, and yet, I always should have known I would end up a General.”

Max Patterson fell in love with W&L during those reunion weekends he attended with his dad. “The sense of community that exists at W&L really appealed to him,” Patterson said of his son.

“Ever since my first visit to campus 15 years ago, W&L has been my dream school. Even before I really had a frim grasp on the concept of college, I could tell Lexington was where I belonged — and while W&L may not have been on my radar had it not been for my dad, my love for the school is entirely my own,” Max said.

Now as alumni who are serving together on their 30th reunion committee and who are first-year parents, Evan Allison and Evan Patterson have even more experiences to share. Their enthusiasm is palpable. “This was a great school when we were here, and wow, now it is even better,” Patterson said. “It is so exciting to see the many, many opportunities available and to meet the impressive students there now.”

Allison looks forward to coming back to campus in the spring for both Parents Leadership Council Spring Weekend and Alumni Weekend. “That sense of community we felt when we were at W&L — Max and Spratt feel it too — and that is so gratifying to witness and share,” he said. 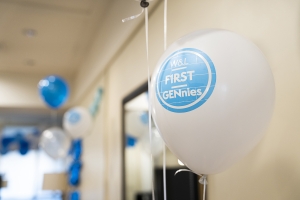 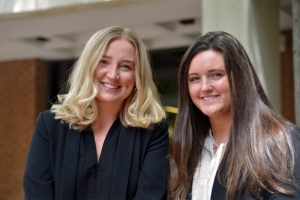 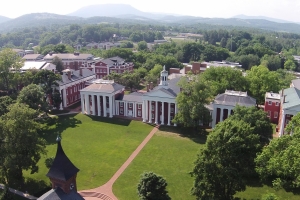