A Time to Heal Bruce Rider '66, who served as an Army intelligence officer in Vietnam, was moved to write this essay on the occasion of his 20th reunion.

“It is still not easy to get beyond the losses, the deaths, the anger, and the pain of the Vietnam experience.”

The following essay was first published in the W&L alumni magazine in 1986.

At first I did not feel entitled to return to the 20th reunion of the Class of 1966.

The invitation in the mail outlining the planned events seemed to be not only from another place and time, but from another world.

The succeeding years of Alumni Magazines chronicled the careers and personal growth of graduates leading lives of excellence, of philanthropic contribution, of improving the very fabric of the communities in which they lived.

In 1966, I believed that my life would go in a similar direction, that the knowledge, discipline and honor developed at Washington and Lee would propel me toward the significant contributions of those who had completed their formative time in Lexington to go out into the world to lead and to serve.

As a captain in the U.S. Air Force, one of my four years of service was in South Vietnam in 1969-70. How does one relate, how does one describe, how does one comprehend the horror, the terror, the overwhelming power of war’s only true victor—death itself?

My Bronze Star Medal was reported in the Alumni Magazine, as well as such other events as the births of my sons and changes in jobs in the years that came after the war.

But how to report and record the true losses from the war­—the pain, the not infrequent death of hope itself?

Among other losses from the Vietnam war for me was the loss of most of my eyesight.

A friend read me the planned agenda for the May 1986 re­union. Suddenly, I listened with full attention: a ceremony would be held in Lee Chapel to honor a classmate, a Medal of Honor winner, one of the 18 men from Washington and Lee to die in the Vietnam war. 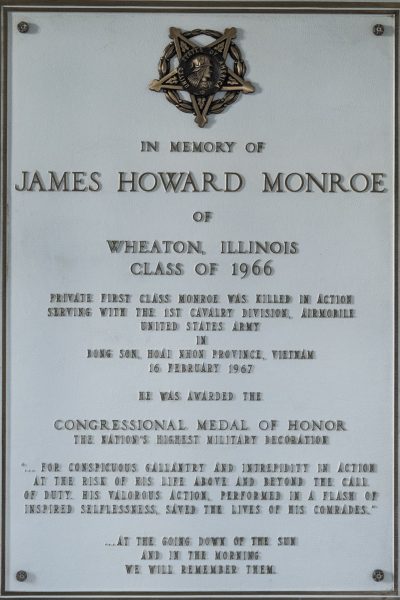 This plaque in Lee Chapel honors the bravery of James Howard Monroe ’66.

Such a ceremony was an outstanding and proper event to be included in the reunion, of course. But Vietnam still evokes such mixed feelings and memories. Much about the war was simply crazy, bizarre, unreal, nothing like the myths and mystiques of wars and battles read about in books in Lexington. I came to the reunion in great part drawn by the attempt, at least, to place an honorable marker on the pain and loss of those Vietnam years.

The ceremony in Lee Chapel was genuine, was authentic, was in fact healing.

For me, this was the first public recognition for the time in my life when I risked everything I had so that the freedoms I had grown up with (paid for by earlier generations of American men and women) could be maintained for those who would follow after me.

In retrospect, what truly amazes me is that Robert E. Lee could come to Lexington so soon after a bitter war and devote his energy, imagination, and life to the future of his region and of his nation. Having seen the dark heart of war, Lee turned his attention and abilities almost immediately to the work of peace and the rebuilding of the values of life and honor.

For most Vietnam veterans, it has taken at least 10 years to bring our wounded souls and hearts back to anything resembling fullness and hope.

The inspiration for me now— the almost unbelievable concept— is that Lee could lay down the dreadful past and work with imagination and determination to forge a meaningful future, to provide a legacy for accomplishment and honor that lives today on this campus and in the hearts and minds of our students and graduates.

It is still not easy to get beyond the losses, the deaths, the anger, and the pain of the Vietnam experience.

But, as in so many areas, Robert E. Lee continues to lead the way. To restoration. To forgiveness.
To the need for and value of service to others—so that by taking such action, freedom and justice will prevail over the forces of darkness, discouragement, and despair.

It was not easy to come back to Washington and Lee in 1986, to have to look inward at the cost of self and hope of these past 20 years.

Now I know that it was right to return.

The bedrock values of Washington and Lee remain. In fact, they grow stronger.

And these values will continue to sustain those of us who fought in Vietnam as we look now to the coming years of life, remembering along with Robert E. Lee that it is up to each of us to work to build a world worthy of the Creator God who gave us each the gift of life, so that we might work together continually to have honor, peace, and even joy.

A portrait of Bruce Rider ’66 in uniform.