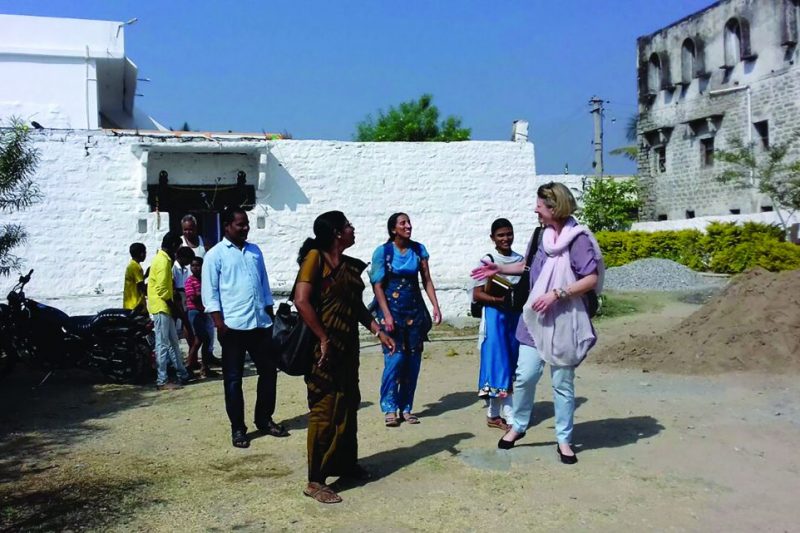 GLOBAL REACH
Alison Krentel’s classroom is the world. She not only teaches a master’s-level class to 300 students worldwide, but she also travels the globe seeking the elimination and control of tropical diseases.

She focuses on some of the 20 diseases known as neglected tropical diseases. “These are diseases that have been neglected and that affect neglected people,” she said. Most maim or disable their victims, and some cause blindness.

A former Peace Corps volunteer, Krentel worked in Gabon, in central Africa, during the height of the HIV-AIDS crisis in the 1990s, spearheading a communications campaign to help people understand the disease. A stint with Doctors Without Borders in Indonesia taught her the business side of humanitarian work and what issues needed attention.

TACKLING LF
Currently, she’s focused on lymphatic filariasis (LF), a disease spread by mosquitoes that deposit a parasite when they bite. Subsequent damage to the lymph system can cause serious swelling of limbs and frequent bacterial infections. In the past year, this project has taken her to Indonesia, Haiti, Papua New Guinea, India and Ivory Coast.

Funded by the Bill and Melinda Gates Foundation, Krentel’s work on LF focuses on tracking how people in the affected regions accept the drugs to treat LF, even if they lack symptoms of the disease. In order to completely eliminate LF, everyone needs to take the medication each year for four to six years.

“In the field, we can work under difficult circumstances sometimes — no electricity or running water,” she said. One night her team killed 10 scorpions in their room before going to bed.

A HIGHER GOAL
Krentel entered the field of global health because of her desire to travel and because of family members who devoted their lives to helping others — teachers, doctors, nurses and ministers.

Her grandfather, in particular, was a model for compassion. A doctor in rural Quebec, “he had a heart for helping people.” He often invited people into his home who had addictions and other problems. Her minister father and mother invited “stray people” to join the family for Sunday dinner, so “for our family, this was normal.”

Krentel lives in Ottawa, Canada. The travel involved in her work might seem glamorous to some, she said, but “it can be a hard job with a lot of sacrifices.” She needs a reason “outside myself” to leave her husband, Paul Wheatley, a physician, and two children, Thomas, 9, and Charlotte, 7, to work in sometimes challenging conditions.

What keeps her going? “I try to remember a higher goal and the people I’m trying to help,” she said. “I need to see them and hear their stories.”

WORK: Researcher, Bruyère Research Institute; Senior Research Fellow, WHO Collaborating Center for Knowledge Translation and Health Technology Assessment in Health Equity, Centre for Global Health, University of Ottawa; Honorary Fellow and External Faculty, London School of Hygiene and Tropical Medicine. She also collaborates with researchers at Washington University, in St. Louis, and the Task Force for Global Health, and is a founding member of the Canadian Steering Committee for Neglected Tropical Diseases.

MAJOR: English and art history, with a focus on 17th-century Dutch painting. She uses the French required by the art history major in her medical profession.

MEMORABLE PROF AND COURSE: As a confident first-year taking Sidney M.B. Coulling ’46’s English course, she was surprised to receive a D on her first paper, with a “see me” written in red across the top. Under his and others’ guidance, “I learned to write. It was a great foundation for my education.”

GREEK LIFE: A member of Kappa Kappa Gamma sorority, she noted that hers was one of the first classes with female students in all four levels .