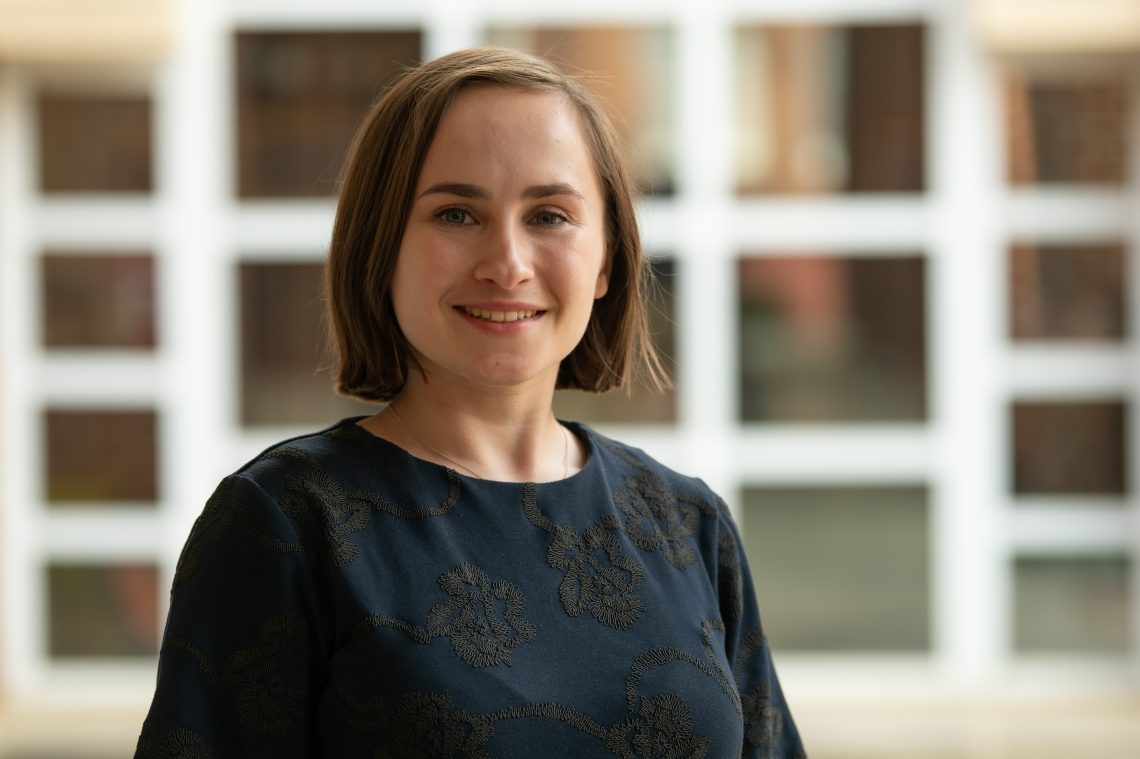 All the World’s Her Stage With the support of faculty and fellow students, Charlotte Cook '19 acted in seven theater productions at W&L while juggling a major, two minors and other extracurricular activities.

“I was continually blown away by the faculty’s dedication to supporting their students both inside and outside of the classroom.”

Q: What factors led you to choose W&L?

In brief: the honor system, close relationships with faculty, and the ability to get to see my friends’ faces every day as we made our way to and from our many commitments.

When I visited Washington and Lee for the first time, I was blown away by our tour guide, Myers McGarry ’17. Out of the many schools I visited, her tour stood out to me as one of the most informative and enthusiastic I had been on. Even on a humid and cloudy day, I could imagine the campus shining in the sunlight. After that visit, I decided that I wanted to be a college tour guide. I consider myself extremely lucky to have been a University Ambassador at the institution that sparked that desire in the first place. Three years later, I served on the University Ambassadors Executive Board. The most rewarding part by far was having underclassmen come up to me and tell me that they were on one of my tours. I’m honored to have been one of the first people to meet some of the brilliant underclassmen that we have now.

Q: What made you decide on your major and minors?

Coming in to college, I was fairly certain that I was going to declare history and theater either as majors or minors. However, I had never taken an art history class before college; my high school only offered a handful of studio art classes. I took my first art history course in Winter Term 2016, and now I plan to attend graduate school to get my masters degree in that very subject. Studying art history is an endless kaleidoscope; one method or theory provides you with one interpretation, and maybe your own personal experience leads your eye to something else. Your classmate asks a question, and suddenly all of the colors shift again. To me, art is endlessly inspiring; in my professional life, I want to use the education that I was fortunate enough to receive at Washington and Lee to show others how art can inspire them, too.

Washington and Lee’s art collection is one of the hidden gems of the campus. Every time I walked to class in Wilson Hall, I passed artworks by Miriam Schapiro, Frank Stella, Robert Indiana, Andy Warhol, Francisco Goya, Mr. Brainwash and Henri de Toulouse-Lautrec, to name a few. W&L also has the only copy of Charles Wilson Peale’s earliest known portrait of George Washington.

Some of my classmates, like myself, were theater veterans, while others had never performed before. As the final act of the evening, I read an original poem dedicated to women throughout Scottish history. To close the night, all of us in the assembly hall – travelers and locals alike – stood together to sing “Flower of Scotland” and “Wild Mountain Thyme.” I will treasure the friends and memories I made in Scotland with me for the rest of my life. Since I dedicated most of my time to theater during the academic year, the Spring Term Abroad option was a great way to spend time away from campus while still receiving the high quality of education I’d come to expect at W&L.

Q: You’ve had some pretty cool summer experiences as part of your W&L education. What can you tell us about them?

During summer 2018, I worked as an arts management intern at Pall Mall Art Advisors in Philadelphia. Our company was responsible for discovering the massive book theft at the Carnegie Library of Pittsburgh. Together, two men had stolen over $8 million worth of rare books. I scoured auction databases and rare book retail websites to see if any had been sold off. Though it took a lot of research, I was able to recover two of the books that were stolen! I also compiled a set of case studies documenting previous multi-million-dollar rare book thefts around the world; the Carnegie Library has used these findings in their public statements to the media. The trial is currently ongoing.

I have also pursued additional acting training outside of my theater minor. In previous summers, I was selected as the youngest acting apprentice in the Shakespeare Theatre of New Jersey’s Summer Professional Training Program, and traveled to London for a two-month Shakespeare intensive at the London Academy of Music and Dramatic Art.

Q: Did any special funding make these experiences possible?

For my study at the London Academy of Music and Dramatic Art, I was fortunate enough to receive the Todd Jones ’85 Memorial Scholarship. This award came at a time of particular financial instability within my family, and I would have not been able to go abroad without it. I also recently won the Christopher Merrill Main ’94 History Award, which will help me in moving overseas to begin my graduate studies.

Q: How in the world have you managed to be in seven theater productions at W&L while also juggling classes and other extracurricular activities?

Auditioning for “Love’s Labor’s Lost” in the first week of my first year at Washington and Lee was one of the most terrifying yet rewarding decisions I made in my time here. After being cast as the Princess of France in “Love’s Labor’s Lost” in 2015, I went on to play six more leads in six more productions: Elinor in “Sense and Sensibility,” Van Helsing in “Dracula,” Julia in “1984,” Tybalt in “The Tragedy of Romeo and Juliet,” Sonia in “Vanya and Sonia and Masha and Spike,” and Ranevskaya in “The Cherry Orchard.”

The W&L Theater Department is a force of nature. If you major or minor in theater, you are required to take courses in every aspect of theater, including acting, stage managing and technical production. I also had a work-study position in the costume shop, so I helped to create custom handmade pieces for every university theater and dance performance. Auditions for shows are open to every student, and because of that, casts are constantly shifting. You never work with the same exact group of people twice, which makes each production that more special. The average production rehearses for about 15 to 20 hours each week for six to nine weeks, which means each show is almost 200 hours of work (and that’s just for the actors)! Thankfully, my professors were always appreciative of my commitment to theater. When “Love’s Labor’s Lost” opened in fall 2015, all four of my professors who were teaching my classes that semester showed up to the performance without my even telling them I was in it. I was continually blown away by the faculty’s dedication to supporting their students both inside and outside of the classroom.

Q: What did your involvement in those productions mean to you?

The amount of praise that I received from both students and faculty after each of my productions reminded me that Washington and Lee is truly a school that encourages a love of the arts. My cast-mates from all seven shows were talented, thoughtful and powerful individuals. They inspired me to give my all every night, for their sake far more than for my own. Although I could never pick a favorite show that I’ve done here, I will always value my time spent playing Van Helsing and Tybalt. Getting cast in those two traditionally male roles was my director reminding me that my ability and talent were far more important than my physical appearance or identity. I love theater because it helped shape me into the person I am today, and I love the Washington and Lee Theater Department because it accepted me unconditionally–in all of my crises, challenges and changes–from the moment I auditioned for the first time.

Q: Were you involved in Greek Life at W&L? If so, what impact did it have on your experience?

I think the unique nature of Greek Life at W&L is exemplified by the fact I was able to hold leading roles in seven university theater productions. When I first came to W&L, I was highly unsure about my chances of success in the formal recruitment process. I ended up choosing my sorority based on the fact that the women in it were sincerely passionate about their individual academic and extracurricular interests. Not only that, but despite their own hectic schedules, they also took the time to support other members and other sororities. Every time I opened a new show, I saw my sorority sisters in the audience. My sorority membership did not dominate my time here, yet I could not imagine my Washington and Lee experience without the wonderful women I met through Alpha Delta Pi.

Q: Did anyone on campus serve as a mentor to you?

I would be remiss if I didn’t mention my three stupendous advisers: Mikki Brock, Jemma Levy and George Bent. Each of them challenged me in the best possible way and shaped me into a stronger student and person.

Q: What are you doing now that you’ve graduated?

I’m moving to London to earn my MA in the History of Art at the Courtauld Institute of Art.

To thine own self be true.

Best place to eat in Lexington? What did you usually order?

Blue Sky Bakery. I always ordered the Say Cheese Sandwich – pimiento cheese on focaccia bread – with a side of black bean salad and a Blue Sky Square for dessert.

I have a Holy Trinity of books: “A Tale of Two Cities,” “The Count of Monte Cristo,” and “The Master and Margarita.”

I’ll always remember walking off stage for the final time in our closing performance of “The Cherry Orchard.”

I can’t pick an absolute favorite, but I had a lot of fun in my French Revolution seminar with Professor Sarah Horowitz during my senior year.

My friend Thomas Agostini ’19 and the Campus Unity Initiative organized the first-ever Washington and Lee Dog Day! We had dozens of dogs and hundreds of students, faculty and Lexington natives show up on Cannan Green to play with them.

I absolutely cannot leave the house unless I’m wearing a matching pair of socks.