An Affair to Research What can today's digital tools tell us about a scandalous crime that happened in Paris more than 100 years ago? A trio of W&L researchers is working to find out.

“We are using a tactic called micro-history, where you examine something extraordinary that happened with the idea that it can tell you about the history of the time.” 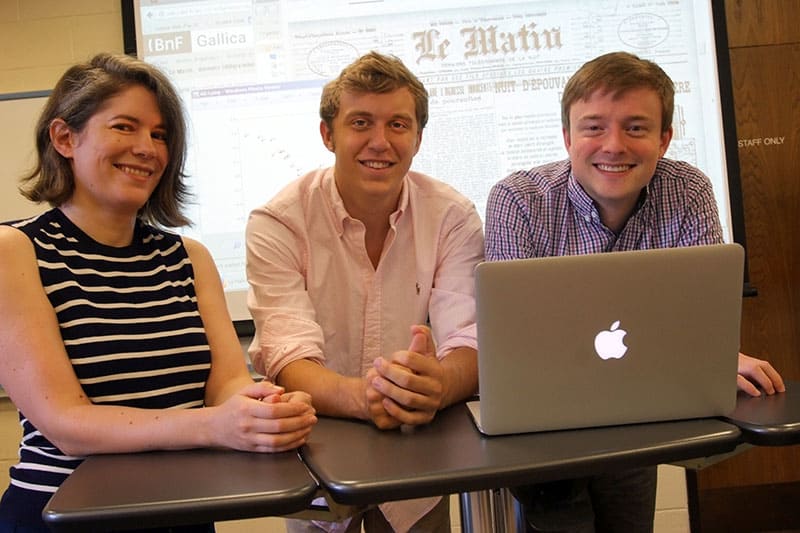 Washington and Lee history professor Sarah Horowitz has spent a year and a half researching an early 20th century scandal involving a notorious Parisian woman and a high-profile double murder.

This summer, with help from Sam Gibson ’17 and Mellon Digital Humanities Fellow and Instructor Brandon Walsh, she has been able to use digital technology to delve deeper into the fascinating “Steinheil Affair.” The goal of their research is to better understand not only the scandal itself, but how it was covered by newspapers – and what that says about the culture of the time.

Marguerite Steinheil, who was born into an affluent family in 1869, married a French painter named Adolphe Steinheil in 1890. But wedlock was no obstacle for Madame Steinheil, who is believed to have carried on a string of love affairs over the years with prominent men, including French President Felix Faure. Faure allegedly suffered a seizure during intimate relations with his mistress, and died just hours later.

Despite her dalliances with powerful men, Steinheil did not achieve national notoriety until 1908, when her husband and mother were found dead in their home. Investigators initially came up with no evidence with which to charge Steinheil in connection with the crime, but her poorly conceived attempts to frame others made officials suspicious. (One attempt involved planting a pearl in the pocketbook of a manservant, then saying it had been stolen at the time of the murders). She was charged with the crime and locked up in St. Lazare prison until November 1909, when she was acquitted after a sensational trial.

Horowitz, Gibson and Walsh set out to analyze articles published in 10 different French newspapers at three different points in history: the time of the murders, Steinheil’s imprisonment, and her trial. Thanks to the Bibliothèque Nationale de France (National Library of France), all of the newspapers they wanted to study had been digitized.

Most of the articles were digitized using Optical Character Recognition, which uses computers to identify printed characters and turn them into words. But OCR can be inaccurate, so Horowitz and Gibson had to retype or correct articles using images of the newspapers as a reference.

The researchers then analyzed the text using digital technology, including a program called Voyant that creates word clouds and examines proximity of words in stories. They used MALLET topic modeling to sort large chunks of text into topics and groups of similar words. This work has allowed them to identify interesting patterns and trends in newspaper coverage of the Steinheil Affair.

For example, they found that early coverage of the murders focused on physical evidence and other concrete elements of the case, such as time, place and detective work. Over time, coverage became more about Steinheil and who she was as a character; references to “wife” and “painter” declined as she was seen more as her own person. They also found that although the woman’s arrest and imprisonment garnered a great deal of news coverage, the media’s attention had begun to drift elsewhere by the time the trial rolled around.

The team also has been able to hone in on how certain newspapers focused on different pieces of the story, and how the language they used speaks to their leanings. In some cases, after the affair with President Faure was dredged up in articles about the crime, the word “patriote” was used as a sort of protective code word for the president.

The newspaper language also provides insight into gender perceptions at the time. Madame Steinheil was widely depicted as a lying femme fatale. “At one time it was thought that women were more prone to lying than men,” Horowitz explained.

As the research continues, the team is using the Natural Language Toolkit to do more detailed analyses, such as searches for first-person language, exclamation points, dialog and direct quotes. “Next we get to think about things like the use of certain words, emotion terms, the cast of characters and when they appear to become more important,” Horowitz said.

Some of the techniques they are using will factor into a Fall Term class that Horowitz and Walsh will teach together. According to the course description for Scandal, Crime and Spectacle in the 19th Century, the class will delve into “the nature of scandals, the connection between scandals and political change, and how scandals and ideas about crime were used to articulate new ideas about class, gender, and sexuality.”

“I have an interest in scandal in general,” Horowitz said, “but we are using a tactic called micro-history, where you examine something extraordinary that happened with the idea that it can tell you about the history of the time, including things like gender roles, culture, politics and the press.”

Eventually, Horowitz would like to write a book about the Steinheil Affair. In late July, the team took its summer research project to ILiADS (the Institute for Liberal Arts Digital Scholarship) at Hamilton College in New York.

Gibson, a history major who is also earning a minor in French, said working on the research this summer has opened his eyes to the many possible uses for text mining. It also happened to dovetail nicely with his existing passions.