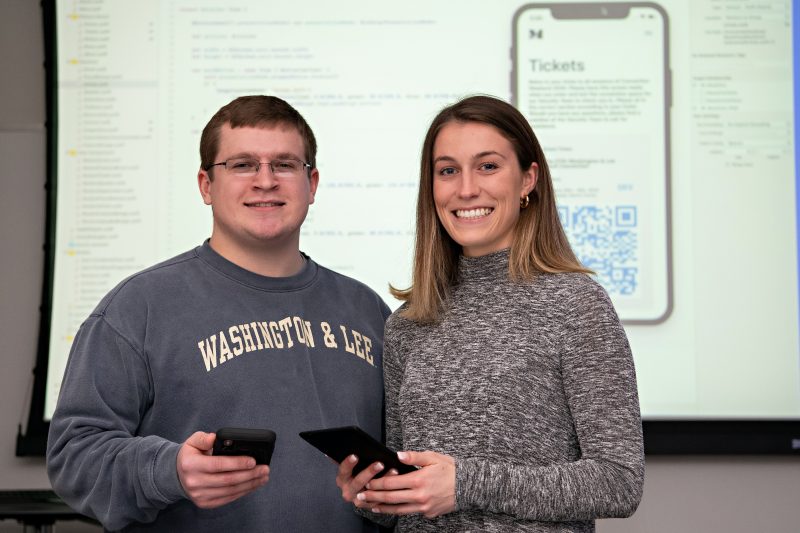 “It’s really cool to see it on the actual devices. It’s going to be such a great product for convention.”

As Annie Lentz ’20, director of communications for Mock Con 2020, familiarized herself with the convention, she ran into a whole lot of paper. “I was looking through the old pamphlet,” she said, “and I was like, ‘This is so wasteful.’”

Mock Con typically produces a 30-page program for each attendee at significant financial cost. To Lentz, replacing all that paper with an app also seemed an effective way to make the convention more sustainable, one of its strategic goals for 2020. But for Mock Con, a W&L tradition dating to 1908, the app would mark a substantial change.

Lentz brought her idea to Liam McCann ’20, Mock Con’s metadata manager and a computer science major, who assured her it could be done with the right team. He helped her interview interested student coders, testing their technical skills, enthusiasm and problem-solving abilities. Out of a substantial field of applicants, two stood out for their preparedness and ability to work independently. In spring 2019, Lentz and McCann hired Rob Hageboeck ’22 and Emily Roché ’20 to develop the app for iOS and Android.

When the team met that May for brainstorming sessions, they decided to push Lentz’s original concept further. “We were trying to figure out ticketing,” Lentz said, “and it’s always a nightmare. It’s usually paper tickets, and if you lose it, you don’t get to go in. There’s no list of people who have them.” 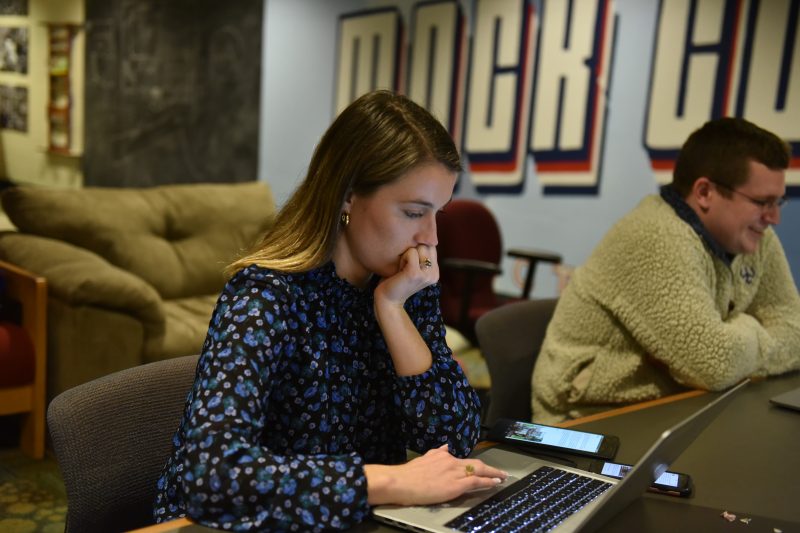 Emily Roché ’20 and Rob Hageboeck ’22 work on the app in the Mock Con war room.

They decided to move ticketing into the app. “That was a big jump,” said McCann. “You need to have authentication and all these different checks. But it also makes the app a lot more interesting, because it allows us to do ticketing in a way that’s never been done by Mock Con before.” The team also decided to add push notifications and provide live written updates and an event photo stream.

Over the summer, the app developers separated, with Hageboeck concentrating on the iOS version and Roché tackling the Android version. Hageboeck — so excited to join the team he sought interview help from W&L’s Career and Professional Development Office and built a prototype app — created a web server to handle back-end data like registration information. Roché, battling an Android development environment with less documentation than Hageboeck’s iOS one, tackled frustrating graphical problems and fought to make the Android app match the iOS version.

Faculty and staff at W&L helped Hageboeck nail down nitty-gritty details on server-side coding and Roché navigate the Android environment, but the two students worked largely independently. “This very much was just students,” McCann emphasized, noting that Hageboeck helped Roché better understand how the back-end system integrated with the app. “Really, they’ve been able to run with it.”

Development was not without setbacks, with the photo stream proving particularly challenging. “I didn’t expect it to be so much work on the back end,” said Hageboeck. “It required a number of scripting things that the server will take care of.” That and security needs meant the team had to accept a less responsive product than they wanted. “It pushes it from reacting in real time to more of a delayed approach,” he explained. “That delay that you get when you upload a Facebook post? That’s the delay that we’re going to have.”

For Roché, development was hamstrung by computer problems in October. “My computer just started spinning and refreshing, and it still hasn’t stopped,” she said. “I had to tell Annie that I lost everything. We started again, and I had some of it saved online, but that sucked. That really sucked.” Once she caught up, she continued to fight bizarre graphical bugs. “It was just funky. Some of the logos that we wanted to use went translucent. They were appearing different colors.”

The team communicated constantly and revised their road map to keep the app deliverable. Plans to integrate social media were abandoned. Hopes for a slick display of seating on the convention floor proved unworkable because the layout would be in flux until convention weekend. “Our eyes were bigger than our stomachs,” said Lentz, who hopes future generations of Mock Con will expand on what they leave behind. “There’s so much more that we just don’t have the time to do or the capacity for. Hopefully someone will have the vision.” 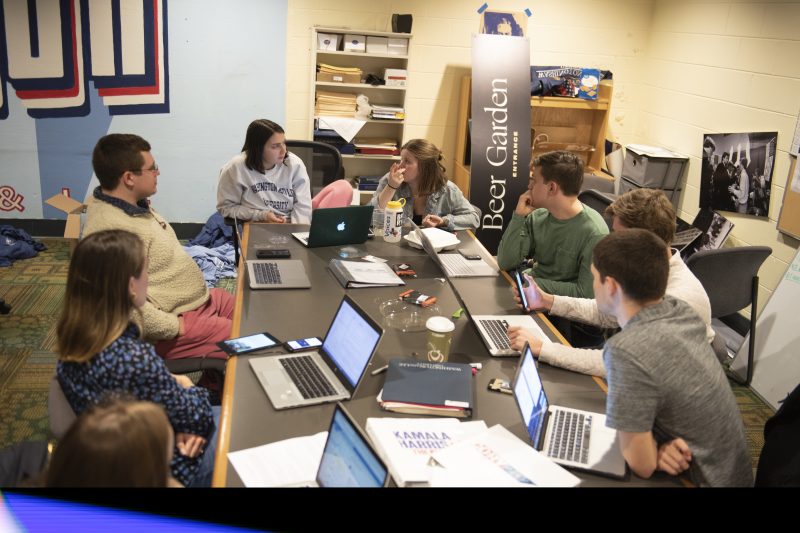 The Mock Con app team meets to hammer out details.

The team’s project will come to life on Feb. 14, when Mock Con 2020 begins. “It’ll be nice to see that all the hard work has paid off,” said Roché. For McCann, the thrill has already come. “It’s really cool to see it on the actual devices,” he said. “It’s going to be such a great product for convention.” Thousands of people will use the app, from attendees viewing schedules and speaker biographies to security personnel checking tickets with Hageboeck’s QR code scanner.

Creating the app has been an unforgettable learning experience. For Roché, a business and computer science major who will work in IBM’s cloud services division after graduation, it will be immediately applicable. Lentz found it an invaluable lesson in project management. And Hageboeck, the developers’ sophomore wunderkind, was coy when asked about his future. “I have a lot of different projects that I’m excited to work on after Mock Convention,” he said. “I can stay busy.”