“We wanted to figure out a way to do a piece that would educate people, teach people about the signs, and be able to celebrate the stories of healing of people who have been rescued.” 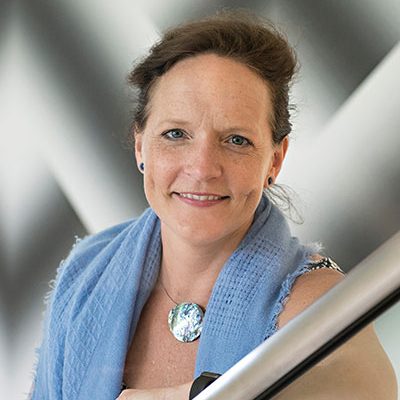 Washington and Lee University’s newest theater professor, Stephanie Sandberg, has nothing against fun, lighthearted productions. She will direct a humorous, contemporary adaptation of Jane Austen’s “Sense and Sensibility” on campus in December.

But many of the plays Sandberg has written in the past were more likely to make audiences squirm than smile. She has tackled such heavy topics as racism, faith, sexuality, and the plight of refugees, all in an effort to educate the community and inspire social change. In fact, her Michigan-based professional theater company, ADAPT., uses the motto “theatre that changes.”

The next production by ADAPT., “Stories in Blue,” will be no different. When it debuts next month at a huge international art competition in Grand Rapids, Michigan, called ArtPrize, it will tell the stories of six different victims of human sex trafficking. Over the course of a year and a half, Sandberg interviewed dozens of trafficking victims before settling on the half-dozen stories that will make up the piece.

“We wanted to figure out a way to do a piece that would educate people, teach people about the signs, and be able to celebrate the stories of healing of people who have been rescued,” Sandberg said.

Sandberg, who this fall will teach Global Cinema, University Theater, and History of Theater and Drama I, came to W&L from Calvin College in Grand Rapids, where she worked for 20 years. She grew up in West Africa and earned her Ph.D in theater from the University of California, Santa Barbara.

Her previous work includes “Lines: The Lived Experience of Race”; “Grains of Hope,” about refugees in Michigan; “Seven Passages,” about the intersection of sexuality and faith; and “Check your Privilege,” a piece of documentary theater based on interviews with students, staff and faculty at Western Michigan University.

Sandberg was inspired to write “Stories in Blue” after she was introduced to a sex trafficking survivor in Grand Rapids who was working to change how the crimes are prosecuted in Michigan. As she explored the topic, Sandberg learned that Michigan has the second-largest rate of sex trafficking in the U.S., owing to its waterways, the I-94 corridor and its position on the border with Canada.

In addition to the stories of five female survivors, the performance includes the experience of one transgender victim — a woman who was trafficked as a male prostitute out of the back of a van before she was rescued and was able to transition.

“Transgender youth are at particular risk because most of the time, they have been kicked out of their families, they’ve been ostracized by their culture, and they have been homeless and living in poverty,” she said.

Sandberg added that sex trafficking disproportionately affects people of color, a fact reflected in “Stories of Blue,” and that the play includes one international story about a young woman from Mexico who was sold into slavery by her stepfather. “Blue” is in the title because it is the color used by anti-human trafficking agencies around the world, and it also represents the coldness of the traffickers themselves and the sadness of the victims.

ArtPrize, which runs Sept. 21 through Oct. 9, is a competition, but Sandberg said that was not what motivated the theater company to debut the piece there. She said they learned from the Department of Homeland Security that human trafficking in Grand Rapids increases 400 percent during ArtPrize, so it presented a greater opportunity for education.

The performance itself will unfold as a pilgrimage that moves through the streets of Grand Rapids, beginning at sunset each day during ArtPrize and running through nightfall. At each of six stops along the way, professional actors will tell a different victim’s story in words and intonation. The procession will end at a permanent installation that will include video, photographs and educational materials. ADAPT. has invited the Department of Homeland Security and anti-trafficking agencies to send speakers for the occasion.

“With a piece like that, you want as many people to see it as possible,” Sandberg said. “People can always hear the stories. We will put them on our website and on our app so everybody has access to the stories, because it may be that you can only listen to a couple of these at a time. They’re pretty harrowing.”

As a researcher and writer, she said, she’s had to distance herself from the project at times to avoid a kind of secondary trauma that results from focusing on such disturbing material. She and the rest of the ADAPT. team have had to look out for each other to make sure nobody is overwhelmed by the sadness of the stories. Statistics show that many people who are trafficked survive only about seven years because they become addicted to drugs or fall victim to homicide or suicide.

After ArtPrize, ADAPT. would like to take “Stories in Blue” to locations outside Michigan. Sandberg said that although the crimes depicted occurred in Michigan, the company intentionally created a piece that would resonate anywhere.

Sandberg has left ADAPT. in the capable hands of a new director while she begins the next stage of her career. She feels she left the company in a good place, and joining the W&L community was an opportunity she could not resist.

“This is a very nice place to work,” she said, “and there is a lot of support for the arts. It just seems like the whole university is in love with supporting liberal arts ideas.”

Click here to read more about “Stories in Blue.”