Back on the Field Wiemi Douoguih '92 pursued two passions to find career satisfaction.

As much as Wiemi Douoguih ’92 wanted to be a doctor, he also wanted to stay close to his love of sports. 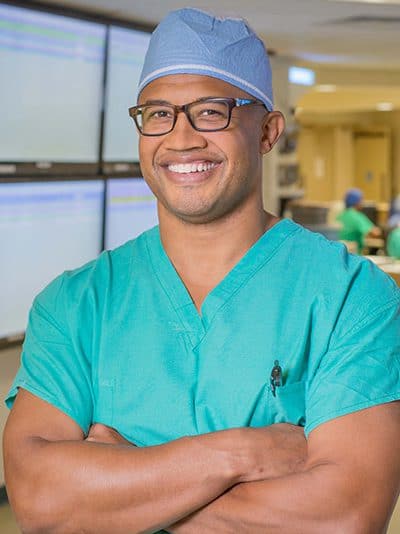 An All-American and ODAC Conference Player of the Year in lacrosse at Washington and Lee, Douoguih noticed that injured teammates were able to take some time off and return to play again. What happened to them during that interim period — being treated by doctors — made him realize that he could specialize in sports medicine and combine both of his passions.

Now an orthopedic surgeon, Douoguih has been the medical director for the Washington Nationals baseball franchise for the past seven years. Recently he added the same title with the Washington Wizards and Washington Capitals. In addition, he sees collegiate, high school, adolescent and professional and recreational athletes at his private practice at MedStar Orthopedic Institute at Washington Hospital Center.

After majoring in chemistry at W&L, Douoguih earned his medical degree at the Medical College of Virginia in Richmond and did his residency at Union Memorial Hospital in Baltimore. A fellowship in sports medicine and orthopedics at Kerlan-Jobe Orthopedic Clinic in Los Angeles, one of the world’s leading clinics in the diagnosis and treatment of sports medicine injuries and illnesses, “exposed me to athletes affiliated with the Dodgers, Angels, Kings (hockey), Galaxy (soccer), and USC Trojan football,” he said.

“I was exposed to the full gamut of sports medicine and also the nuances of dealing with management,” he said.

Prior to joining the Nationals, he was assistant team doctor for the Washington Redskins, where he worked under world-renowned senior consultant James Andrews. Recommendations from Andrews and Frank Jobe (a co-founder of the Kerlan-Jobe Orthopedic Clinic) led to his hire by the Nationals at age 34.

Douoguih is on site for about 70-75 percent of all Nationals’ home games, where he treats any injuries from both the home and away teams. At the ballpark, he has an office and treatment area, and he supervises the trainers, physical therapists, a chiropractor and the strength and conditioning specialists.

A specialist in elbow, shoulder and knee injuries, Douoguih said the most common injuries he sees are hamstring and oblique injuries and elbow injuries to pitchers that require “Tommy John” surgery, a reconstruction of the ulnar collateral ligament in the elbow. Douoguih is one of only five doctors who have performed three or more Tommy John surgeries on major league pitchers.

Following an injury to a player, Douoguih and his staff can recommend placing a player on the disabled list or “DL,” but the final decision is made by the general manager.

Douoguih came to W&L on an academic scholarship. A native of suburban New Jersey, Lexington was a bit of a culture shock to him, but after some adjustment, “I found it to be a special place that helped shape the rest of my life.”

His advisor in the chemistry department, William Watt, encouraged him in his quest to be a doctor and also to play lacrosse. “It was a challenge to do pre-med and play a varsity sport,” Douoguih said. “He encouraged me and gave me tips on study and discipline.”

He credits his lacrosse coach, Jim Stagnitta, with being “like a father away from home.” The coach “taught me life lessons that still serve me to this day.”

As a busy alumnus, Douoguih takes time to talk to W&L student athletes who are interested in medical careers. “I encourage them and sometimes write letters of recommendation” for them, he said.

He is living proof that medicine and sports do mix and that pursuing your dual passions can lead to success in a career.