Bridge Dedicated to W&L Veteran A bridge in Maryland has been named for Cpl. Chris Coffland ’88, who died in Afghanistan in 2009.

A crew mounted a sign dedicated to the memory of Army Cpl. Christopher Coffland ’88 on a Dulaney Valley Road bridge over Loch Raven Reservoir. (Photo courtesy of Catch a Lift Fund)

“Chris was a leader, not a follower.”

On Nov. 13, friends and family of Cpl. Christopher Coffland ’88, who was killed in Afghanistan by a roadside bomb on Nov. 13, 2009, will gather to dedicate a bridge across Loch Raven Reservoir on Dulaney Valley Road in his hometown of Timonium, Maryland.

His childhood friend, John Nozemack ’88, noted, “There’s a beautiful irony for me of Chris getting a bridge in Loch Raven Reservoir dedicated to him. Chris and I used to fish there quite a bit when we were little kids. It’s such a peaceful and tranquil spot, but also a place where we had some really good times. I’m glad it’s a spot where so many people who knew and loved Chris will get to see his name daily. This way, there is a constant reminder of our friend who lived by the courage of his convictions and bravely went off to fight injustice in the world so that those of us at home would be more safe and secure while being able to exercise our rights of freedom.” 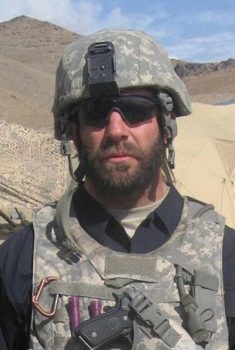 “Chris was a leader, not a follower,” added Jim Rallo ’88. “His entire life he took the path that he wanted, as he was never influenced by his friends or society. He was a person that led by example. After Sept. 11, he often talked about joining the military and serving his country and did so at age 41. He became the squad leader in basic training and was more physically fit than most of the younger guys. ‘Catch a lift’ was his favorite phrase while at W&L, as he was always headed to the gym to stay in shape for football or lacrosse. Chris was a friend, a leader and truly a Renaissance man.”

The signs at either end of the bridge went up in October. In an interview with the Baltimore Sun, Coffland’s sister, Lynn, said, “It was a really humbling moment to see my brother’s name be put on a sign that I know will be there for as long as that bridge exists.”

The bridge dedication was spearheaded by the Catch A Lift Fund, a nonprofit founded by Lynn Coffland a year after her brother’s death. The Timonium-based organization provides fitness grants and mentorship to veterans to help them acclimate to civilian life.

Veterans who have benefited from the nonprofit were instrumental in helping to prepare the application and petition for the Maryland State Highway Administration’s approval.

Rob Fessock, a 16-year retired Army veteran who credits Catch a Lift’s programming with his recovery, said, “Every civilian and military member that crosses that bridge knows that he served his nation and made the ultimate sacrifice.”

You can read more about Coffland’s accomplishments here.

Washington and Lee will honor veterans with a brief ceremony on Nov. 12 at 9:30 a.m. in front of Lee Chapel.

In addition, on Sunday, Nov. 11, W&L will toll the Lee Chapel bells at 11 a.m. as part of the United States World War One Centennial Commission’s “Bells of Peace: A World War I Remembrance” event. This national bell-tolling event honors the centennial of the armistice and the 4.5 million Americans who served and sacrificed in World War One.