Aria Allan ’12, ’16L grew up in Montgomery, Alabama and attended Washington and Lee University for her undergraduate studies in Spanish and English Literature. At W&L Law, Aria served as the Executive Editor of the German Law Journal and as Vice Chair of the Moot Court Executive Board and is a member of Omicron Delta Kappa. After graduation, she will clerk for the Honorable Callie V. S. “Ginny” Granade of the U.S. District Court for the Southern District of Alabama, and for the 2017-2018 term, she will clerk for the Honorable Joel F. Dubina of the Court of Appeals for the Eleventh Circuit. 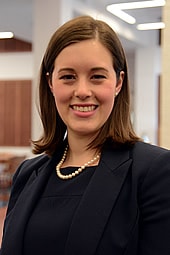 First, I will be clerking for Judge Callie “Ginny” Granade in the Southern District of Alabama in Mobile. I will be one of three term clerks in chambers, and along with the career clerk, I will review cases, draft bench memos, opinions, and orders, and will assist Judge Granade on the bench. Judge Granade rules on a wide variety of cases, from criminal law to civil law, including complex torts and contract claims, admiralty law, and everything in between.   For the 2017-2018 term, I will clerk for Judge Joel Dubina on the Eleventh Circuit Court of Appeals. On the appellate level, I will work with Judge Dubina’s other clerks to prepare for oral argument by submitting bench memoranda to the judge; after oral arguments, I will draft either published or per curiam opinions, depending on the panel’s decision. The Eleventh Circuit hears all appeals from the federal district courts in Alabama, Georgia, and Florida.

I have always been drawn to the research and writing aspect of my academic career. I first clerked for Judge Dubina during my 1L summer, and the wide variety of cases that came into chambers was appealing to me because it allowed me to explore so many discrete areas of law. In addition, it’s the perfect experience to continue honing legal writing skills and to learn how to be an advocate, not because you are advocating but because you are watching and learning how those decisions are made by judges.

I worked closely with the Clerkship Committee to target my applications to judges in a geographical region. Professor Seaman made sure that Judge Granade was on my short list, as she has hired W&L graduates in the past and because her husband, a practicing attorney in the Mobile area, is also a W&L Law alumnus. It also helped that I was born and raised in Alabama and had the geographic connection to the area. I submitted my materials once Judge Granade’s application window opened, and she asked me to interview in chambers.  Judge Dubina, whom I am lucky enough to call a mentor, had already taught me so much during my summer clerkship with him. After he found out about my clerkship with Judge Granade, he asked me to submit my application to his chambers for the following term. He called me about a week later with the offer, and I accepted on the spot.

It’s hard to chose only one or two classes, as so many of W&L Law’s offerings directly helped me prepare for working in chambers. Constitutional Law is one of the most helpful courses, but I think W&L Law’s Third Year experience is the best preparation for my clerkships. In my third year, I clerked for Judge G. Steven Agee on the Fourth Circuit Court of Appeals, and the type of work I did for Judge Agee will be the same type of work I will do for Judge Dubina. Even though it is not direct experience in the district court setting, it was an incredible opportunity to review opinions and orders issued by district courts and to see how those issuances were treated by a reviewing court.

Clerking is an unparalleled opportunity to observe effective advocacy, both in written and oral form. In my two years of clerking, I will get to see excellent advocates, unskilled advocates, and everything in between. This experience will be invaluable to me as a practicing attorney. Although I would love to work at a firm for a while, I am also considering looking for a position as a career clerk, and having term clerkship experience will be necessary if I select that career path.

What are you most looking forward to about this clerkship position?   There are so many incredible aspects of clerking, but one of the most important is the mentor relationship you build with your judge. I am truly looking forward to learning from Judge Granade and Judge Dubina, as they both have had awe-inspiring legal careers (Judge Granade has a criminal background, while Judge Dubina worked as a civil litigator before joining the bench).

What are your plans after your clerkship?

After my clerkship with Judge Dubina ends, I am planning to join Smith, Currie, & Hancock, a mid-sized law firm in Atlanta, Georgia focusing on construction law and government contracts.