Babatunde Cadmus ’15L attended college at the University of Delaware and received a Bachelor’s degree in Criminal Justice and Sociology. At W&L Law, he served as editor in chief of the Journal of Civil Rights and Social Justice during the 2014-2015 school year.  This past year, he spent a significant portion of his time representing indigent clients in misdemeanor cases through the Criminal Justice Clinic.  Upon graduation, he will join the law firm of Pepper Hamilton in Philadelphia as an associate. 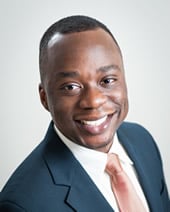 I will be working at the Philadelphia office of Pepper Hamilton LLP.  I don’t know which practice area I will be placed in yet.

No.  I actually came to law school wanting to go into criminal defense, as I was a Criminal Justice major in college.  But classes like Contracts, Civil Procedure, CBA and Publicly Held exposed me to the civil law side, and I developed an interest in civil litigation and business law.  I knew that big law firms generally do this kind of work, so I pursued that career.

What classes do you think are helpful to take to prepare for a BigLaw job, and when would you recommend taking them?

First year courses like Civil Procedure, Contracts, Torts and APLP are all helpful.  I would also recommend taking CBA, and Publicly Held during the 2L year.  If someone is interested in a specific niche of business law, such as bankruptcy, corporate taxation, or antitrust, I would recommend taking those courses as well.

After my 2L year, I interviewed for my summer position with Pepper Hamilton through W&L’s summer regional interview program in Charlottesville.  I generally applied broadly, but restricted my geographical area to the mid-Atlantic region.  In addition to the school’s regional interview program, I applied to firms through OCI and various job fairs and interview programs not affiliated with W&L.  I generally applied to firms that had at least a few W&L alumni as attorneys.  I also targeted firms with large and reputable litigation departments.  I started the process of applying to law firms-which began with perfecting my resume and cover letters-in December of my 1L year.  After that, I kept applying to different firms all through the spring semester and during the summer.