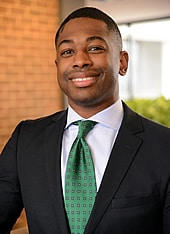 I will be clerking for U.S. District Judge Madeline H. Haikala of the Northern DIstrict of Alabama. She presides primarily in Birmingham, though she also handles cases in Huntsville. My responsibilities will include researching, writing, making recommendations, and helping to manage chambers.

I am interested in clerking because of its profound benefits. There is no comparable opportunity, as I understand, where an attorney, new or experienced, is able to spend an entire year or more perfecting writing, observing good lawyering (as well as poor advocacy), and being under the wing of a judge.

I developed an early interest in clerking while at W&L. Thus, I was strategically thoughtful about classes and experiences in which I engaged. After carefully preparing my application over several months during my second year of law school, I submitted it, interviewed, and was offered the clerkship over the telephone.

Although I credit several experiences, I primarily attribute two for my successfully securing a federal clerkship: first, in taking three classes with Professor Massie, she helped me significantly strengthen my legal writing. She met frequently with me, where she engaged in line-by-line critiques of my writings, and she did not shy away from being critical. Developing a relationship with Professor Massie was essential to being competitive for the clerkship process. Second, my participation in various school-wide, regional, and national moot court competitions–where a student bears the task of taking an appellate case from start to finish–improved my written and oral advocacy. Arguing before U.S. Supreme Court Justice Samuel Alito in W&L’s moot court competition this past year certainly makes for a wonderful clerkship interview story.

First, if I choose to apply for federal circuit clerkships, I believe my district clerkship will no doubt prepare me. As for private practice, I suspect clerking will enable me to enter the profession a better attorney than I otherwise would have, as I will have spent an entire year getting an insider’s view of the judicial process. Likewise, the prestige with which a federal clerkship typically carries for one’s entire legal career is quite extraordinary.

Principally, I am looking forward to spending a year improving my writing, which I imagine will nonetheless be a lifelong endeavor. In addition, my judge is a terrific person, not to mention an incredible legal thinker; as a result, I welcome engaging in a strong, supportive mentoring relationship with my judge.