Mac Mackie ’15L is from Charlotte, N.C. originally and received his Bachelor’s degree from the University of North Carolina at Chapel Hill. Between undergrad and law school, he worked in the publishing industry as an editor and then a literary agent. He is married to Parker Mackie, his obsessions include Tar Heel basketball and Sherlock Holmes, and he looks forward to moving to Washington, D.C. next year. 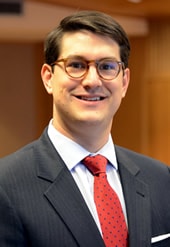 I will be working at Covington & Burling LLP in their Washington, D.C. office. While Covington does not require a commitment to particular practice groups, I hope to practice within the areas of commercial litigation and international arbitration.

I harbored no aspirations to work for a big law firm coming into law school; to the contrary, I could never have even imagined it. I had been working in the publishing industry and assumed that that is where I would stay after law school, only with a more legal role within the industry.

What happened during law school that changed your mind?

I realized almost immediately after entering law school that the core skills that are inherent to a good lawyer (specifically a litigator) are similar to those that attracted me to publishing in the first place: an analytical eye applied to the written word, rhetoric and persuasiveness, the ability to gauge what will please a particular audience, and simple communication skills in general. Honing those skills during my 1L year only reinforced that realization, at which point I began to actually like how those skills applied to lawyering better than they applied to publishing. In other words, much to my surprise, I found being a lawyer to be more enjoyable and intellectually challenging than anything I had done previously. For me it was simply a matter of personal fulfillment and enjoyment – for whatever reason, I thoroughly enjoy the law, its application to everyday and real problems, and, when compared to publishing, can imagine myself thriving in the professional legal atmosphere more readily than the publishing environment.

What classes do you think are helpful to take to prepare for a BigLaw job, and when would you recommend taking them?

Personally, the classes most helpful for me have been those that have focused on researching and writing. I believe I observed the biggest separation between W&L students and students from other law schools to be in the ability to quickly and thoroughly research a topic and narrow down those issues that matter. In that respect, my legal writing classes prepared me in a similar manner; thanks to those classes, I was able to communicate (or at least I like to think that I was able to communicate) that research effectively and succinctly. At the end of the day, those are the skills that, I believe, carried me the farthest.

As to what classes I think are most helpful for general “BigLaw” jobs, I think the answer to that question depends entirely on the practice area in which the student is interested. For example, Federal Courts and Jurisdiction or Conflicts of Law would be beneficial to those interested in litigation, whereas Close Business Arrangements and Securities Regulation would be more beneficial to one interested in transactional work. I took a healthy balance of those two types of classes as early as possible so that I could figure out for myself what I thought I enjoyed more and what area seemed more amenable to my particular strengths and weaknesses.

I applied very broadly because of the relative volatility of the legal market in recent years.  That said, I generally applied only to firms with strong litigation departments because I had narrowed my focus at least that much by the time I had begun applying. If a firm had a strong international practice, it certainly piqued my interest even more, but I did not allow that factor to restrict my approach. In talking with a number of successful attorneys during the application and feeling-out process, one theme continued to reinforce itself: many of the most successful people I spoke with never intended to enter and never considered the practice of the type of law they ended up specializing in. So, I approached the process with a very open mind, trying not to rule too much out for fear of making a wrong decision based on insufficient information.

As for timing, I affirmed my aspirations for “BigLaw” only by the end of my 1L year. While that may sound early, many come into law school knowing that’s what they want to do and start tailoring their experiences towards that end from the outset. I was not one of those people. Luckily, however, I did come to that conclusion by the end of my 1L year – I say “luckily” because that is when applications start rolling out for the bigger firms. By the time I had barely started my 1L summer internship with a judge, I think I had most of my applications in for interviews with 2L summer firms that had signed up for W&L’s on-campus or on-location interview programs. I continued to apply to other firms throughout the summer after my 1L year that had not elected to be a part of those programs, but the interview programs arranged through W&L ended up yielding a number of results for me before I heard back from those ad hoc applications. I was fortunate enough to have a 2L summer associateship lined up with Covington right about when our 2L classes started.

The decision to work at Covington was based largely on my gut. At the time, I told myself I focused on three primary factors: (1) geographic location, (2) practice strengths, and (3) the people/culture. But looking back, I think the decision may have boiled down to instincts more than anything else. Of course, those instincts incorporated those three categories, but I really just asked myself where, after meeting all of the people, seeing the offices, and doing as much research as possible, I thought that I, personally, would be the happiest. After spending a summer there, I have no doubt that I made the right choice for me. So, my final advice for anyone going through the same decision process would be to ignore the outside voices, commentators, and critics, and to just do what you think will make you the happiest and most successful, always keeping in mind that each person has a different definition of what it means to be “successful.”