Nigel Wheeler ’15L is a third year student at Washington and Lee Law. He has worked as a broadcast journalist, played with an internationally-touring rock band, and has volunteered for several years at the Family Place, a domestic violence shelter. He is headed to Dallas to do real estate law at Bracewell and Giuliani. 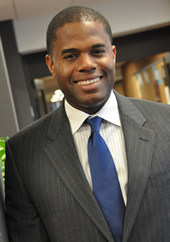 I will be working at the Dallas, TX office of Bracewell and Giuliani. My main practice area will be real estate, but I will also spend time in the public finance and corporate securities groups.

Not really. I came into law school with an open mind about what I ultimately wanted to do. In the summer prior to my 1L year, I met with some incredible Washington and Lee alums who told me a lot about firm life. It sounded like a solid career path. Their advice coupled with a great opportunity during my 1L summer was ultimately what propelled me into the law firm track.

What experiences during law school helped you make up your mind about a career path?

My experience as a summer associate at Bracewell is what ultimately solidified my desire to work at a large law firm. Even as a summer associate, I received tremendous advice on how to be an effective and successful lawyer. I also really liked the people I was working under and realized it was the type of environment that would help me grow and learn as an attorney.

What classes do you think are helpful to take to prepare for a Big Law job, and when would you recommend taking them?

My search process began before law school even started. I started meeting with W&L alumni during the spring before I entered law school.

I decided on Bracewell after spending two great summers there. The work was incredibly difficult at times, but because of the spirit of mentorship that is fostered at Bracewell, I never felt overwhelmed. The firm’s social events really hammered home my desire to work there because the events were a lot of fun and allowed me to interact with the firm’s lawyers in a social context.

I knew I wanted to go to Dallas even before I entered law school. I have a strong friend base there and have invested a lot of time with civic organizations in the area. Additionally, Dallas is one of a handful of cities where salaries are high and the cost of living is reasonable. There is also a growing alumni base in Dallas and I have a feeling it will expand significantly over the next decade.