CEO of the American Civil War Museum Gives 2019 Founders Day Address Coleman's talk, “In Times Like These: Responsive and Responsible Leadership,” can be viewed in full online. 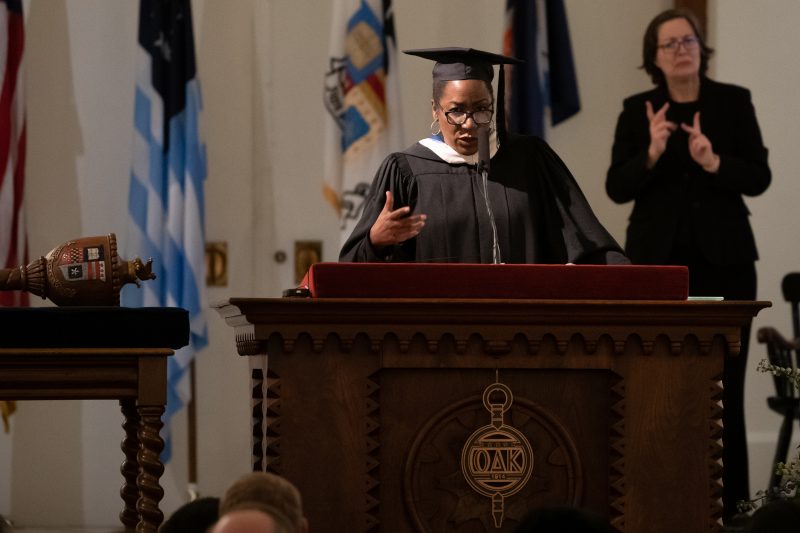 Christy Coleman, CEO of the American Civil War Museum, was the featured speaker at Washington and Lee University’s Founders Day/Omicron Delta Kappa Convocation on Jan. 22 in Lee Chapel. The event can be watched in full here.

The title of her talk, which was free and open to the public, was “In Times Like These: Responsive and Responsible Leadership.”

“Christy Coleman is a national leader in the contested debates about how we interrogate, engage with and understand the constantly changing terrain of history,” said W&L Provost Marc Conner. “The challenges she has faced at the Civil War Museum are quite similar to what W&L faces and what many institutions face—indeed what the nation faces—in coming to grips with our historical past. Having her speak on Founders Day is the perfect opportunity for us to continue to engage with the hard realities of history.”

Coleman grew up in Williamsburg, Virginia, and earned her bachelor’s and master’s degrees from Hampton University. In her role as CEO of the museum, she has furthered discussion around the Civil War, its legacies and its relevance to lives today, not only in the Richmond region but around the nation.

Coleman began her career at the Colonial Williamsburg Foundation, where she ultimately served as director of historic programs, managing programming and tours in the historic area.  In 1999, she left to become president and CEO of the Charles H. Wright Museum of African American History in Detroit, Michigan. In 2008, Coleman was named president and CEO of the American Civil War Center at Historic Tredegar (ACWC). In 2013 she helped orchestrate the merger of ACWC with the Museum of the Confederacy to create the American Civil War Museum.

Coleman has been featured in multiple media outlets, including the Washington Post, the New York Times, the Wall Street Journal, NBC news, Al Jazeera English Channel, NPR’s “All Things Considered,” the podcast “Uncivil”  and “Matter of Fact” with Soledad O’Brien. Coleman was also on Time’s 2018 list of “31 People Changing the South.”