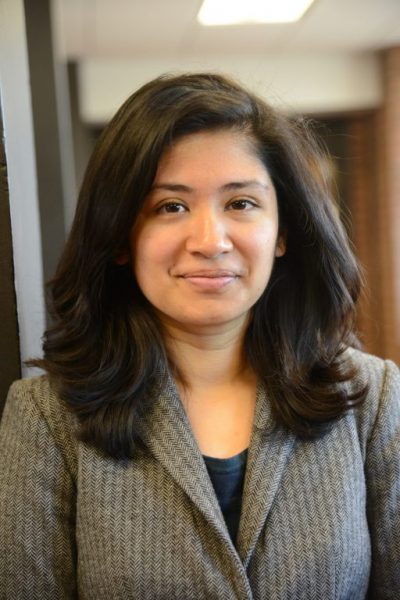 The Virginia State Bar has named Washington and Lee University law student Charu Kulkarni, a member of the Law Class of 2018, as the recipient of the Oliver White Hill Law Student Pro Bono Award.

The Virginia State Bar created the award in 2002 to honor extraordinary law student achievement and commitment to uncompensated or minimally compensated pro bono work and public service. Kulkarni is the fifth W&L Law student to win the award.

From the beginning of her law school career, Kulkarni was focused on the goal of serving the public interest by advocating for the underrepresented and powerless. Growing up she witnessed how corruption plagued the Indian government, and that the most vulnerable populations suffered the most from police abuse of power. And as Kulkarni wrote in her application to W&L’s clinical program, there are similar challenges in the U.S. justice system.

“The system is constantly plagued at its core by problems of social justice that may be beyond its scope to fully resolve. In my career as a lawyer, I wish to do everything I can to increase fairness and justice within the system.”

Kulkarni spent her 1L summer as a domestic relations intern at the Atlanta Legal Aid Society, where she appeared in Fulton County Superior Court and successfully argued a case to grant a temporary protective order for a domestic violence survivor. Later that summer, she worked for Greater Boston Legal Services in their immigration unit researching asylum law and working with clients seeking asylum in the U.S.

She spent her 2L summer as a law clerk with the Virginia Capital Representation Resource Center, where she logged 486 hours of pro bono service doing legal research and factual investigation for clients. A particular focus was developing and presenting a campaign for executive clemency on behalf of a man whose crime was the result of severe mental illness.

During her 3L year, Kulkarni has served as a student attorney in the Virginia Capital Case Clearinghouse, the death penalty defense clinic at W&L Law. There she helped launch the clinic’s new pro bono project, providing representation to an aging cohort of Virginia prison inmates who remain parole-eligible because they were sentenced before the state abolished parole in 1995.

“Charu immediately assumed leadership of this new effort,” said David Bruck, professor and director of the clinic. “In addition to representing her assigned clients, Charu took on the extra burden of developing a manual for those navigating this unfamiliar and little-know area of administrative law. Her work will serve as a guide to Virginia parole practice and procedure for future law students and lawyers for years to come.”

In her work on the parole project, Kulkarni also achieved the first success of this new initiative, winning parole for a 70-year-old man who had served 40 years in prison with virtually no disciplinary infractions. Her work included visits to the client’s family’s home to document his release plan and an innovative written submission to the Parole Board detailing the strong family and community support her client would receive upon release.

In addition to her strong commitment to pro bono service, Kulkarni has been very active in the law school community. She is a member of the Black Law Students Association, serving as the organization’s historian and also as a member of its mock trial team. In addition, she served as Vice President for Community Service for the Public Interest Law Students’ Association and as a senior articles editor for the German Law Journal.

Not surprisingly, Kulkarni’s plans after graduation involve a career in indigent criminal defense. She has accepted a position as an assistant public defender with the Defender Association of Philadelphia beginning later this year.

The Virginia State Bar’s pro bono award is named in honor of Oliver White Hill, a life-long civil rights activist and attorney. He was one of five lawyers who argued the 1954 Brown v. Board of Education decision in which the U.S. Supreme Court ruled that segregated schools were unconstitutional. Mr. Hill spent his childhood years in Roanoke, Virginia and started his law practice there in 1934. Among his many honors, in 2000 Mr. Hill received an honorary doctor of laws degree from Washington and Lee. He died at the age of 100 in August 2007.