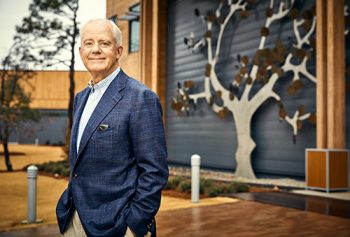 James “Chip” Mahan III, a 1973 graduate of Washington and Lee University, was named the 2017 Distinguished Citizen of the Year by the University of North Carolina at Wilmington during its homecoming.

Chip, the founder, CEO and chairman of the board of directors of Live Oak Bank, received the award for his outstanding professional achievement and personal commitment to community engagement.

His résumé includes serving as CEO of S1 Corp., which became the first internet bank and grew into a $234 million software and services provider. Earlier in his career, he launched Cardinal Bancshares, was chairman and CEO of Citizens Union National Bank & Trust Co., and formed an investment group that purchased Citizens Union.

In the Wilmington area, Chip is noted for his numerous humanitarian and community activities. In 2014, he received the Lower Cape Fear Stewardship Development Award for Outstanding Stewardship for creating a superior workplace environment, while preserving the longleaf pines and live oaks growing on the site.