Climate Change and Sharks As a research assistant at the Virginia Institute of Marine Science, Rachel Steffen ’18 gathered data on the environmental thresholds of juvenile sandbar sharks.

“It takes a lot of hard work, passion, reading and creativity to become a successful scientist.” 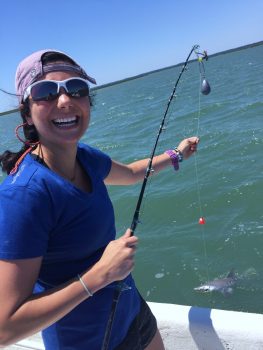 Q: Tell us your summer opportunity.

I had the privilege of working at the Virginia Institute of Marine Science (VIMS) Eastern Shore Lab, as a research assistant to Ph.D. student Dan Crear. Dan is researching the effects of climate change, such as warming and decreased oxygen, on juvenile sandbar sharks.

Carbon dioxide in the atmosphere prevents the loss of energy (in the form of heat) from leaving the earth. In addition, this heat is absorbed by the ocean and, in turn, decreases the ocean’s ability to hold oxygen. An increase in water temperature often causes an increase in a shark’s oxygen consumption and metabolic rate. Therefore, at higher temperatures, a shark has a high oxygen demand, but is in an environment with less oxygen in the water. However, these environmental thresholds are unknown for many marine species.

Using a respirometer, we can determine the effects of warming and decreased oxygen on the oxygen consumption and behavior of juvenile sandbar sharks. Sandbar sharks are apex predators at the marshy Eastern Shore, as well as many other parts of the world. A change in their population density and distribution would cause a domino effect, cascading down all levels of the food chain. The goal of this research is to predict the future behavior and movement of these sharks.

Q: What has been your favorite aspect of your location?

VIMS Eastern Shore Lab is located in lovely Wachapreague, Virginia. With a population of roughly 200 residents, it isn’t exactly a bustling city, so there is little to do outside the lab. However, this allowed me to get to know the other students and professors at VIMS. There were 11 of us (undergrads, grad students, and professors) that lived in the three houses on the VIMS Eastern Shore Lab campus. They are all wonderful, brilliant, fascinating people, and I learned so much from all of them. 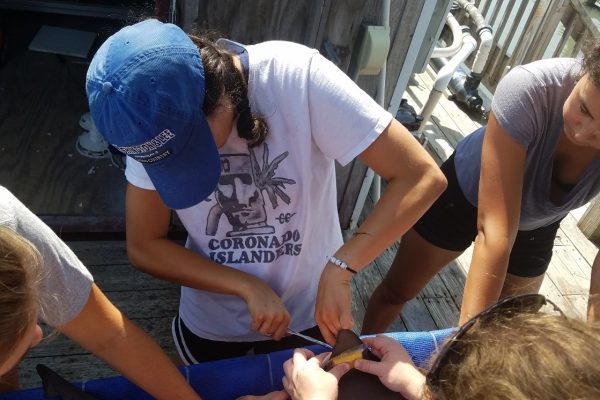 Securing the accelerometer onto a shark’s dorsal fin

Q: What did an average day for you look like?

Every morning began with a 7:30 a.m. breakfast meeting on the front porch of King House. While chowing down on cereal (we went through a lot of Kashi), we discussed the plan for the day. Although everybody had their own projects, there was a lot of collaboration among research groups, so it was helpful for everyone to be on the same page.

Before we started our respirometry trials, a lot of preparation was needed. This included scrubbing shark slime off the tank and pumps, dipping the accelerometer in liquid plastic (to waterproof it), calibrating oxygen probes, and hauling around a large battery. To begin the trial, we first fished out the correct shark from the holding tank, and secured the accelerometer onto its dorsal fin without losing any of our fingers. The accelerometer is used to record the shark’s movements and speed throughout the trial. Then, either Dan or I ran the shark to the respirometer tank. After the shark was settled in the respirometer, we started recording data (with the help of several computer programs and oxygen probes).

Once the trial was started, and we’ve examined who got the worst of the “shark burn” (shark skin is about the same texture as sand paper), there wasn’t much else to do except check in on the shark for the rest of the day. I used this downtime to work on my main contribution to the experiment. We recorded every trial in order to understand shark behavior under the different environmental experiments. To measure this, I watched each video twice, first timing the laps to get the average speed (body lengths per second) and then again to count the number of turns they make. Watching sharks swim in circles all day was a bit tedious, but hopefully the data I collected will benefit the experiment.

The second day of every trial was a bit more stressful because on that day we brought down the oxygen. Before breakfast, we turned on a big nitrogen tank and used computer software to control the flow of nitrogen into the respirometer, which in turn reduces the oxygen saturation in the water. We continued to bring down the oxygen throughout the day, while carefully monitoring the shark’s metabolic rate and behavior. Once the metabolic rate dropped, we assumed that the shark had reached its critical oxygen saturation (Scrit) at that temperature. Once this occurred, the trial was over. We brought the tank back up to 100 percent oxygen saturation and then ran the shark back over to the holding tank, reuniting him with his shark friends.

Because respirometry is hard work, it really built up an appetite — for both me and the sharks. Every three days I got to pretend I was sushi chef and cut up 35-55 menhaden, known locally as “bunker,” to feed to the sharks. I apologize if I still smell like dead fish.

Every day was exhausting to say the least, but I woke up excited about the project and thankful for the opportunity to be a part of it.

Q: What was the most rewarding part of the experience?

Not only did this experience bring me one step closer to achieving my goal of becoming a marine biologist, but I also got to help Dan collect data for his Ph.D dissertation and helped to unveil some of the consequences of climate change.

A few weeks ago, I was left in charge of running trials while Dan attended a conference. There are 100 little things that must be done for a trial to run smoothly, and even then, things inevitably go wrong. Although there were a few hiccups along the way, I managed to complete both trials, collect all the data we needed, and keep both sharks alive.

Q: Who served as a mentor to you, and what did they teach you?

The graduate students, Dan, Gail and Maggie, taught me more about grad school, grant applications, marine biology and life in general than I could have ever asked for. It was a tremendous honor to work with Dr. Brill and Dr. Bushnell. They taught me that it takes a lot of hard work, passion, reading and creativity to become a successful scientist.

Q: What have you learned at W&L that helped you in this endeavor, and what did you bring back to your life on campus?

Through my experience in field classes (Dr. Marsh’s field herpetology class and Dr. Hamilton’s Yellowstone ecology class), I felt prepared to work with live animals, solve problems, follow protocol, and respect the scientific method. Dr. Cabe’s 300-level seminar also prepared me to read scientific papers efficiently and effectively, which has proven to be a very useful skill, allowing me to understand what I am doing, why I am doing it, and what similar work has been done in the past. Dr. Marsh’s biostats class is one I recommend to all science majors. I have come to realize that understanding the basics of scientific statistics and learning computer programming are invaluable, if not necessary, skills in just about every field of science. I returned to W&L with a renewed determination to achieve my goals.

Q: Did this experience impact your studies or future plans in any way?

I came to W&L with an interest in biology and seemed to be whisked onto the premed track. In September of my junior year, with the MCAT and med school applications fast approaching, I found myself in somewhat of a panic. I realized I had more anxiety than excitement at the thought of becoming a doctor. I scheduled an emergency life reevaluation meeting with my advisor, Dr. Hamilton. He calmed me down and made me realize I had both the time and the means to explore other options. This got me thinking about what I was passionate about. In the summer of 2015, I had worked for the Navy Marine Mammal Program and absolutely loved it. Growing up a Navy brat, I moved around a lot but always lived next to the ocean, so for me the ocean feels like home. I’m not sure why I had never considered a career in marine biology before, but suddenly it seemed like the most obvious option. I contacted Dr. Humston, W&L’s resident marine biologist, and explained that I thought this whole marine science thing was something I might be interested in. It was as if a weight had been lifted off my shoulders, and I became excited and passionate about what my future could hold. However, I had no idea what my next steps should be or even what the life of a marine biologist looked like.

Dr. Humston knew exactly where to send me. VIMS is like marine science boot camp, and working there confirmed that marine biology is the field I would like to continue to pursue. I quickly realized the life of a marine biologist is far from simple or relaxing. Depending on what their project entails they have to also be fishermen, plumbers, electricians, chemists, vets, statisticians, writers and public speakers. Each day presents new challenges and problems that need to be solved. As a kid, I would wander the neighborhood looking for mystery and adventure. At VIMS, I realized that the ocean holds all the mystery and adventure I could ever want.

Q: Why is this kind of experience important to W&L students?

W&L students know how to put their nose to the grindstone to reach their goals, but I think without passion and direction it is easy to burn out. An opportunity like mine, which allowed me to have an immersive experience in a field I was interested in, fueled my passion and further refined my chosen direction.

Q: What kind of funding helped make this experience possible?

I received both a Johnson Opportunity Grant, and a grant from the environmental studies department. I am incredibly honored and grateful to have received these grants.