Commander Schlegel’s Legacy The Schlegel Scholarship, established in memory of Commander Robert A. Schlegel '85, who died at the Pentagon on 9/11, has supported 26 students at W&L. 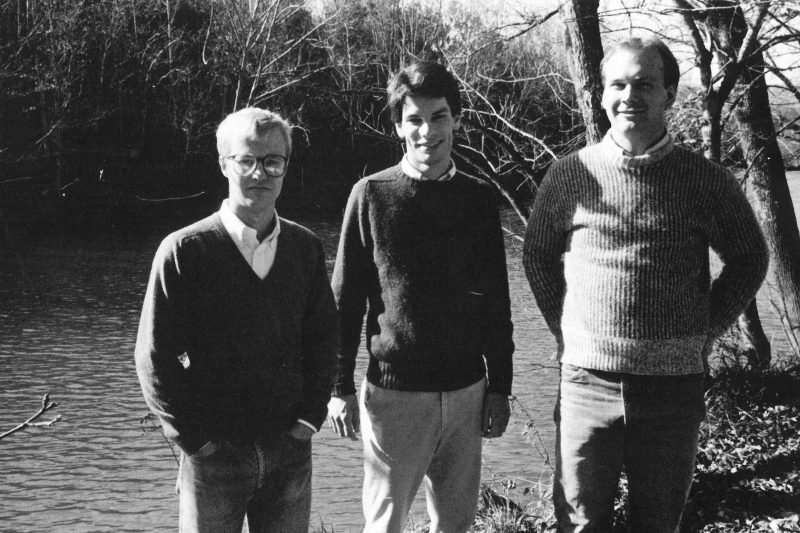 “Hopefully those of us who have benefited from the Schlegel fund can continue to make a small contribution towards building a more peaceful future.”

Commander Robert A. Schlegel ’85 packed a lot of impact into his life before it was tragically cut short in the terrorist attacks on Sept. 11, 2001. Although nothing could fully ease the pain of that loss, it may comfort those who cared about Schlegel to know that two decades after his death, he continues to positively influence his country,  his alma mater, and the lives of young people.

For 14 years, Schlegel served a number of duty stations in Norfolk, including assignments aboard the USS Spartanburg County, the USS Harry E. Yarwell and the USS Scott, as well as at the Fleet Combat Training Command, Atlantic, and in the office of the Commander in Chief, U.S. Atlantic Fleet. He was the executive officer aboard the USS Arthur W. Radford from May 1999 to September 2000, then was transferred to the Pentagon to serve on the staff of the Chief of Naval Operations, earning the rank of commander in August 2001. He was killed at the Pentagon on Sept. 11, 2001, when American Airlines Flight 77 crashed into the building at 9:37 a.m.

In 2002, Schlegel’s fraternity brothers spearheaded a fundraising campaign to support a scholarship in his name at W&L. The Schlegel Scholarship allows W&L students to participate in foreign affairs conferences, including the Student Conference on United States Affairs (SCUSA) at the U.S. Military Academy (West Point) in New York and the Naval Academy Foreign Affairs Conference (NAFAC) in Annapolis, Maryland. In addition, the Schlegel Prize was established for the best paper on foreign affairs or international relations in a given academic year, and the scholarship supports student research projects related to international affairs. 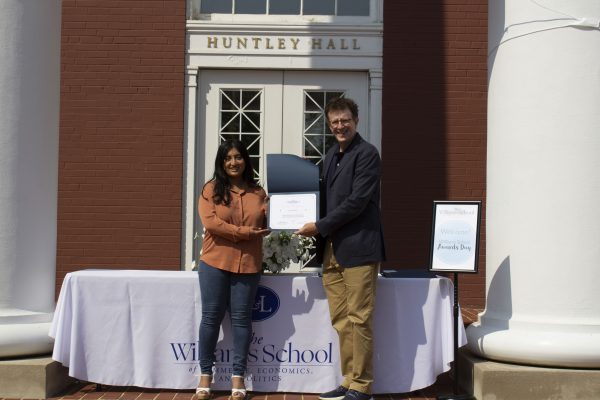 Since its inception, the Schlegel Scholarship has contributed to the educational experience of 26 W&L students, a full list of whom can be seen here. Former recipients are effusive in their praise of the prize and the opportunities it provided for them.

“As a teacher and debate coach, attending SCUSA gave me a hands-on, real-world experience in policy making,” said Kayla Sylvester ’17. “This has given me a wider perspective while helping my debate students think critically about a wide variety of domestic and international topics.”

Mary Holloway ’06 received the scholarship in 2006 and used it to attend the 2006 Danish Atlantic Youth Seminar as part of a delegation of six Americans selected by the Atlantic Council of the U.S. The week-long international conference, which takes place annually, is put on by the Danish Atlantic Treaty Organisation and co-sponsored by NATO, with the intent to inform generations of the post-Cold War era of security issues facing NATO countries and their interests.

Holloway, who would go on to work for the National Security Council at the White House, had this to say about her experience:

“The Schlegel Prize allowed me to travel to Denmark and interact directly with my international peers on a range of European and global security challenges. It enhanced my W&L international relations education by exposing me to new perspectives and to thinking about international challenges in new ways.

Since my graduation from W&L in 2006 and my Schlegel Prize conference, I have dedicated my career to national security. Fellow alum Sen. John Warner provided me with my first job in the United States Senate, and from there I went on to work for the Department of Defense as a counterterrorism analyst — a career path impacted directly by the events of 9/11, which is the reason the Schlegel Prize exists.

Most recently, I served as a director at the National Security Council at the White House and had the opportunity to steer programs addressing today’s current security threats faced by the United States. In conjunction with fellow alums, I have hosted Washington Term students at the White House and mentored those who reach out to learn more about careers in national security.

The Schlegel Prize played a role in where I have gone in my career and reminds me to continue to help our W&L students achieve similar careers.”

Jack Anderson ’16 used his Schlegel Scholarship to participate in the SCUSA, but also to do undergraduate thesis research in Central Asia. He spent time in Kyrgyzstan researching a possible Kyrgyz-Uzbek conflict over natural resources. In a recent communication, Anderson reflected on the opportunity’s impact on him and his future:

“Growing up in New York, the events of 9/11 naturally had a profound impact on my upbringing and worldview. My academic interest in national security was rooted in the high-profile terrorism that affected much of the Western world during my early childhood.

In August 2015, I landed on an airstrip in Kyrgyzstan that only a month before had been the U.S.-operated Manas Air Base. It officially opened just three months after 9/11 and had served as the gateway to Afghanistan for a generation of U.S. troops. There were still U.S. military cargo containers strewn about, but the tarmac also serviced the international airport for civilian flights in and out of Bishkek, the Kyrgyz capital. The discarded American munitions boxes on one side of the runway were contrasted by a half dozen Chinese Southern Airlines passenger jets parked at the terminal. Moving through customs was rather eerie, being a lone American among a crowd of Russian, Chinese, Turkish and Kyrgyz travelers. The post-American era had begun in Kyrgyzstan, as it is now in Afghanistan. A great societal change was underway, and as a walking icon of the recently departed imperial power, I could feel it.

The Schlegel Scholarship supported my research on the likelihood of a Kyrgyz-Uzbek conflict over water resources. In a region divided by mountains, glacier-fed rivers are the primary links among nations. Multinational rivers support agricultural economies in Central Asia, and Uzbekistan’s then-dictator Islam Karimov was making no secret of his desire to get more water from Kyrgyzstan – by force, if necessary. I was there to make good on my mix of geology and political science education from W&L, putting the liberal arts model to the test in a country that still had statues of Stalin and Marx on city streets.

Thankfully I had some local contacts, Bermet Zhumakadyr Kyzy and Kalys Zhumakadyr, both of whom studied abroad at W&L and graciously offered to show me around their homeland. Their guidance was incredibly helpful and allowed me to make the most of my week in the country.

In hindsight, I was very fortunate to have so many different people – from Commander Schlegel to my Kyrgyz foreign exchange friends – influence my path to that distant corner of the world. The only common thread among such a diverse group was everyone’s association with a small college in Lexington. Somehow, as I waded into the near-frozen headwaters of the Syr Darya River that August, our big world felt much smaller than ever before.

The recent American military withdrawal from Afghanistan brings a generational chapter in the region to an historic closure. But for those of us who studied at SCUSA and across the world due to events that began in the Afghan countryside, the imprint of Commander Schlegel on our lives will last much longer. Like many Schlegel recipients, I’m still working in the national security area, albeit now in the cyber realm. Hopefully those of us who have benefited from the Schlegel fund can continue to make a small contribution towards building a more peaceful future.” 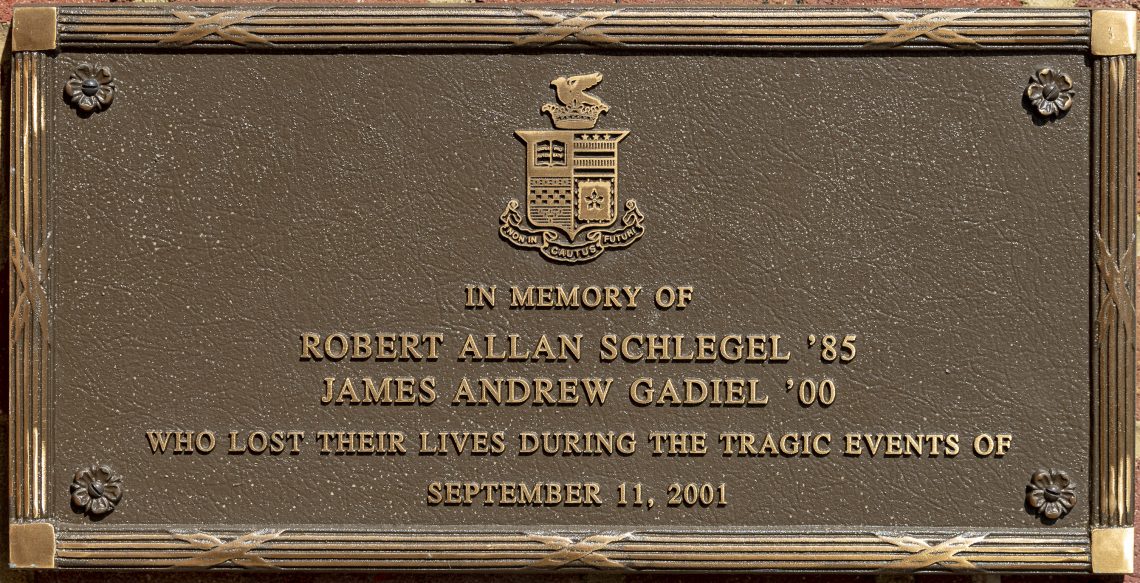 Memorial plaque for Schlegel and James Gadiel ’00, who also died in the 9/11 attacks.