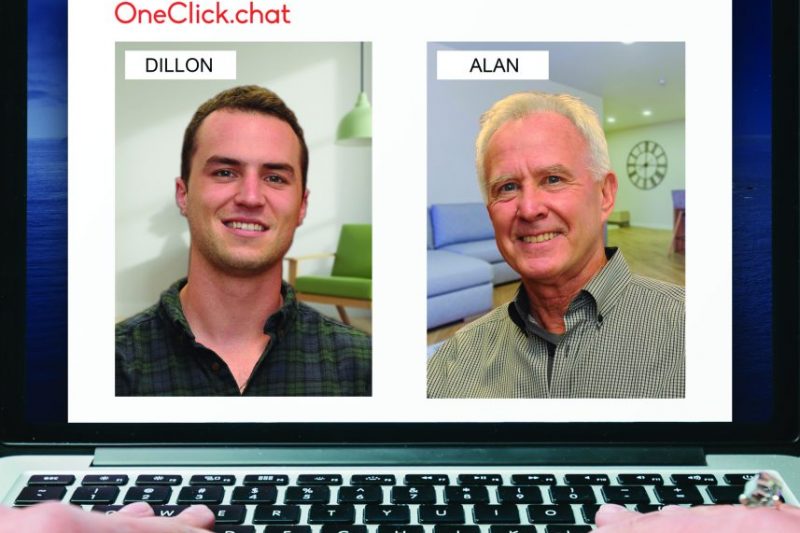 “You know, we can help ease the pain of being isolated. The platform is just easy. And people need easy right now.”

As COVID-19 spread across the U.S. and states issued shelter-in-place orders, Dillon Myers ’14 and Alan Gibson ’70 found themselves in a unique position to respond. Their video chat platform, OneClick.chat, was developed through a Small Business Innovation and Research (SBIR) grant from the National Institutes of Health (NIH), specifically to facilitate social interactions among older adults.

The original product focused on “a group of people who tend to be homebound or live alone or can’t go out and meet people in person regularly,” Myers said. “And then as the coronavirus was going on, we started to see that this is happening to everyone.”

Their partnership began at Gibson’s 45th reunion in 2016, when a conversation with a new acquaintance led to an introduction to Myers. Gibson told him about a business idea he’d had for years: getting people together for dinner over video chat. Myers thought it had merit, and by the end of the evening, they and Jim Mathews ’73, an old friend of Gibson’s who is now OneClick’s chief financial officer, were talking seriously about founding a company.

“There was an epidemic of loneliness,” explained Gibson, who worked as an art director in advertising for decades. “The New York Times was writing about it, The Wall Street Journal was writing about it. More and more adults were living alone, and I thought, well, all these people are at home by themselves at night. Wouldn’t it be fun to connect them over dinner?”

“In the last several years, a lot of research has shown the negative health effects associated with loneliness and social isolation.”

They called their first product PotLuck. As they tested the concept, they discovered older participants liked the idea but were turned off by the complexity of chat platforms like Skype and Zoom. “The three of us took a step back and realized there was an opportunity to build a platform using the latest technology, designed to be easy to use for older adults,” Myers said.

Shortly thereafter, Myers contacted Wendy Rogers, a professor working on the University of Illinois’ Collaborations in Health, Aging, Research, & Technology initiative. They partnered to apply for an SBIR grant from the NIH, aiming to design a platform accessible to older adults, even people in the early stages of dementia or Alzheimer’s.

They received their $150,000 phase one funding on the first try, which is rare.

Over the next two years, they worked with older adults to refine OneClick.chat and make it as user-friendly as possible. “They’re not shy,”Gibson said. “They say things like, ‘I don’t understand what that word means.’” Figuring out how to mute a microphone could seriously impact their ability to use the system.

“We really design based on the user’s actions,” explained Myers, whose background is in product design. “We don’t make a lot of assumptions about how people will use things. The NIH research grant allowed us to have focus groups and really involve our target users in the design process.”

They hit upon a few key innovations. OneClick is entirely browser-based, meaning users don’t have to download apps and add-ons. It also employs a concept called “rooms.” Each subscriber gets a short, unique link — e.g., OneClick.chat/JohnDoe — to send to people they want to chat with. Anyone who clicks the link can join in, no registration or account creation required.

NIH recently approved OneClick for phase two of its SBIR grant, worth $2 million. They will use the funds to study whether using OneClick improves health outcomes the same way interacting face to face does.

“In the last several years, a lot of research has shown the negative health effects associated with loneliness and social isolation,” Myers said. “It may have the same negative outcomes as smoking 15 cigarettes a day or twice the impact of being obese. So, I think focusing on that and creating a very easy-to-use, accessible way to socially engage caught the eye of NIH.”

These days, OneClick is getting more traffic than ever, especially after it extended its free trial period. “We’ve offered it to lots of individuals and organizations,” Gibson said, including caregivers conducting programming for older adults, such as knitting circles and book clubs.

“You know, we can help ease the pain of being isolated,” Gibson added. “The platform is just easy. And people need easy right now.”

Spring Forward
March set growth records across OneClick’s statistics, with usage 5.3 times higher than in February and 19.5 times what it was in March 2019. The platform has been used in over 39 countries.

Room 275
Myers and Gibson lived in the same room in Graham-Lees (aka Old Dorm in Gibson’s time), 44 years apart.

Of Entrepreneurs and Honor
Myers credits Professor Jeff Shay and the W&L Entrepreneurship Program with helping him find his career and supporting OneClick through its early stages. Both men said the Honor System immediately created the trust so essential between business partners in a startup.