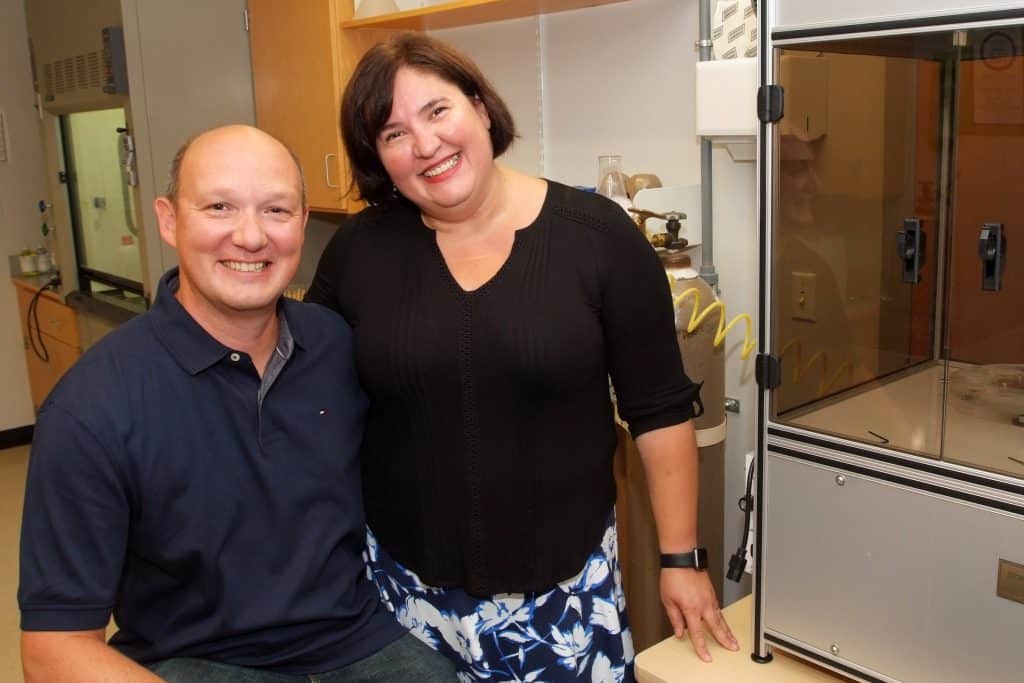 “We opened up our approach to them [the students] and let the creativity fly. We’ve had great success. We don’t settle for small projects that are not competitive at the national or international level.”

Introduction:
Dan and Irina Mazilu both attended Alexandru Ioan Cuza University, in Romania, behind the Iron Curtain. “Under the communist regime, everything was very strict,” said Irina. “We lived through a revolution that shaped us as people. Those of us who had passed the competitive entrance exams for our university took the same classes at the same time. I tell my students that I appreciate the United States education and all the choices they have, because we didn’t have that.”

The Path to the U.S.
Dan spent his junior year of college in Omaha, at the University of Nebraska, as an exchange student. He fell in love not only with America, but also with college football. “Nebraska was having great success in football at that time,” he said.

Neither knew much about the U.S. “One of the only American television series we were able to watch in Romania was ‘Dallas.’ Programming was very restricted in Romania. I don’t know why the regime allowed that particular series to air. Maybe it was to show the moral failings of America. Anyway, that was what we thought America was like.”

For graduate school, they landed first at SUNY Buffalo, and then migrated to warmer climes at Virginia Tech, in Blacksburg. Irina concentrated on the theoretical and computational side of physics, while Dan focused on the experimental.

In 2002, three weeks after defending her Ph.D., Irina took a one-year position at W&L. She jumped at the chance to join the faculty in a tenure-track position in 2004. Dan joined her as a full-time faculty member in 2008. “I was ecstatic when I was offered the position,” said Dan. “It’s academic Nirvana,” added Irina. “It’s a wonderful college, with wonderful students.”

The Nanoscience Program
“It’s strange that we didn’t start working together until 2006, “ said Irina. “I didn’t realize until then that all the theory I had been studying can be beautifully applied and confirmed by the experiments that Dan is doing. We started taking it very seriously and working together beyond the casual conversations about our research.”

At W&L, they are building a nanoscience program, although Irina said, “We are still far, far, from calling it a program.” Nonetheless, they teach classes on the subject together with their colleague Moataz Khalifa, visiting assistant professor of physics and engineering. Irina and Dan have published several papers on nanoscience research in first-tier journals, with W&L students as co-authors.

“Doing research with students at W&L was eye-opening for us as mentors,” noted Irina. “We opened up our approach to them and let the creativity fly. We’ve had great success. We don’t settle for small projects that are not competitive at the national or international level.”

“You literally see them grow up before your eyes,” said Dan. “The difference between the first week of summer research and the last week is incredible and so satisfying to us. When our students present posters at conferences, they are mistaken for graduate students or post-docs.”

“Our colleagues at other institutions find it surprising that we can conduct research at this level with our students,” said Irina. “We very fortunate for W&L’s support in terms of the students being able to travel to conferences. It’s important for them, and us, to get out of the bubble and mingle with other researchers.” 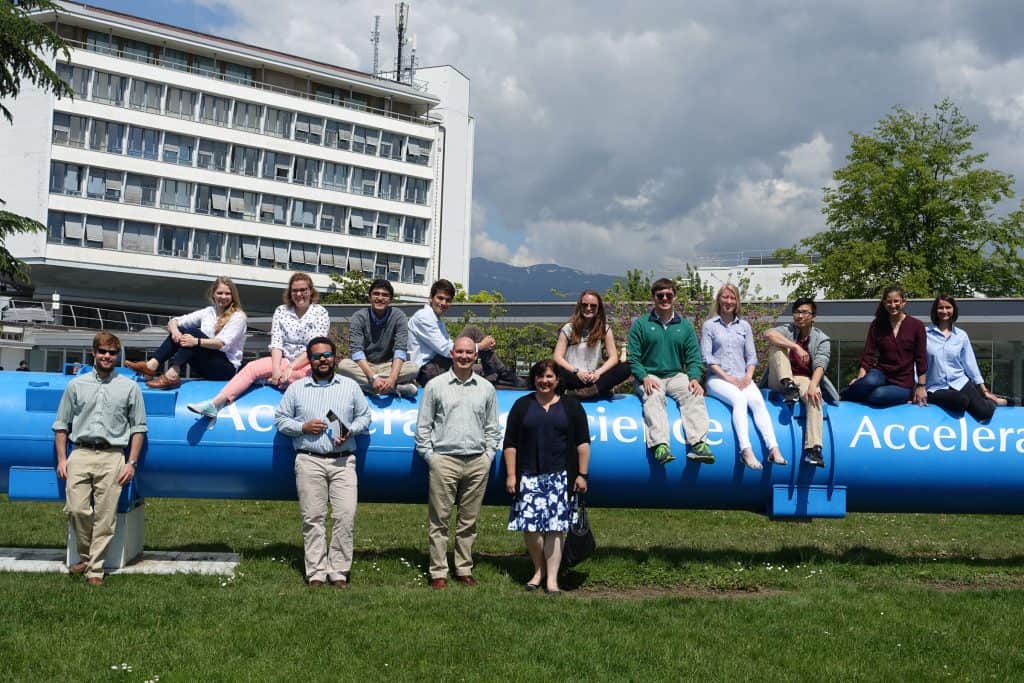 Taking a break at the huge superconducting magnet that used to be part of the Large Hadron Collider but is now out of commission and on display on the CERN campus.

In 2016, Dan and Irina, took a Spring Term class abroad to spend time learning about the Large Hadron Collider at CERN, the European Organization for Nuclear Research. The Mazilus have a collaborator there, giving the class access to behind-the-scenes tours of the facility.

“We don’t have kids,” said Irina, “so going from 0 to 12 overnight was a challenge. But it was a great experience. Some students were scared to travel to Europe, but during the trip they realized they loved Europe and that traveling is a wonderful experience. We had the opportunity to visit the Einstein museum in Bern and his home. We tried to give the students a taste of Swiss culture — literally cheese and chocolate.”

The trip resulted in an internship for one student, Stephanie Fouts, and led another student, Anthony Hodges, to join a Ph.D. program that has ties to CERN.

Sabbatical Plans
For their yearlong sabbatical, the Mazilus have extensive travel plans. They will return to their homeland to look at labs and equipment that will help them with their own nanoscience program at W&L. “Now that Romania is part of the EU, it has received a lot of funding for scientific infrastructure,” said Irina. “There are a lot of new techniques we can learn while we are there.”

In February, they are headed to Southeast Asia, to Vietnam and the Philippines, and then Iceland, to give lectures and establish new collaborations and strengthen existing ones. “We are grateful to have W&L’s support to have full-year sabbaticals for both of us at the same time,” said Irina. “We know that it is a once-in-a-lifetime professional opportunity.”

“The other reason it is important to travel to different places is that inspiration strikes in the most unusual places,” noted Dan. “Our goal is to get ideas and keep building out our program.”

Extra-Curricular Activities
Dan still watches college football, and both enjoy cooking for friends, students and colleagues. “I wish I could have a restaurant,” joked Irina.

Travel is also a hobby. “Even though we travel a lot by plane, we love road trips, as well,” said Dan. “We feel that now that the U.S. is our home, it’s really important to learn more about it. Travel is a moral imperative because it is transformative. It’s not easy on the body or on the wallet. But at the end of every trip, we come back better people. We’re crazy, we have the bug.” They have been to 49 of the 50 states, and Alaska is on their radar.

They also do a lot of reading, from sci-fi to fiction to poetry. “In college, we didn’t have a liberal arts education, and so we didn’t have the chance to read deeply or widely,” explained Irina. “I think reading helps improve our own writing, because we learn how to tell a story. Writing a research paper is telling a story. So is writing a grant. Physics is going on all around us, and we have to be good communicators to explain why it’s important and what it means.”