Defending the Herd Biology professor Bill Hamilton and his students continue to research the effects of a growing bison population on the ecology of Yellowstone National Park.

“I think we’re really lucky that we get to see both the lab work and the field work, especially as undergraduates.” 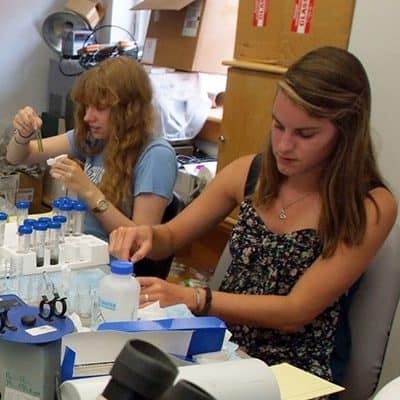 Students of biology professor Bill Hamilton conduct laboratory tests on bison dung they brought back from a research trip to Yellowstone National Park.

The word “beauty” may not immediately come to mind when considering the American bison, but a summer spent studying the ungainly ungulates allowed Sydney Lundquist ’17 and her fellow student researchers at Washington and Lee to see the National Mammal in a new light.

“I love bison!” Lundquist said. “They are beautiful. They are such big, majestic creatures.”

Along with Anna Alexander ’18, John Carmody ’18 and Kendyll Coxen ’18, Lundquist was able to observe the burly beasts in the wild during a June trip to Yellowstone National Park with biology professor Bill Hamilton. The summer research trip was part of a five-year project that aims to determine the impact of the growing bison population on the ecology of the park.

Specifically, this group of students is studying the effects of bison grazing on soil quality, which directly relates to the overall health of plant and animal life in the park, as well as to bison migration patterns. After returning to W&L with soil and dung samples, the students have spent every weekday, from 9 a.m. to 5 p.m., running laboratory tests on those samples. Their work on the project this summer will total about eight weeks.

In 1902, when Yellowstone began work to restore its bison population, only about two dozen of the animals remained in the park. Today, more than 5,000 bison make up two herds – the northern herd and the central herd. But not everyone is thrilled by their comeback; cattle ranchers who neighbor the park worry that bison will roam onto their land and transmit a disease called brucellosis to their cattle, although Hamilton says there is little evidence that would be possible.

Hamilton’s work is not concerned with brucellosis, but it could inform decision-makers on how many head of bison can live and graze in Yellowstone without having a deleterious effect on the land. Right now, an integrated bison management group has put the preferred cap at 3,000, a somewhat arbitrary number that is not based in science.

In 2013, Hamilton partnered with Douglas Frank of Syracuse University and Rick Wallen, head of the Yellowstone Bison Management Program, on a pilot project that examined the impact of bison grazing intensity on grassland processes. Becca Bolton ’12 assisted with that research while she was a student at W&L, and after graduation continued to do field work on the project as an employee of the National Park Service. Hamilton said she will wrap up that work this summer and head to veterinarian school in the fall.

That project, which involved clipping grass inside permanent exclosures to simulate bison grazing, determined that the areas studied could tolerate high levels of grazing without negative effects on grassland production. This new phase of research may prove that large numbers of bison at Yellowstone may actually improve soil health.

During Spring Term, another group consisting of 12 W&L students accompanied Hamilton to Yellowstone, where they applied simulated bovine urine in the field, took soil samples, then stuck ion exchange membranes into the soil. These devices were left to absorb ammonium, nitrate and phosphate until the June research group returned. The spring group also collected bison dung, returned to the labs at W&L, and analyzed the samples for ammonium, nitrate and phosphate.

“We came up with some rough estimates of the nutrient contribution per hectare that bison are contributing at each of those field sites,” Hamilton said, “and it was a pretty impressive number. The Park Service had no idea, and it encouraged us to go and do more.”

During last month’s visit, the students collected as many of the ion exchange membranes as they could find (some were stolen by ravens or pulled out of the ground by bison nibbling the grass). They also categorized the freshness of bison patties on a scale from 1 to 5, with 1 being fresh and 5 being old and hard, and collected more dung samples. They came back to campus with 40 pounds of bison dung now chilling in a refrigerator in Howe Hall.

After five days of trekking to and from field sites, and poking at buffalo flops, the students took time out to enjoy the scenery. One of the spherical images shot by Hamilton on the trip shows him with the students, overlooking a stunning waterfall on the Yellowstone River in the Grand Canyon of Yellowstone. In addition to bison, they saw a wolf, black bears, and coyotes feeding on a dead elk.

Both the soil samples and the dung samples will be tested in an effort to further determine what materials are being absorbed into the soil in Yellowstone. The laboratory work requires long hours and many laborious steps, but the students said they enjoy it as much as the field work.

“I think we’re really lucky that we get to see both the lab work and the field work,” said Alexander, “especially as undergraduates.”

Lundquist and Alexander are Howard Hughes Medical Institute fellows who have been involved in the project for two years. Carmody and Coxen are Summer Research Scholars. These four students were assisted in the laboratory this summer by Zach Franci, an Advanced Research Cohort student from Dallas, Texas.

Lundquist, who said she puts up with good-natured ribbing from her family about her work with dung, plans to write a research paper during the next academic year. She hopes the findings will help to protect the American bison, a species that was once nearly decimated by man.

Learn more about the W&L bison research on the group’s Facebook page.

See a 360 image of Hamilton and his students at Yellowstone.