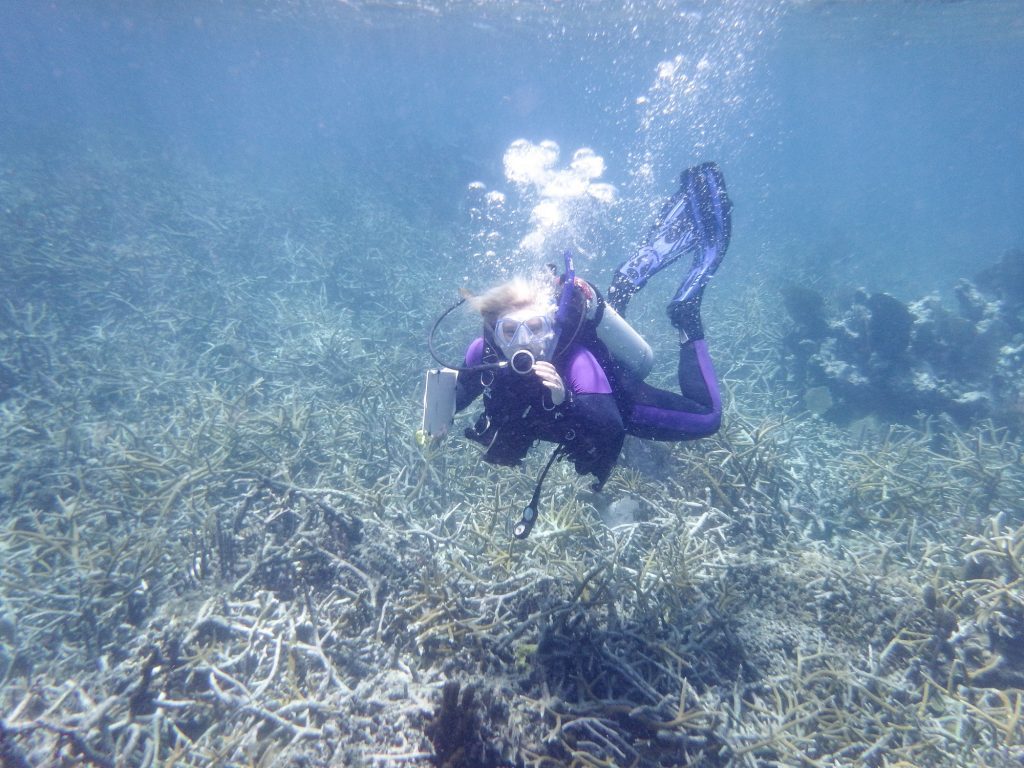 Diving into Research This summer, Ginny Johnson '20 served as a peer mentor to nine rising sophomores as part of the Keck Geology Consortium trip to Belize, where Professor Lisa Greer continued her research project into the staghorn coral population.

“I was reminded of how incredibly fortunate and privileged I am to go to an amazing school that affords me the opportunity to do amazing things like getting paid to SCUBA dive in Belize for summer research as an undergrad or spending multiple Spring Terms traveling the world with professors I adore.”

Tell us about your summer experience.

This summer, Professor Lisa Greer led a five-week Keck Geology Consortium project for nine rising sophomores (and one rising senior peer mentor) from schools around the country to Ambergris Caye, Belize to study the coral reef. The goal of the project was to measure how much of the once-dominant staghorn coral is still standing after years of detrimental factors, such as rising ocean temperatures and hurricanes, have decimated the reef. We took pictures of these corals along an established stretch of reef and then painstakingly digitally traced every single branch of living staghorn coral in every picture. This allowed us to quantify the percentage of the reef that is still living coral and compare it to data from previous years of this study.

More broadly, the goal was to encourage budding scientists to explore what research is like and to spend the summer pursuing reef-related research projects. This led to three avenues of research that we followed: the effect of relatively recent seaweed blooms on water quality, the relationship between algae, herbivores and the reef, and the morphological differences between a few key coral species, analyzed using 3D modeling.

What has been your specific role in that project?

As peer mentor for this project, I served several roles. I oversaw the organization of data collected in the field, ensuring it was organized in such a way that everyone could understand it when we made it back to campus. Weeks later in the lab, it can be challenging to remember details from the field. By clarifying any questions at the end of every day in the field, I ensured we were collecting good data for the projects. I also had to ensure that data collected by 10 different people on six different topics was organized in a logical way.

In addition to my role in data collection, I made certain the Keck participants were safe while SCUBA diving. Most of them had never dived before this summer. Keeping track of how much air you have left in your tank, dealing with ocean currents, and staying buoyant enough but not too buoyant are all difficult. Adding data collection to that is a huge feat. I ensured they were comfortable both as novice SCUBA divers and novice researchers.

I also served as an RA for the Keck participants, which meant planning fun activities for evenings and weekends and making sure they were safe and happy. I took them hiking in the beautiful mountains of Rockbridge County, I stayed late with them in the lab to keep up morale, and I took them to the local clinic in Belize to deal with a minor ear infection. It was an all-encompassing job.

Did you have an independent research area within the larger project? If so, what was it?

My role in this project was more about facilitating the students’ projects in any way I could. I fixed problems with data analysis in Excel, critiqued posters that we’ll be presenting at the American Geophysical Union conference in December, and provided context for their work with data from previous years. I was also responsible for the data processing of the percent live coral cover pictures, which is really the backbone of Professor Greer’s project which began in 2011.

What experiences and opportunities set you up for this position?

During my first year at W&L, I took Professor Greer’s climate change class, in which she mentioned her research in Belize. I was intrigued. The next year, when she taught a Spring Term class in Belize about corals, I jumped at the chance to take it. Learning about the many species of corals and the many ways they influence and are influenced by their environment was amazing. Seeing the corals in their natural habitat after learning about them in the classroom brought experiential learning to a new level.

I loved that class so much that I joined Professor Greer for her research last summer, thanks to the funding from the W&L Summer Research Scholars program and the Geology Department’s R. Preston Hawkins IV Award. I was so passionate about the research—both diving out in the field and data processing at home in the lab— that I applied for more funding from the Geology Department and continued work on the data processing throughout Fall Term. When Professor Greer mentioned she was going to lead a Keck project to Belize this summer, I had to be a part of it.

What’s the best part about working on this project with younger students and students from other schools?

I loved that the students were incredibly passionate about a project that I have cared so deeply about for the last year. It was so cool to share in their excitement and see the different directions of research they wanted to explore. It made me realize how much I’ve grown since I was in their position, both in my understanding of the reef and as a geologist and environmentalist.

Seeing W&L through the eyes of students from other schools gave me a fresh perspective of the place I’ve called home for the last three years. They were continuously amazed by how beautiful our campus is and how nice all of our facilities are—from the dorms we lived in to the kind of scientific equipment that is available for students to use. I was reminded of how incredibly fortunate and privileged I am to go to an amazing school that affords me the opportunity to do amazing things like getting paid to SCUBA dive in Belize for summer research as an undergrad or spending multiple Spring Terms traveling the world with professors I adore.

What have you found most challenging this summer?

I didn’t really know what to expect from this experience. Even though I had done research with Professor Greer last summer and worked on the same long-term project, this was completely different. Last year, there were only two student researchers with Professor Greer in Belize for one week; while there, we took pictures to determine live coral coverage and then had seven weeks to analyze the information in the lab. This summer, there were 10 of us in Belize for two weeks, taking pictures for the live coral cover project, but also collecting data on urchins, damselfish, algae cover, seaweed, ocean pH and so much more. We then had only two weeks on campus to analyze. There were so many moving parts that needed to be done in much less time.

What’s it been like to work so closely with a faculty member on a project she is very passionate about?

It is absolutely amazing! I love working with Professor Greer. Her passion for the project and the corals is infectious. She is kind and generous, making sure her student researchers truly feel like we have ownership over the data we collect and analyze with her. Plus, as a woman in STEM, I appreciate having an impressive female scientist to look up to.

Did you enjoy seeing Belize again?

I absolutely LOVE traveling. I’ve spent a fair amount of my undergrad experience abroad: a summer in New Zealand, a semester in Australia, and now three trips to Belize with Professor Greer. It’s so cool to be able to travel with someone who knows the area so well and who knows locals who can really provide insight on what the island is like and how the reef has changed over the years. Also, I cannot emphasize enough how stunning this coral reef is. I went diving in the Great Barrier Reef while I was in Australia and the Mesoamerican Reef puts it to shame.

Has this had an impact on your future career goals?

When I was a freshman at W&L, I had no intention of pursuing research. Perhaps that is because young girls are not encouraged to go into STEM careers, but maybe I just didn’t understand what research can be. Sometimes research is the frustration of data analysis in Excel, but sometimes it’s diving with friendly sharks in the Caribbean or learning about some of the most interesting endangered species the world has to offer. Plus, if you really love the work you do, even the frustration of various computer programs is worth it. I’m still not sure that research is in my professional future, but I’m much more open to it than I used to be thanks to doing this work with Professor Greer.

What would you say to a student who is thinking about applying to or attending W&L?

Do it! There are so many opportunities available at this small liberal arts school that you cannot get at a bigger school. Small classes mean that professors are truly invested in you as a person, even long after you’ve finished their class. Plus, the Honor System and Speaking Tradition set W&L apart as a wonderful place to call home. You don’t notice how much trust you have in the community until you leave campus and strangers don’t greet each other and you can’t leave your laptop out to come back hours later with the certainty that it will be there. The W&L community is truly one of trust, honor and a friendly spirit.

I knew I wanted a small liberal arts school that was fairly close to my hometown in West Virginia, and I was impressed by W&L’s reputation as well as the Honor System and Speaking Tradition. At the end of the day, when I visited campus (for the third time), it just felt like where I needed to be.

I’ve always been super passionate about the environment—I can remember being a little kid and going on walks with my mom to pick up litter in our local park—so majoring in Environmental Studies was an obvious choice. I knew I wanted a second major, but I didn’t know what, specifically, I wanted it to be until I took Intro Geology my freshman year. I loved the subject and the professor so much that I decided it was the one.

What is your favorite Lexington haunt and what do you love about it?

Boxerwood! I love being able to just disconnect and hang out in nature, exploring their trails.

Pre-O Week! I loved the sustainability trip when I was a first-year student, and I have loved being a trip leader for it every year since.