Escape to “Inscapes” in Watson Galleries The exhibit of paintings by Evelyn Dawson, which includes student reflections and a student-curated playlist, is part of Museums at W&L's new Mindfulness Initiative and the 20th anniversary of the Women, Gender, and Sexuality Studies Program. 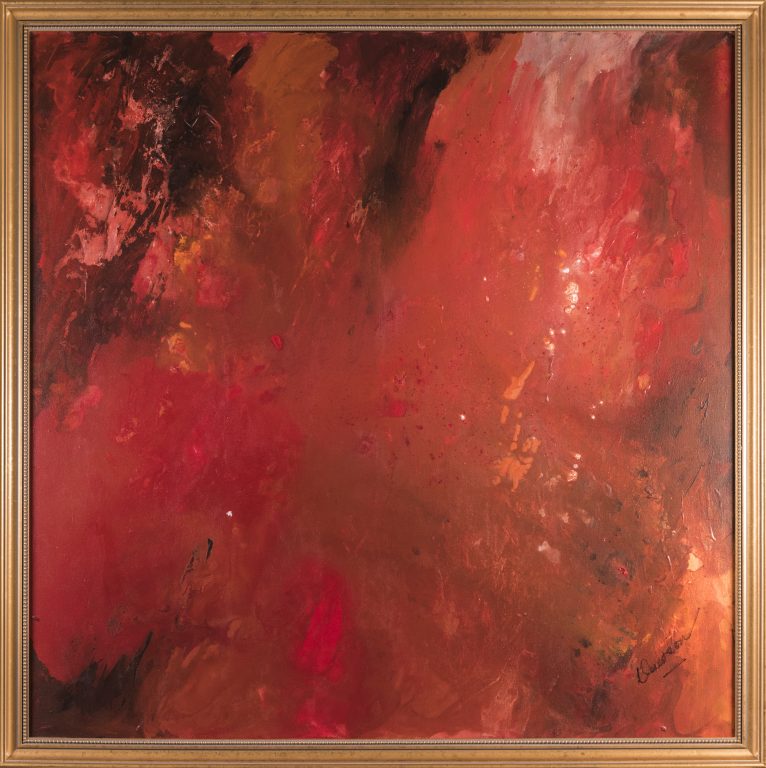 “Judgment,” an acrylic on canvas by Evelyn Dawson

“Inscapes: Paintings by Evelyn Dawson” is a new exhibition recently opened by the Museums at W&L that features colorful abstract paintings by an artist whose works can be found in buildings all across campus. The exhibition, which includes student input, is one of the featured events celebrating the 20th anniversary of W&L’s Women’s, Gender, and Sexuality Studies Program. It is also part of the Museums’ new Mindfulness Initiative for the campus community.

As visitors enter the Watson Galleries, a new interactive reflection board asks the question “What thoughts or feelings do these objects evoke for you?” Select W&L students were invited to compose initial responses to post on the board, and Estrella Burks-Parra ’23, a theater and politics major, was drawn to a red painting titled “Judgment.” She wrote: “… this is not about light vs. dark or good vs. evil, but instead about the harmony, peace and protection that we are granted once we achieve this beautiful balance, where our judgments can do the greatest good, preventing calamity and achieving divinity within our souls.” The entire W&L community is invited to post their own reactions on the board.

Along with the reflection board, the exhibition includes a curated music playlist for visitors to enjoy while visiting. In partnership with wluLex, W&L’s student-run social media team, each of Dawson’s paintings has been paired with a song. Students who contributed include Diwesh Kumar ’24, economics major; Amelia Lancaster ’22, Chinese and art history major; Laurie Lee ’22, computer science major; Emmie McElroy ’23, environmental studies and studio art major; Jerónimo Reyes ’21, biology and art history major; and Angela Tu ’24, Chinese and business administration major. By using a QR code located on the painting’s label, visitors who download the Spotify application can listen to music as they reflect on each work.

The six paintings in this exhibition represent only a small segment of artwork by Evelyn Dawson (1909–1990). She is best known as the fashion designer “Suzy Perette,” the very popular and affordable mid-20th century American label of French-inspired dresses. In the post-WWII era, when most women returned to domestic roles and were defined by their husbands’ names, she kept “Dawson” as her professional appellation. For a mid-20th century woman who was married twice, it was a statement of creative independence. In addition to fashion design, Dawson was a multi-talented artist. She danced in her twenties with the Denishawn Dance Company, then a leading American dance troupe and innovator of modern dance. During her lifetime, she was also a prolific painter and author, writing four novels and much poetry.

In 1944, Dawson married James A. Fitzsimmons, a painter and photographer. While living in Los Angeles, they socialized and worked with Jungian analysts James and Hilde Kirsch, as well as surrealist photographer Man Ray, for whom Dawson sat as a model. Those contacts became formative influences on the artistic couple. In 1949, they moved to New York City, where Fitzsimmons worked as an art critic and Dawson became “Suzy Perette,” a design position she held until 1963, when she opened her own custom dress shop.

In a 1955 syndicated newspaper article, Dorothy Roe, women’s editor for the Associated Press, called Dawson a “contender for the title of world’s busiest girl” and described her as “a wise-cracking brunette dynamo known as Suzy Perette in the fashion business, Evelyn Dawson to her friends and Mrs. James Fitzsimmons after office hours. ‘I answer to anything, including “Hey, you!”’ says Suzy-Evelyn, finishing sketches for six new dance dresses, talking to three magazine editors at once and helping an adoring teen-ager select a dream [come true] for the weekend prom.”

In the article, Roe also mentioned that Dawson was painting “modern works.” The artist would later call her collective works “inscapes,” a word that combines “interior” or “inward” with “landscape” to indicate that these abstract works flowed from her unconscious. The term “inscape” was coined by 19th century poet and priest Gerard Manley Hopkins, who defined it “as the very soul of art.” The word was adopted by 20th century visual artists, including surrealist Roberto Matta and American abstract expressionist artists James Brooks and Jane Frank. The term is still used in the visual arts to refer to works that reflect an artist’s “internal landscape.”

Dawson’s paintings reflect a knowledge of abstract expressionism, an art movement that originated and evolved in New York during the 1940s. Influenced by the surrealist interest in the unconscious and the theories of psychoanalyst Carl Jung, artists like Jackson Pollock, Mark Rothko, Helen Frankenthaler, and Clyfford Still created very large, non-objective and expressive works that were made spontaneously to elicit emotions. Pollock and Rothko represent the two primary directions of the stylistically diverse movement: action and color field painting. Dawson merged elements of both styles in her colorful and expressive works, creating large-scale paintings that employed modern materials of acrylic paint and sometimes large sheets of Plexiglas. 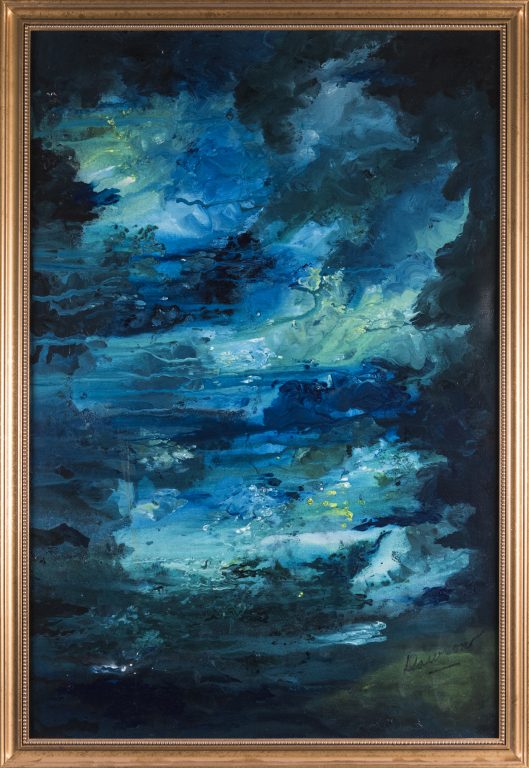 Divorced after 1955, Dawson married songwriter and radio/TV salesman Larry Wynn in 1959. A 1934 W&L alumnus, Wynn donated over 75 of his wife’s paintings to his alma mater in 1995, five years after her death. These works, which probably date to the 1970s and ’80s, are subjective emotional expressions that were created instinctively, unlike echoes of her earlier works that are found in boxes of Larry Wynn’s papers housed in Leyburn Library’s Special Collections. Several folders contain small pencil sketches – perhaps plans for paintings now lost – that include figures, abstracted spaces and labels for specific colors. Dawson’s collective artworks, both literary and visual, illustrate her interests in dreams, world cultures, human evolution and planetary futures. According to Wynn, his wife never exhibited any of her paintings nor published her poetry or novels during her lifetime. Perhaps these artistic ventures were more private to Dawson than her very public persona as a fashion designer.

Apparently, Dawson’s first exhibition was posthumous, mounted in 1996 in Huntley Hall on the W&L campus in celebration of her creative spirit. Today, many of Dawson’s paintings are displayed in public spaces across campus, including Huntley Hall, Leyburn Library and the E Cafe in Hillel House. And six are now featured on exhibit to promote mindfulness and in celebration of women’s history.

More About the Mindfulness Initiative

This exhibition and accompanying programming are part of Museums at W&L’s new Mindfulness Initiative, a revitalization of the galleries as a place for wellness and reflection. Beginning in Fall Term 2020, the museums launched Artful Yoga, a pilot program with W&L Athletics that was created in response to our students’ need to have more low stress, in-person events. With its success, the program has continued into Winter Term and will be offered again in the spring. Artful Yoga is open to current W&L faculty, staff and students and is held on select Mondays at 10 a.m.

In addition to “Inscapes,” the Watson Galleries also showcase the Senshin’an Japanese Tea Room and the temporary exhibit “Breaking the Chains: Ceramics and the Abolition Movement.” Next door, the Reeves Museum of Ceramics features Asian, European and American ceramics spanning some 4,000 years. The Reeves also highlights the original work of Louise Herreshoff Eaton Reeves, an early 20th century American painter noted for her impressionist and fauvist works. Visitors can engage with the collection through a new smartphone self-guided tour.

The second in our new series of virtual gallery talks will take place on Wednesday, April 7 at 5:30 p.m. Titled “Women in the Arts: Out of the Margins, Into the Light,” the talk will be moderated by Clover Archer, director of the Staniar Gallery, and will feature Patricia Hobbs, senior curator of arts, and Domnica Radulescu, Edwin A. Morris Professor of Comparative Literatures. Using examples from the museums’ art collection and from the performance arts, they will discuss social and political commentary made by women artists and the challenges that faced them as trailblazers.

March is, after all, Women’s History Month. Come join us!

Because of the ongoing Covid-19 pandemic, entry to the galleries is restricted to students, faculty and staff. Masks are required and occupancy numbers are limited. The Watson Galleries, as well as the Reeves Museum of Ceramics, are open Tuesdays and Wednesdays from 10 a.m. to 5 p.m., in addition to the last Friday of each month from 3 to 7 p.m. It is very easy to sign up for timed-entry reservations through Calendly. 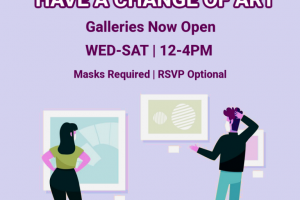