From Army Ranger to Chick-fil-A Owner Quincy Springs ’02 didn't think college was in his future — until he spent a summer at W&L.

“When you’re in a position of leadership, it’s incumbent upon you to make that experience be the best it possibly can be.” 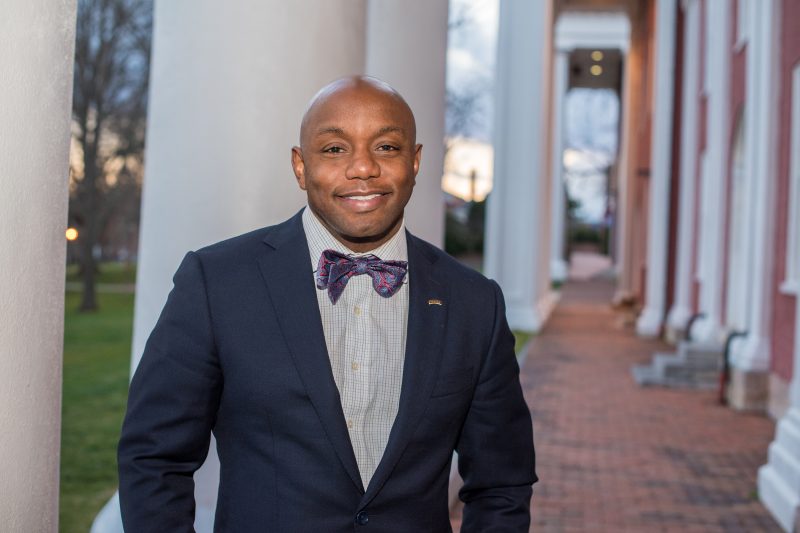 In March, Quincy Springs ’02, standing on the stage of Washington and Lee University’s Stackhouse Theater as the keynote speaker for Black Reunion Weekend, said, “I’m not really supposed to be here.”

The 2002 graduate explained that his introduction to W&L came through W&L’s Futures Program, which recruited minority students, usually from northern Virginia.

“For some reason, W&L decided to open the program up to my area,” said Springs, who grew up in Buchanan, Virginia. “So Suzy Thompson [now associate director of Special Programs] came down to James River High School, about 25 miles south of Lexington, and invited me to try the program out. My school had about 100 students, and most of them don’t go on to college, at least not to a place like W&L. Even my mom didn’t think I would be going to college. But from that summer program, I got a taste of what W&L was like and the possibilities that might be available to me.”

What hooked him was a talk by the Hon. Bill Hill ’74. “He was on the Board of Trustees at the time and came to campus to speak to the students in the Futures Program,” said Springs. “I’d never seen a black man like that in my entire life. I didn’t think they existed. I hung on his every word. I immediately identified with him, and said to myself, ‘I want to be like him.’ ”

At W&L, Springs thought he would focus on business administration. “Up to that point in my life, I had no examples of successful black men that I could look to. Period. I thought it was very attractive to consider myself as a businessman who would carry a briefcase, wear a suit and talk on the phone. I had every intention of coming here and spending most of my time in the C-school. But I sat down in Professor Lad Sessions’ class, and there was a discussion on whether animals could think or feel. I wanted more of that, so I ended up taking philosophy class after philosophy class.”

Springs credits a host of W&L faculty and staff for the support system they provided. “My philosophy professors were phenomenal — Professor Sessions and I talked regularly. Other important people were professor Ted DeLaney ’85, Harry Pemberton, Larry Stewart and Barry Machado. I also had strong connections with the staff — Brenda Hartless, Vera Merchant, Nadine Staton, Iska King and Melvin Davis. They all looked out for me.”

As well as serving as a peer counselor and president of the Interfraternity Council and playing varsity basketball, Springs served in the ROTC at Virginia Military Institute.

After eight years of service, Springs left the military at the rank of captain. Some of his awards include the Bronze Star Medal, Meritorious Service Medal, Army Commendation Medal and Combat Action Badge.

Three months later, he joined Walmart, which was recruiting junior officers from the military for its manager-training program. He started out as a general manager of a store in Howell Mill, in Atlanta, then was hand-picked to take over the management of a store in Vine City, on the west side of Atlanta.

“This was an area rich in the civil rights movement,” said Springs. “However, it is now a dilapidated neighborhood, with a considerable amount of poverty. It used to be a food desert before the Walmart was built.”

Springs worked hard to repair past wounds. “Walmart invests in its communities, and I wanted to take it to another level, “ he explained. “I wanted to go into the community and establish a relationship right away. Some of the things I was able to do through partnerships with other organizations was feed 1,500 homeless people and provide 2,500 book bags and other school supplies to kids who needed them. We also fed over 700 families over the holidays, and we’ve gone into the communities and done neighborhood improvement projects. We made over 1,000 sandwiches for homeless women and have given out $30,000 in community grants to local organizations. We’ve made our presence felt. In addition to that, we hired people from the community.”

He points to two moments that explain his commitment to others. The first is from his Ranger training program, when he was rowing a Zodiac through the swamps of Florida. “It’s the coxswain that calls out the orders for rowing,” recalled Springs. “There I was, strapped into this boat, and the left side of my body was in pain because I had worked so hard rowing all day. I was determined to learn how to be the coxswain because I wanted the next time I was on one of those Zodiacs to be better than what I had gone through. When you’re in a position of leadership, it’s incumbent upon you to make that experience be the best it possibly can be.”

He also remembers reading a book in which a little boy playing the piano is upset because he is struggling to play the music. “The boy tells his teacher, I can feel the music in me, I just can’t make my hands go right,” said Springs. “That describes what I want to do — to help people make their hands go right. Whatever talents are in them, to help channel that to a good outcome. That’s part of my disposition, and that’s what I’ve tried to do whenever I’m in a leadership role.”

Almost 15 years after he graduated, Springs was thrilled to be on the Stackhouse Theater stage, just like the man he admired as a high school student, who was now in the audience listening to him. “The place that showed me what was possible is where I’m now giving a speech. It’s come full circle for me.”