From Politics to Park Ranger Studying the unlikely combination of geology and politics prepared Nova Clarke ’96 for a career as an award-winning environmental educator. 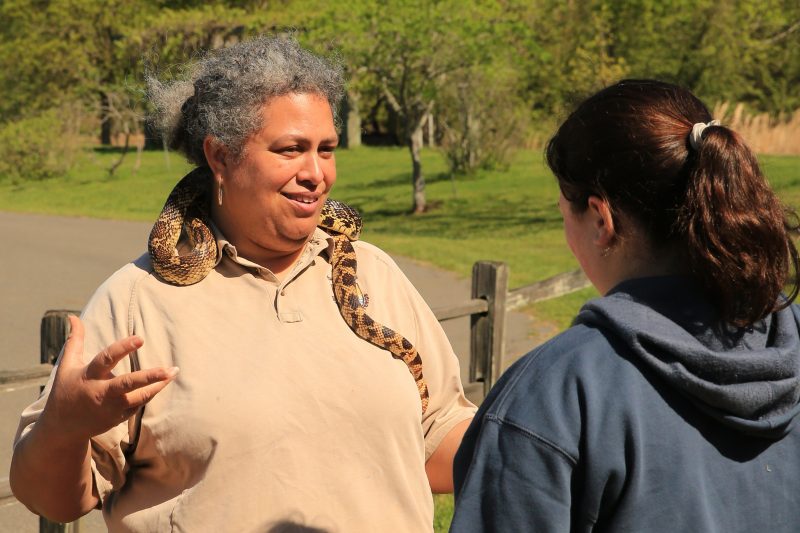 Miami native Nova Clarke ’96 and her parents appreciate the irony of this city girl becoming a refuge ranger. “My parents really don’t know how I became a ranger,” Clarke says, laughing. “I am much more of an outdoors person than when I was growing up. I’ve discovered I prefer more rural areas with less people and more nature. That’s a big change from growing up in Miami.”

Clarke serves as education specialist and refuge ranger at Black Bayou Lake National Wildlife Refuge, in Monroe, Louisiana. In February, the Louisiana Wildlife Federation named her Conservation Educator of the Year for her environmental education programming at Black Bayou as well as for
her outreach work in the community.

Growing up, Clarke was set on becoming a lawyer. But that idea started fading at W&L when she took David Harbor’s introduction to geology. “I ended up taking more geology classes and did a Spring Term field-mapping class out West, and fell in love with the West,” she says.

Clarke double-majored in politics and geology and environmental studies and became involved with the Outing Club. “That got me outside and exposed to nature,” she says.

From Politics to Park Service

On the political side, she took part in two Washington Term experiences, one with the AFL/CIO and the other with the White House. “From that internship, I flew to Alaska and did an internship in the summer with the University of Alaska,” she says. “It was around then I realized I didn’t want to go to
law school.”

She landed her first job with the National Park Service in 1998 as a seasonal ranger in Colorado and stayed with that organization until 2012. During that time, she worked at a variety of sites, including Utah’s Canyonlands National Park, Arizona’s Rainbow Bridge National Monument, and the Tuskegee (Alabama) Institute National Historic Site.

She began working as an interpretive ranger at Black Bayou, part of the U.S. Fish & Wildlife Service, five and a half years ago. “A big part of my job is education,” she says, adding she often works with schoolchildren on field trips. “It’s important to get kids outside and connected to the environment.”

Many of her interactions include two non-venomous Louisiana pine snakes. “They do road trips with me to meet all the kids,” she says. “We also have a small exhibit with animals that includes three little alligators.”

One of her biggest passions is getting people outside at night to explore the dark “so they can realize the dark is not scary. There are lots of stars,” she says. “I do a lot of night programs like frog walks, monthly full-moon walks, and a haunted nature trail at Halloween.” 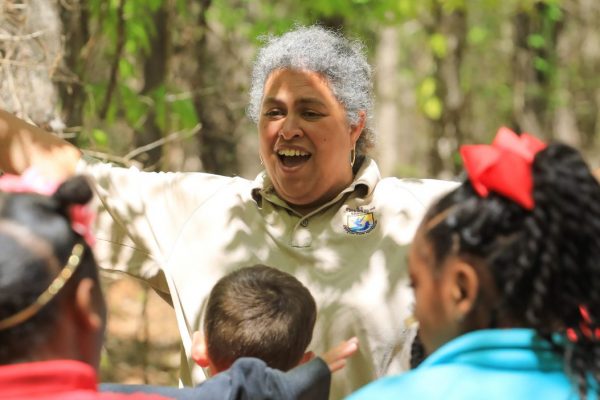 Nova Clarke works with a group of children in her job as a park ranger.

Through her work as a ranger, she’s discovered she’s much more independent than she thought. “I have a lot of self-reliance now,” she says. “I’ve figured out who I am.” During her time at W&L, she was an outspoken liberal. “I was always the weirdo,” she says. “I keep in touch with Professor William F. Connelly Jr., in the Politics Department, who was my Washington Term advisor. Politically, we butted heads a lot.”

Her experiences at W&L have been invaluable in her life and work. “I’ve learned to listen to other people and realize that everyone has their own valid opinion and that you treat everybody as an equal. You don’t judge,” she says. “Those lessons make it easier for me to do my job now.”

FAVORITE PROFESSORS: William F. Connelly Jr., the John K. Boardman Jr. Professor of Politics; Edgar Spencer ’53, Ruth Parmly Professor of Geology Emeritus; and David Harbor, professor of geology. “All three had a huge role in how I ended up doing what I do.”

FAVORITE CLASS: Geology classes, “because they got me outside.”

ACCOMPLISHMENTS: She was one of the founding members of the Habitat for Humanity chapter at W&L. She also was president of the College Democrats her senior year.