Georgia On My Mind Richard Bidlack, the Martin and Brooke Stein Professor of History, writes about reconnecting with a former student in her hometown of Tbilisi, Georgia, 27 years after she was an exchange student at W&L. 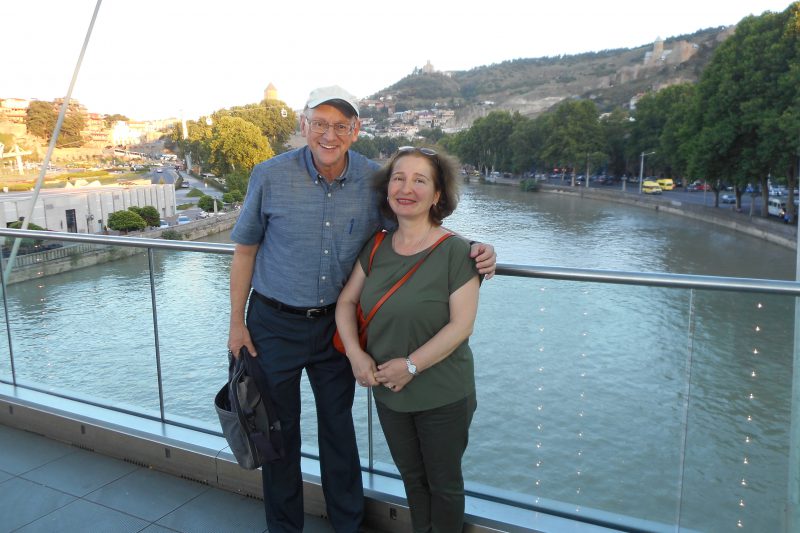 Richard Bidlack with Nona Mchedlishvili on the Peace Bridge in downtown Tbilisi.

During the 1988–89 academic year, Washington and Lee University hosted three students from the Soviet Union. They were among the very first Soviet undergraduates to study anywhere in the U.S. without official chaperones. One of the three was Nona Mchedlishvili, from Tbilisi, located just south of the Caucasus Mountains in what was then the Georgian Soviet Socialist Republic. Nona, who had received notice that she had been selected for the exchange program just three days before she departed for the U.S., immersed herself at W&L in mastering English and studying journalism.

During Spring Term of 1989, I led 30 students on the university’s first and only study tour of the Soviet Union and communist Poland. I included Tbilisi in the itinerary and planned to visit Nona’s family, while she completed her year at W&L. But on April 9, not long before we departed Lexington, Georgian nationalists staged a massive anti-Soviet demonstration in central Tbilisi. Soviet army troops brutally crushed the rally. Twenty demonstrators were killed, and hundreds were injured. Tbilisi was immediately closed to foreigners, and the W&L group was diverted instead to Sochi (the site of the 2014 Winter Olympics) along the Black Sea. Nona and I were shocked by these events and very disappointed that the group could not meet with her family.

Nona Mchedlishvili during her year at W&L (1988-89) as an exchange student.

Nona returned home in June 1989. Before the dawn of the internet, and when the antiquated Soviet phone system made placing a phone call from Lexington to Tbilisi extremely difficult, she and I lost contact. By late 1991, the Soviet Union was falling apart, and Georgia descended into chaos and civil war for two years, which included street fighting in downtown Tbilisi. Nona endured these hardships and pursued her career in journalism, eventually becoming a correspondent for Radio Free Liberty.

A few years ago, Nona and I reconnected through Facebook. This past summer my wife, Nancy, and I traveled to Tbilisi to gather insights and information for a course I’m preparing on the history of the Caucasus region and Central Asia. We enjoyed a wonderful reunion with Nona and became acquainted with her husband, Konstantin (Koka), and their teenage daughter, Mia.

While walking through Tbilisi’s picturesque old town, with its mountain vistas and churches dating back to the sixth century, and over glasses of local wine and a scrumptious meal of khachapuri (a cheese-filled bread) and other delicacies that Nona and Koka prepared, we filled each other in on the contours of our lives over the past 27 years. Nona reminisced about the teal dress with matching shoes that Nancy lent her for the 1989 Fancy Dress ball. Nona also described the five terrifying days in August 2008 when Russia invaded Georgia and reached within 25 miles of Tbilisi. During that brief war, Nona and Koka sent Mia to relatives in the countryside as Russian planes bombed targets in and around Tbilisi.

Georgia has recovered remarkably well since the war. The country’s reputation for warm and generous hospitality has attracted many visitors from Europe and North America. My wife and I look forward to further developing our relationship with an exchange student from decades ago.